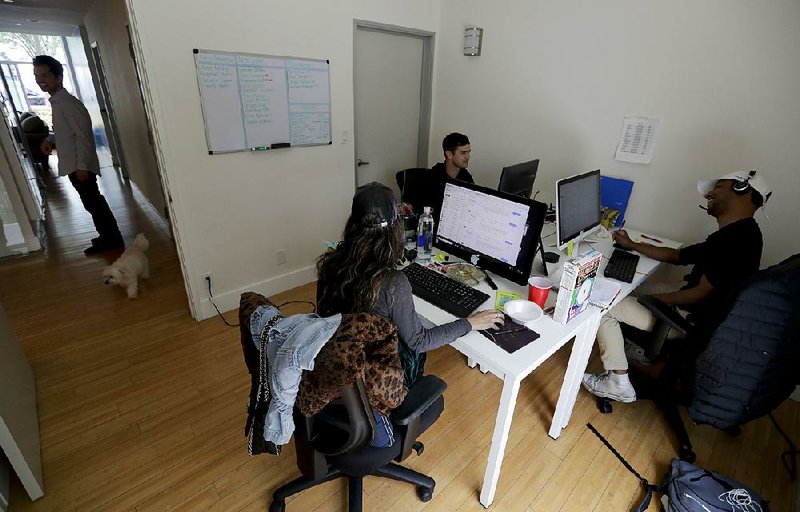 In this photo taken in late May, people work in the offices of Hey-Tutor, an online company that matches tutors with students in Los Angeles.

NEW YORK -- The age-old issue came up again recently: A potential client asked Nate Hartmann, "Hey, how old are you?"

Since Hartmann founded Yellow Box in 2010 at age 18, he's encountered skeptics who doubted his company could design websites and create online marketing strategies. Some clients even set out to teach them.

"They tried to run us, instead of working with us to achieve their goals," says Hartmann, whose company is based in Chicago.

Not being taken seriously is an obstacle many young entrepreneurs face. There are others, like being a boss without experience, or not understanding some legal and financial issues. But being young also has advantages. Though they may still have schoolwork to do, most owners don't have responsibilities like families or mortgages to distract them. And they bring fresh eyes to creating products and services.

"I didn't have preconceived notions, didn't have any processes to shake," Hartmann says. Many of his competitors worked at larger marketing companies, he says, and therefore "do things that aren't efficient. But that's what they do because they did it at the last place."

Nearly 545,000 companies owned by people under 25 were noted in the Census Bureau's 2012 count of established businesses, the most recent statistics available. That was 2.4 percent of all the companies in the survey. But it's certain that thousands of other young people, including those inspired by Facebook's launch by a 19-year-old Mark Zuckerberg, have started businesses that weren't counted or didn't last long.

When Tance Hughes went into business making screen-printed T-shirts and other apparel at age 17, "sometimes my age hindered my ability to secure a deal in the early days because many potential customers simply didn't trust that I could get the job done," he says. He sensed that people considered him not only inexperienced, but immature.

His Vidalia, La.-based company, Southern Designs, did get work creating shirts for school sports teams. With momentum building, he left college after six weeks to concentrate on the business. He began to diversify his products, and transformed the company, now a decade old, into a maker of home decor including metal signs.

Although many parents support their entrepreneurial children, they can also be pessimists. Ryan Neman discovered that at age 19, when he and Skyler Lucci started HeyTutor, an online company that matches tutors with students.

"I got a lot of backlash from family and friends," says Neman, whose business is based in Los Angeles. But he says, "I used the doubtfulness of other people to build a fire and prove them wrong."

Neman's father answered questions and gave advice, even as he told his son to focus on school. But Neman dropped out of the University of California, Los Angeles in his third year.

Neman was younger than many tutors he hired. "It's hard to interview someone who looks significantly older than you," he says. And clients who were parents would ask, "How much trust can I offer you if you're so young?"

Five years later, having had success, he finds more acceptance.

Young entrepreneurs are ideal for coming up with products and services aimed at people in their 20s and 30s because they understand the market and how to use social media to reach customers, says Lakshmi Balachandra, an entrepreneurship professor at Babson. But she sees some students struggling when an older person offers a suggestion.

"They don't necessarily want to hear advice or feedback, and that's part of the challenges they face," she says.

They can also ignore some important aspects of running a company. Taylor Toce started Velo IT Group, a technology services company, in 2006 at the age of 17. Toce says he was brave but ignorant; he was surprised by a lawsuit brought by a former staffer.

"You're not thinking about legal matters and insurance and human resources -- you're thinking about producing income and helping clients," Toce says. He settled the case, which helped him realize that his Dallas-based company needed an employee handbook that spelled out its policies.

Carl Dorvil was 20 and at Southern Methodist University when he started a tutoring service, Group Excellence.

"I didn't know what I didn't know," says Dorvil, who recalls donating tablet computers to a school district, hoping that would lead to requests for tutors. Dorvil and district officials had a miscommunication about when the schools would start using the devices, and Group Excellence was left without the income it expected. An investor in the company gave Dorvil a loan.

Dorvil, now 34, has lived a young entrepreneur's dream: He sold his first company, started another, GEX Management, and took it public in 2016. He's glad he didn't think too much 14 years ago about the challenges ahead.

"If I knew how hard it was and all the risks out there when I started, I probably would never have started," he says.