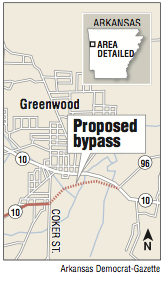 An updated study by the Arkansas Department of Transportation has flashed a green light for Greenwood officials to get serious about developing a bypass around downtown to improve safety and relieve traffic congestion.

A bypass south of downtown Greenwood has been in the city's master street plan since at least 1996. The Highway Commission issued a minute order at its meeting last week adopting the study "a planning guide for future improvement of the area."

"The citizens have been talking about this and asking for this for several years," Mayor Doug Kinslow said.

Kinslow said he sees the commission's action as a validation of the plan to disperse traffic congestion around the south end of downtown and as a signal to officials to begin working out the details of making the project a reality.

For example, he said community leader James Burgess has agreed to sell the necessary land south of downtown for the bypass to the city at a low price, but no papers have been signed because the route had not been approved.

With the commission's adoption of the study, Kinslow said Friday he believes the city can go ahead with purchasing the land.

He also said he plans to convene meetings soon to discuss the bypass plan and begin working out such things as financing the construction of the bypass, which the study says is estimated to cost $26.3 million, and consolidating support in the community for the project.

The study said no state funding has been identified for any improvements in the study, but Arkansas Department of Transportation public information officer Danny Straessle said the department would be more apt to consider backing a project if the community was able to help with the cost.

"We love when communities come to us and want to put a deal together," Straessle said.

He pointed to Cabot, which wanted a new exit on U.S. 67. The project was a low priority to the transportation department until officials there offered to dedicate revenue from a sales tax to help with the cost. Straessle said the department agreed to partner with Cabot on the project.

Communities could agree to partially finance a project cost, Straessle said, reduce some of the cost by accepting stretches of state highways into their local street systems, and apply for government grants.

Kinslow said officials have discussed asking voters to modify the city's 0.75 percent sales tax, which generates about $900,000 a year, to use all or a part of it for the bypass. The tax, in the second year of a 10-year term, currently is split three ways for the fire, police and road departments, he said.

The city could adopt the three miles of Arkansas 10 that runs through Greenwood into its city street system. It also could apply for state and federal grants for whatever money would be available.

The alternative approved by the Highway Commission calls for a new four-lane road to be built from Arkansas 96 on the east end of downtown southwest over Vache Grasse and Adamson creeks and across the undeveloped Burgess property and connect with Arkansas 10 at Coker Street. From that point westward to U.S. 71, two-lane Arkansas 10 would be widened to four lanes.

The study also adds the option of extending Main Street from the town square south to connect to the bypass. Kinslow said the extension always had been intended but it was never completed because the area south of downtown has never been developed.

The study included a traffic count that showed 17,000 vehicles pass through the heart of downtown on Arkansas 10 daily. It's common for traffic to be backed up a half-mile from the intersection of Arkansas 10 and Main Street in the morning and evening rush hours.

A bypass would reduce the number of vehicles going through downtown each day by 5,300, according to the study.

Kinslow said Arkansas 10 also is a main east-west route for trucks and the way through downtown is too narrow for wider trucks.

The study said 60 percent of Greenwood workers travel daily to Fort Smith, many of them on Arkansas 10 and the 10 Spur. More than 1,500 residents east of Adamson Creek -- including workers from as far away as Booneville -- travel through Greenwood to get to work in Fort Smith, Kinslow said.

"This suggests a large number of through traffic now travel on an urban facility (frequent access, numerous conflicts, low speed limits, etc.) that is not conducive to longer distance trips," the study said.

Arkansas 10 provides the only way into downtown from the east, the study said. If there were an accident or another problem that blocked or closed the street, emergency vehicles could not get to the east side of town and commuters would be cut off.

The study identified some environmental constraints to the proposed bypass route such as the Pink Bud Nursing Home, which is located near where the bypass would meet Arkansas 10 at Coker Street, and wetlands on the Burgess property that lie in the path of the bypass route.

The study also recommended avoiding or minimizing damage to Heartsill and Adamson creeks as well as to Coal Miners Park and to a structure that is eligible for inclusion on the National Register of Historic Places.