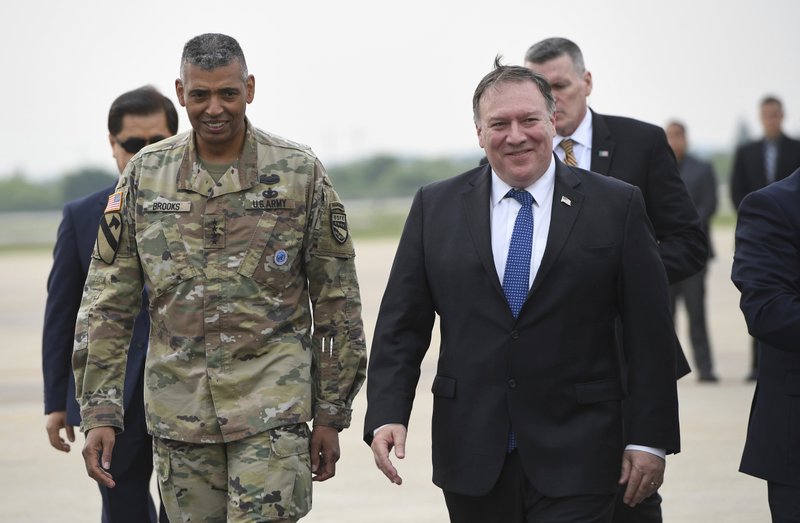 BEIJING — The United States will not ease sanctions against North Korea until it denuclearizes, Secretary of State Mike Pompeo said Thursday, as he reassured key Asian allies that President Donald Trump had not backed down on Pyongyang's weapons program.

Pompeo, meeting in Seoul with top South Korean and Japanese diplomats came after Trump's summit with North Korean leader Kim Jong Un and the president's comments fueled unease in Washington, Tokyo and Seoul. He said Trump's claim that the North's nuclear threat was over was issued with "eyes wide open" and brushed off a North Korean state media report suggesting Trump would grant concessions even before the North fully rids itself of nuclear weapons.

"We're going to get denuclearization," Pompeo said in the South Korean capital. "Only then will there be relief from the sanctions."

Harry Harris, Trump's choice to become ambassador to South Korea, said the U.S. must continue to worry about the nuclear threat from North Korea.

However, Harris, the former commander of U.S. forces in the Pacific, endorsed Trump's plan to pause major military exercises with the South, saying the U.S. is in a "dramatically different place" from where it was a year ago.

Pompeo emphasized that the drills, which North Korea claims to be preparation for a northward invasion, could still be resumed if the mercurial Kim stops negotiating in good faith.

The words of reassurance from Pompeo came after Tuesday's summit in Singapore, the first between a sitting American president and North Korea's leader in six decades of hostility. In the village of Panmunjom along the North-South border, the rival Koreas on Thursday held their first high-level military talks since 2007, focused on reducing tensions across their heavily fortified border.

Pompeo flew from Seoul to China's capital, Beijing, later Thursday for a meeting with President Xi Jinping, whose country is believed to wield considerable influence with North Korea as its chief ally and economic lifeline.

"I also want to thank China and President Xi for his role in helping bring North Korea to the negotiating table," Pompeo told reporters.

Pompeo thanked Beijing for its continuing efforts to help achieve the "complete, verifiable and irreversible denuclearization of North Korea." He said both sides had agreed that sanctions would not be eased until that's achieved.

Chinese Foreign Minister Wang Yi described the Singapore summit as having "great historic significance" with the potential to lead to "enduring peace." Wang said the U.S. should continue to "work through China."

Pompeo said there was still a risk that denuclearization might not be achieved and there was more work to be done by Beijing and Washington.

"We believe that the sanctions themselves are not the end," Geng said.

China has been praised by Trump for ramping up economic pressure on the North, which the U.S. believes helped coax Kim to the negotiating table.

For its part, Beijing has welcomed Trump's diplomacy with Kim. The summit in Singapore marked a reduction in tensions — a sea change from last fall, when North Korea was conducting nuclear and missile tests, and Trump and Kim were trading threats and insults that stoked fears of war.