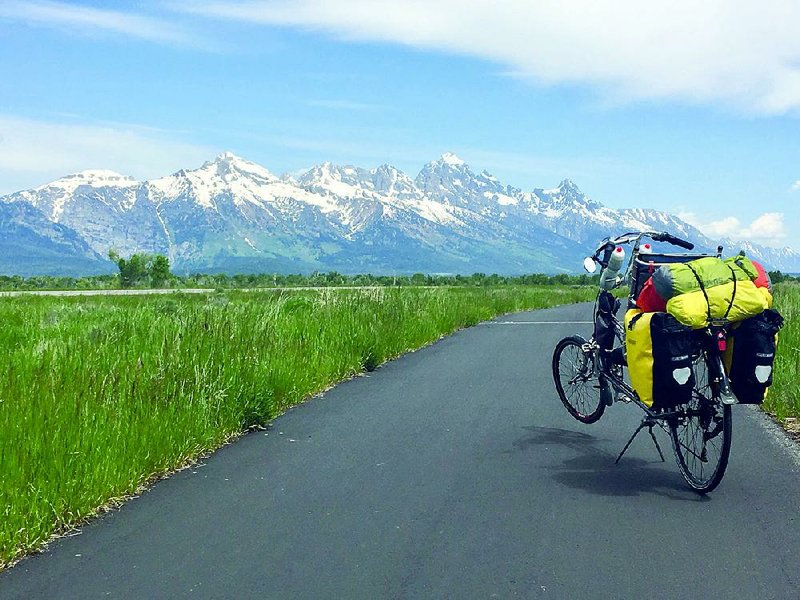 With Wyoming’s Grand Tetons and a lot of climbing ahead, Finley Cranor was confident June 7 that the load on his long recumbent bicycle — less than 35 pounds of camping gear — won’t overwhelm him.

For the last year I've done my best to ride my bike to work. Sure, it's hot in the summer, which means sweat-stained armpits and damp clothing. In the winter, it's so cold my fingers go numb.

But it's worth it.

Here's why: There's something peaceful about the ride. A different perspective is afforded the man who pedals a bike. There's work involved; you are your own engine. The miles take their toll, but in each revolution of the chain, the tire, there is the completion of a perfect cycle.

A bike is an extremely efficient way to travel. It's faster than walking, less costly than an automobile, and then there's the view -- the world ridden past at 10 miles per hour. The horizon and the road are your only boundaries. There are no windows on a bicycle, just the sky.

When I get to work (I teach school), I don't have to go straight for the coffee. I'm wide-awake, my heart already pounding out a steady rhythm in my chest. The ride releases endorphins. Endorphins are the "feel-good" chemicals in your brain. My whole body senses it. I'm sure my students can feel it too.

Another great advantage of biking to work is, of course, the cardio. A morning workout does well to boost your metabolism throughout the rest of the day. In other words, ride your bike to work, then splurge at lunch without the guilt. Just don't splurge every day.

The focus-boost, the mindfulness, and all the health benefits of an early morning bicycle ride should be evident by now, but I'd like to offer one final plus: Your bike might take you places you never imagined. It might take you all the way across the country.

Such is the case for my dad, Finley Cranor. As you read this, Dad is most likely somewhere in Montana, pedaling his way across the Rocky Mountains, one turn of the wheel at a time. This is his third year to ride the TransAmericaBicycle Trail, or TransAm for short. Instead of doing the entire length in 75 to 90 days, he's tackled it in thirds over three years. When he completes this final leg, he'll have ridden all the way across the country.

Dad has always been a fitness nut. Jogging was the focus for a while. In 1990, he and Mom competed in the Boston Marathon. But then Mom's knees went bad, leading to replacements, and all the miles began to add up. Thus, their jogging days were over, which led Dad to the TransAm.

A lot of people don't get a cross-country bike trip.

"Your dad's doing what?"

The answer to that last question is no, by the way. And it's a good metaphor for my father's journey. Folks just don't understand it.

There aren't many people who take to the road for 40 days, only to pedal, then pedal some more, averaging around 80 miles per day. But my dad did. He's doing it. And when he makes it to the Pacific Ocean, when he dips his tire in that salty water -- he'll have completed a journey the likes of which most could only dream.

And I'd bet, if you were to ask him, how he did such a thing, how he made it from home in Dover to the East Coast, then the West, and back again, his answer would be simple. It'd be kind of like riding your bike to work, a small decision made every day.

If Dad hadn't kept his physical fitness up over all the years, this trip would have never been possible. But he did. He took the time to rise early every morning, head out for a run, ride his bike up through the Ozark Mountains, and now, at age 65, he's still reaping the benefits.

If you want to follow my father along his journey, he keeps a daily blog. Find that online at arkansasonline.com/618bike. It will be worth your time. In the first week alone he traversed the Tetons, came face to face with bison and bear, and met people from as far away as Beijing.

I would charge you not to just "follow" him, but instead join him. Find a bike, air up the tires, and hit the road. You don't have to pedal across the country, but a nice little ride to work could take you a long way.

Eli Cranor writes from Russellville. He was awarded the Robert Watson Literary Award in 2017 and is at work on a novel. He can be reached at elicranor.com.

Print Headline: Biking to work is like Dad's big ride