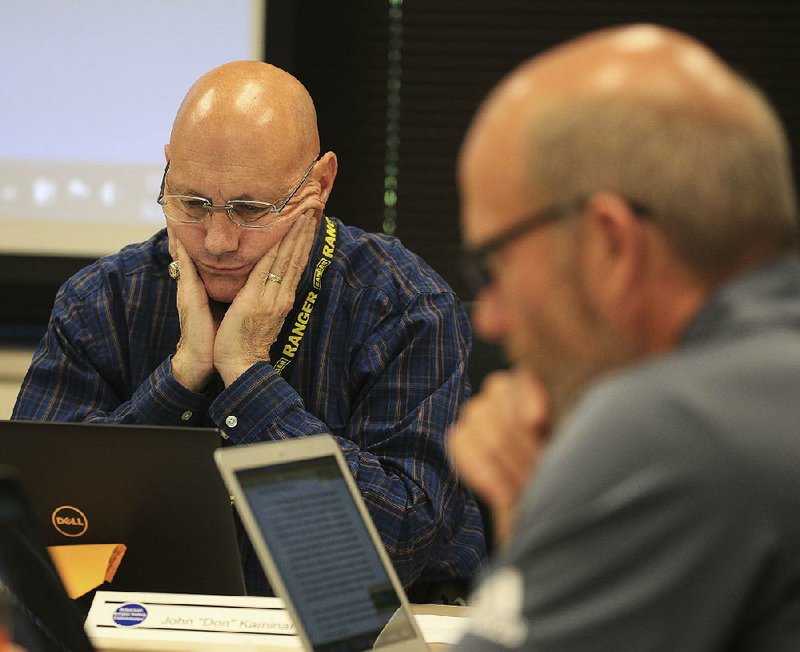 John “Don” Kaminar (left) and John Allison of the Arkansas School Safety Commission read through the panel’s preliminary report during a meeting Thursday in Little Rock.

The Arkansas School Safety Commission wrapped up the first stage of its work Thursday, producing a preliminary report that calls in part for every school campus to have some form of armed security when children and staff members are present.

While the commission members called armed security "a best practice" for a school, they also concluded that decisions on using armed security -- currently allowed by state law -- are to be made on the local school district level.

The preliminary report is due to the governor by Sunday.

The contents of the report will be considered preliminary until the information can be more fully discussed, researched, expanded or parts even deleted by the commission in its final report that is due to the governor Nov. 30.

"These are not our final recommendations," Cheryl May, director of the University of Arkansas' Criminal Justice Institute and chairman of the Arkansas School Safety Commission, said Thursday as the gubernatorial-appointed commission tweaked a draft of its report, paragraph by paragraph.

"The work will continue," May said during a morning session that attracted more than a dozen onlookers including Sen. Joyce Elliott, D-Little Rock, and participants in the Moms Demand Action for Gun Sense in America organization.

Hutchinson established the 18-member group of educators, law enforcement agents and mental-health professionals in March to make recommendations on improving school security. He did that in the aftermath of the Feb. 14 shooting deaths of 17 students and employees by an intruder at a Parkland, Fla., high school.

Since then, 10 people were killed at a Santa Fe, Texas, high school and two more were shot at a Noblesville, Ind., middle school. In each of those cases the shootings reportedly were carried out by current or former students in those schools.

In all, 35 people died in school shootings in the United States in the just ended 2017-18 school year, according to Education Week, a national weekly newspaper on elementary and secondary education.

The Arkansas School Safety Commission draft report's provision stating that "No campus should ever be without armed security when staff and children are present" generated the most discussion at the commission's Thursday meeting.

"That's problematic the way it is written," John "Don" Kaminar, security and loss prevention manager at the Arkansas Department of Education and a commission member, said. "Arkansas is a local control state and I don't think we can tell local education agencies 'You should have armed security when staff and students are present.'

"I think we could say that local education agencies should have the means or resources to have armed security if they think it is necessary," Kaminar said.

Kaminar said the term "campus" is vague, as some campuses contain more than one school. He also wondered if the provision would make armed security necessary in the case of a small group of students and a teacher who are working on a project after regular school hours.

John Allison, a Vilonia High School teacher and commission member, said the commission can't mandate armed security but can say that it is a best practice for protecting students in the event of an attacker on a campus.

"There are lots of different ways to have an armed presence on a school district campus," said Jami Cook, director of the Arkansas Law Enforcement Training Academy, listing the possible use of school resource officers who are police officers; the use of retired law enforcement officers as auxiliary officers; and/or the use of commissioned school security officers who are school district teachers and others who volunteer to be armed and are trained to defend the school in the event of a shooter.

Cook said a school could use just one type of security officer or a combination of different kinds of armed officers.

"However it looks, ideally, we would have someone take on that role," Cook said.

Commission member Brad Montgomery, director of the state's Public School Academic Facilities and Transportation Division, speculated that the "No campus should ever be without armed security" phrase could end up requiring state funding to the districts for such security. He also predicted that many districts will not likely agree to any such mandate and will look for other approaches for school security.

David Hopkins, Clarksville School District superintendent and a commission member, is a proponent of the commission's proposal that every campus needs an armed presence, although he said there doesn't need to be a law that mandates it or eliminates local control on the topic. He also said funding needs to be provided.

The Clarksville district has become a model in the state for the use of commissioned school security officers along with school resource officers.

Ultimately, the commission agreed Thursday to add a sentence to the report that states, "Whether to provide armed security, and decisions on which strategies to employ, are clearly local decisions for school administrators, school boards, parents, teachers and the community, and should be made after careful consideration of many factors, including financial constraints."

The report states that the commission will work with the Department of Education's Safe Schools Committee to develop a model memorandum of understanding for school district use.

The commission also recommends that all districts be required to form district safety and security teams and that there be a school safety coordinator for each school. Schools are already required to conduct safety assessments, which the commission said should be conducted every three years.

The commission committed in this preliminary report to evaluate a change in the way students and faculty members respond to fire alarms as a way to reduce the risk of gunmen using the alarms to trigger an evacuation.

The mental health and prevention section of the preliminary report refers extensively to the newly released results of a Centers for Disease Control and Prevention youth survey that indicates that Arkansas has some of the highest rates in the nation of bullying and fighting at school, sexual violence, feelings of hopelessness, suicidal thoughts and plans, prescription and illegal-drug abuse, and other high risk behaviors.

The commission recommended that schools establish a behavioral threat assessment team and a process for dealing with the different types of school-violence threats.

Other components of the commission's preliminary report address the development of communication systems in the event of school emergencies -- including systems for promoting anonymous reporting of suspicious behavior and training on how to recognize and report at-risk behavior and threats.

The commission has referred measures to enhance the security of existing and newly constructed campuses to a state advisory council on academic facilities to do further research. That information would be considered for inclusion in the commission's final report in November.