February was wettest in Arkansas since at least 1939; lightning kills 25 cattle near Lonsdale 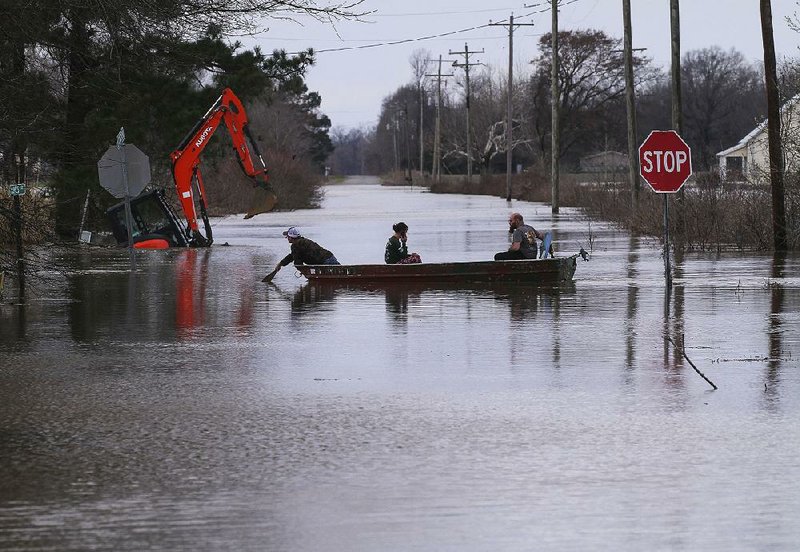 People travel along Arkansas 381 at Staton and Daniels roads near Carlisle to see their home, which burned down Wednesday night after they were evacuated as the water rose.

Mount Ida in Montgomery County had the most rain in Arkansas last month with 16.09 inches, breaking its previous February record of 10.88 inches set in 1894, according to the weather service. Some unofficial stations reported as much as 18 inches.

About 50 miles east* of Mount Ida, near Lonsdale, 14 cows and 11 calves were killed when lightning hit an oak tree early Thursday and scorched 100 yards of barbed-wire fence along the Garland and Saline county line.

"They were trying to get away from that heavy rain," Mike Rigsby said of his cattle. "It didn't look like any of them moved a bit. They fell over on the fence, actually, tore the fence down."

Rigsby said the lightning melted the wire, which he found in burned, wadded piles.

"We've been farming for 65 years, and this is the first time I've ever seen anything like this," he said. "It was five or six times louder than normal lightning. It woke me up. I thought, 'Whatever it hit, it hit hard.'"

The storms moved out of Arkansas on Thursday, leaving swollen lakes and rivers in their wake.

Fifty-five locations in Arkansas reported record rainfall for February, according to the National Weather Service, which has more than 100 rainfall monitoring stations in the state. The results are preliminary until they receive final approval by the National Center for Environmental Information in Asheville, N.C.

Mena Intermountain Municipal Airport reported 18.04 inches of rain for February, but the weather service didn't include that number in the official top-55 list.

Fred Ogden, the airport manager, said the difference could be because the airport has a unique weather station.

Either way, it's been wet at the airport.

"Man, it's been a frog strangler, I'll tell you what," Ogden said. "It's surprising everything hasn't sunk into the mud here."

Monticello was second on the list with February rainfall of 15.85 inches, breaking the record of 12.85 inches set in 2001.

It was the wettest winter in Arkansas since 1949-50, according to the weather service. Sparkman in Dallas County led the state in winter 2017-18 rainfall with 27.08 inches.

Childress said the rain was good for Lake Ouachita, which was low before the deluge.

"Our lake is full again," she said. "Thank goodness. It was so far down."

On Feb. 13, the U.S. Army Corps of Engineers was warning of low water levels on Lake Ouachita, which was at 568.07 feet above mean sea level. At noon Thursday, the lake level was at 583.13 feet, said Derick Walker, supervisory ranger at Lake Ouachita.

"It's definitely one of the faster rises we've ever had," he said.

The conservation pool, or peak water storage level, at Lake Ouachita is 578 feet. Anything above that is flood stage, said Walker.

March 1 is the day campsites normally open at Lake Ouachita after being closed for the winter, but Walker said about 75 of the lake's 700 campsites remained closed Thursday because of flooding.

Walker said logs and other debris have washed into the lake, "so boaters need to be aware that there are hazards out there floating."

Miles Brown, a spokesman for the Corps of Engineers in Little Rock, said almost all of the Corps' 12 lakes were experiencing flooding.

"All of our lakes are above conservation pool now, except for Norfork," he said. "It's slightly below."

"We're working to bring those levels back down by releasing water as channel capacity allows," he said.

Brown said there was an extremely dry period in December and January, and many of the state's lakes were at 75 percent to 80 percent of their conservation pool.

Brown said the lakes are doing what they were designed to do.

"They're holding back these waters," he said. "Their job is to reduce peak flooding downstream."

In Baxter County, Eldon E. Cooper, 49, was rescued Wednesday night after the tractor he was driving slid off the muddy edge of a levee and into a pond north of Mountain Home, trapping him inside.

Cooper spoke to his wife by telephone about 5:10 p.m. Wednesday, according to a news release from the Baxter County sheriff's office. When Cooper didn't meet his wife at church at 6 p.m., she went looking for him and found the tractor on its side in the pond.

"There had been a whole lot of rain here recently," Lewis said. "It was just soft ground and the tractor slid."

Initially, first responders didn't believe Cooper had survived, Lewis said. About 8:30 p.m., sounds were heard coming from inside the tractor, according to the news release. Rescue personnel broke glass in the cab to get Cooper out, Lewis said.

"He was able to keep his head above water to survive," Lewis said. "They said he had ahold of a seat-belt strap that he was using to hold himself above the water. Holding on for dear life."

*CORRECTION: A previous version of this story misstated the location of Lonsdale.

Print Headline: February a record-breaker for rain; Month wettest in state since at least 1939; lightning kills 25 cattle near Lonsdale