'In God we trust' signs going up in schools 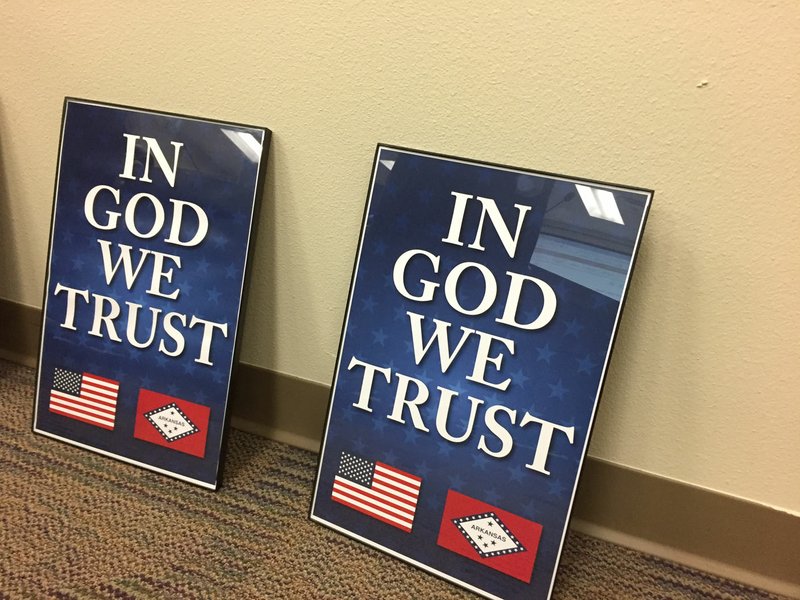 Northwest Arkansas Democrat-Gazette/DAVE PEROZEK Two of the framed "In God we trust" posters presented to Bentonville School Board members at their Feb. 19 meeting are seen here. State Rep. Jim Dotson, R-Bentonville, and Ray Brust, a representative of American Legion Post 77, presented the posters to the board. They said nearly 900 more are being donated to Bentonville schools for display in classrooms and libraries.

Hundreds of posters proclaiming the national motto "In God we trust" have been distributed and soon will be on display in some of Northwest Arkansas' public schools.

Act 911 of last year's legislative session requires the state's public schools to display durable posters featuring the motto, as well as the U.S. and Arkansas state flags, if the posters are donated. They may be displayed in each public elementary and secondary school classroom and library or any public building in Arkansas maintained or operated using state money.

Legislation similar to Arkansas’ Act 911 has been introduced and is making progress in two states.

• In Florida, a bill requiring “In God we trust” be displayed “in a conspicuous place” in every school and administrative building passed the House of Representatives last month by a 97-10 vote. The Senate has not yet considered the measure.

*In Oklahoma, state Sen. Wayne Shaw’s bill requires posters featuring “In God we trust” as well as the U.S. and Oklahoma state flags be displayed in public-school classrooms and libraries, as well as any other public building maintained or operated with state money. The posters must be donated to the schools. A Senate committee passed the bill by a 6-4 vote Feb. 19 and the Senate Appropriations Committee approved it by a 33-4 vote Thursday.

The posters for Bentonville, along with 222 for the Pea Ridge School District, were donated by the American History and Heritage Foundation, an Arkansas-based group led by state Sen. Jason Rapert, R-Conway. American Legion Post 77 of Bentonville raised about $1,500 for the frames, for which Hobby Lobby gave a discount, Dotson said.

Ray Brust, an American Legion member, expressed gratitude to those who contributed money for the frames.

"I and everybody that I know is very positive on this law," Brust said. "I think it's something that will help not only the atmosphere, but it's something we do need for our youth. I think everyone knows our youth are lacking in certain areas of information about the United States and what we stand for."

Leslee Wright, communications director for Bentonville Schools, said the district facilities department's goal is to have all posters up by spring break, which is in two weeks.

Posters also are being donated to schools in Gravette, Gentry and Siloam Springs, Dotson said.

Rogers School District administrators said they weren't aware of any posters being donated. Dotson, however, said he dropped off 100 posters for a Republican club at Rogers High School a couple of months ago, and the Republican Party of Benton County purchased frames for those posters.

Communications directors for Springdale and Fayetteville school districts said they weren't aware of any posters donated to their districts.

Not everyone likes the law.

American Atheists, a New Jersey-based organization dedicated to the separation of church and state, sent letters in September to Arkansas school superintendents urging them to reject the posters, suggesting displaying them would violate the establishment clause of the First Amendment.

The letter said parents from across Arkansas who were willing to file suit "to protect the constitutional rights of their children" had contacted the American Atheists Legal Center.

The Freedom From Religion Foundation, based in Madison, Wis., also has objected to Act 911 and said it would fight it.

"The purpose behind the law is clear: to use the machinery of the state to promote Christianity," the foundation stated in a news release last week.

Casey Goodman expressed his displeasure at a Bentonville School Board meeting. He said he's an Air Force veteran and his spouse works in the school district.

"You know more than half your teachers don't want that there," Goodman said.

Goodman suggested the money for the posters would be better spent for food or mental-health treatment for homeless veterans.

Dotson said people have the right to contribute money to any cause or project and reiterated tax dollars did not pay for the posters. The "vast majority" of teachers he's heard from support the poster project, Dotson said.

Dotson is running for re-election to his District 93 House seat this year. Gan Nunnally, a Bentonville businessman, is running against him in the Republican primary election, to be held May 22. Gayatri Agnew is running for the seat as a Democrat.

Dotson, when asked why he pursued the law, said he believes history and heritage are important. Many people, especially children, are not aware "In God we trust" is the national motto, he said.

"So putting it up and displaying it is something I think is very valuable," Dotson said.

The motto can be traced back to the Civil War, according to information provided on the U.S. Department of the Treasury's website.

Salmon P. Chase, the Treasury secretary, received a letter in November 1861 from a Pennsylvania minister, who requested "recognition of the Almighty God in some form on our coins."

Chase wrote to the director of the mint in Philadelphia instructing him to prepare a motto to be included on coins that expressed the trust Americans have in God. Chase suggested "In God we trust," which first appeared on the 1864 2-cent coin, according to the Treasury Department.

A law passed by Congress and signed by President Dwight Eisenhower in 1956 declared "In God we trust" the national motto of the United States. The first paper currency bearing the motto entered circulation on Oct. 1, 1957. All U.S. coins have included the motto since 1938, according to the Treasury department.

Print Headline: 'In God we trust' signs going up in schools