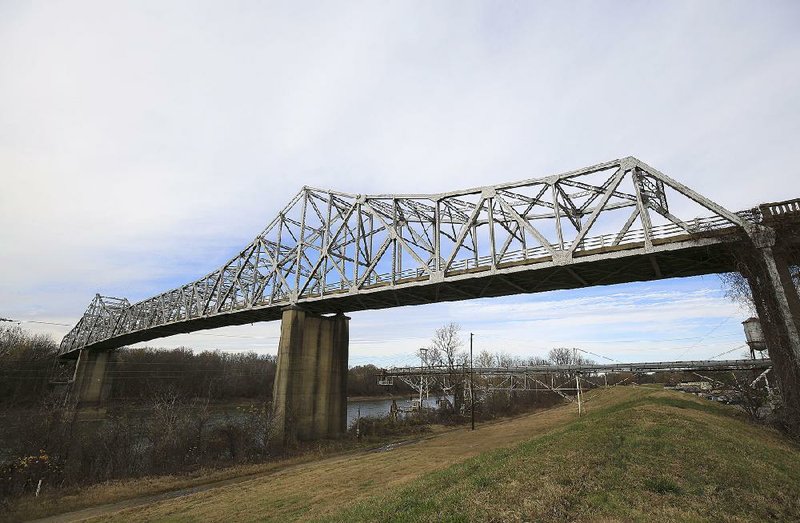 Arkansas Democrat-Gazette/STATON BREIDENTHAL --12/7/17-- A group in Clarendon is trying to convert the old U.S. Highway 79 bridge into a bicycling and walking trail.

Fans of the old White River bridge in Clarendon who sued to save the 87-year-old span from destruction have 90 days to find a way to save it, Pulaski County Circuit Judge Chris Piazza ruled Tuesday.

In three months, Piazza said, he will dismiss their lawsuit if they can't work out a deal to keep the bridge intact. Dismissal will allow contractors to begin tearing down the bridge so the site can revert to its natural state, as required by federal regulators.

The old bridge and its replacement are both in the wildlife sanctuaries on the White and Cache rivers that are overseen by the U.S. Fish and Wildlife Service.

"I know it's not what anybody wants," the judge said of his ruling.

[360-DEGREE PHOTO: Check out the Clarendon bridge from all angles]

The Arkansas Highway Commission and the Arkansas Department of Transportation wanted the lawsuit dismissed so contractors can start right away tearing down the historic Clarendon bridge.

Bridge supporters wanted the judge to block demolition at least until a trial could be held on the merits of their lawsuit. One of their lawyers, John Gill, told Piazza that a demolition crew was actually on the span during Tuesday's hearing to survey it for destruction.

State lawyers told the judge that the group has no legal basis for a lawsuit. Attorney Monty Baugh with the Arkansas attorney general's office, representing the Highway Commission and Transportation Department, said sovereign immunity protects state government from lawsuits like this one where state officials have done nothing illegal.

Also, Baugh said, the plaintiffs missed earlier opportunities to challenge the plan to replace the old bridge, and now they're barred from intervening by the statute of limitations.

The Monroe County plaintiffs' emotional attachment to the old bridge does not give them any legal right to intervene in a perfectly legal arrangement between federal and state authorities that requires that the old bridge be demolished, he told the judge.

"The taxpayers got a new bridge out of this deal, and part of the deal is that we ... turn it back into wetlands," Baugh said. "I hope it's not going to wipe them out [economically]. If that's true, they're hanging by a thread anyway."

Demolishing what's left of the old bridge is the final step in an 18-year process to replace the span on U.S. 79 with a safer structure and to have the original site return to its natural state, Baugh said. He warned that federal authorities might want a refund of their multimillion dollars for the new span, if the state doesn't live up to its agreement to raze the old bridge.

The plaintiffs, a group of Monroe County taxpayers united to save the structure, describe the bridge as "a symbol of American strength, craftsmanship and freedom of expression. It is an engineering marvel and a core part of Arkansas history that ... [sits] near the original road from Memphis to Little Rock [and] on the route of the historic Trail of Tears."

The original bridge was rooted in Clarendon, but its replacement now diverts drivers past the Monroe County seat, plaintiffs' lawyer Robert Jackson told the judge.

Losing the old bridge, with its economic potential, would be the death blow for the White River city at the mouth of the Cache River, Jackson said.

"This is really not about a bridge," Jackson told the judge.