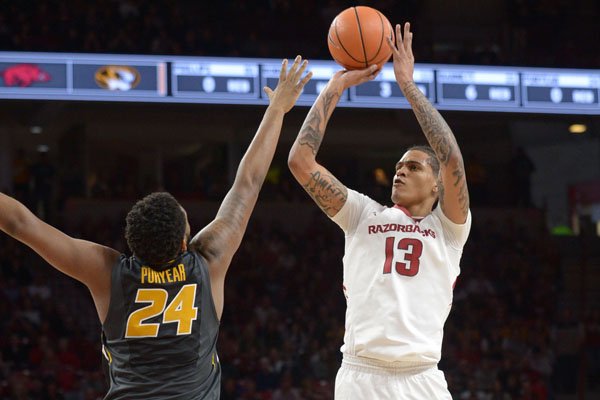 Arkansas forward Dustin Thomas shoots over the top of Missouri forward Kevin Puryear during a game Saturday, Jan. 13, 2018, in Fayetteville.

Thomas' dismissal was for an unspecified violation of team rules, Anderson said.

"It is a privilege to represent the University of Arkansas as a student-athlete," Anderson said in a statement announcing the decision. "We will continue to hold the student-athletes in our program to a high standard on and off the court.”

Thomas started in 17 games this season and averaged 5.0 points and 4.1 rebounds in 26 appearances.

He was suspended from competition in the preseason and for the first three games of the 2017-18 season for an unspecified rules violation. He dressed but did not play in the Razorbacks' home games against Ole Miss and South Carolina. Anderson clarified it was a coach's decision not to play Thomas in both games.

Thomas, a Texarkana, Texas, native, transferred to Arkansas in 2015 after playing two seasons at Colorado. He was arrested with teammates Anton Beard and Jacorey Williams in the summer of 2015 after being accused of passing counterfeit money at multiple Fayetteville businesses, according to a police report. For his role, Thomas was suspended from team activities for a portion of his subsequent redshirt season.

Thomas averaged 5.3 points and 3.8 rebounds as a junior in his first season of eligibility at Arkansas. He played a career-high 31 minutes and scored 13 points in a win over Seton Hall last March in the first round of the NCAA Tournament.

Thomas' dismissal comes three days before the Razorbacks are set to begin postseason play at the SEC Tournament in St. Louis. Arkansas also is expected to receive a bid to the NCAA Tournament, which begins next week.