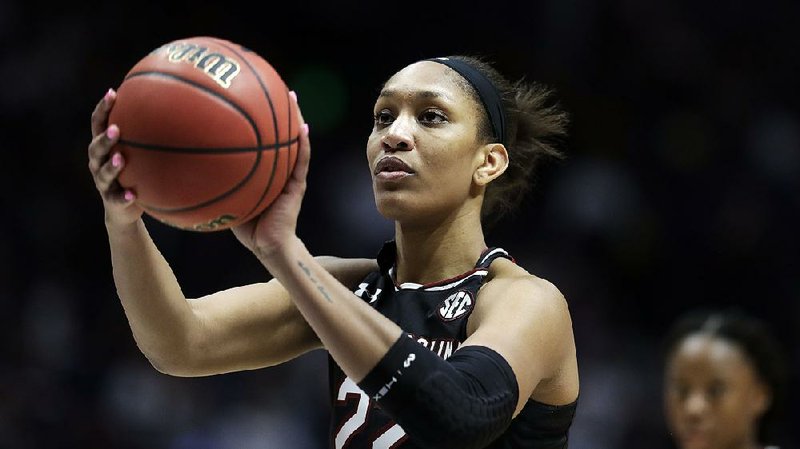 Doing something nobody has ever done before deserves a mighty celebration.

And Wilson was on the court for each tournament victory in an unprecedented run in the SEC. Tennessee with its 17 tournament titles won three in a row twice, the last between 2010 and 2012, but the Lady Vols never made the final with a chance at a four-peat.

"It's a blessing and an honor," said Wilson with a net around her neck. "The SEC is a great conference and to make history like that, to be a team that's gone four times in a row to the championship and won it, it's a great feeling. I really can't even put into words the feeling I know I have ... so this has been a great tournament."

Mississippi State (32-1) had not lost since that national title game, coming into the SEC Tournament final with the Bulldogs' first regular-season championship and hoping a third try at the tournament title would be the charm.

The SEC's best three-point shooters struggled outside the arc, and the Bulldogs couldn't overcome South Carolina's dominance in the paint with Teaira McCowan limited by foul trouble most of the first half. The Gamecocks held Mississippi State to its fewest points all season.

"Just wasn't our day offensively," Mississippi State Coach Vic Schaefer said. "And it just was really frustrating from an offensive standpoint because it didn't matter what string we pulled, it just didn't work."

Victoria Vivians led Mississippi State with 17 points, and Morgan William had 10. McCowan, who came in averaging 18.1 points per game, was limited to six points.

"Our kids were engaged and locked into the game plan," South Carolina Coach Dawn Staley said. "They did not want to lose. I think they wanted to create their own history, which was to win four SEC Tournament championships. And they were determined to do it."

UNCASVILLE, Conn. -- Katie Lou Samuelson scored 21 points to lead No. 1 Connecticut to a rout of Tulane in the quarterfinals of the American Athletic Conference Tournament.

Napheesa Collier added 19 points and Azura Stevens chipped in with 15 points and 9 rebounds for Connecticut (30-0), which has won 30 games for the 13th consecutive season and 23rd overall.

Kolby Morgan had 21 points to lead Tulane, which finishes its season at 14-17.

Lauren Cox had 19 points and 11 rebounds, and Alexis Morris scored a season-high 18 points for Baylor. Jordan Moore and Amy Okonkwo each scored 12 points for TCU.

Arica Carter finished with 16 points and hit four three-pointers, Fuehring and Myisha Hines-Allen each finished with 15, and Durr -- the ACC Player of the Year -- hit four free throws in the final seconds to help the top-seeded Cardinals win their first conference tournament since 1993.

Jessica Shepard had 23 points and 10 rebounds, and Arike Ogunbowale added 20 points for the second-seeded Fighting Irish (29-3), who failed to win the ACC Tournament for the first time since joining the league. They had won the previous four years.

Ariel Atkins, Joyner Holmes and Alecia Sutton each scored 10 points for the Longhorns, who have won 12 of 13. Texas will play No. 3 Baylor for the title Monday night.

Maryland ended the third quarter on a 12-2 scoring run and continued to climb back into the game early in the fourth. The Terrapins pulled within two points with about four minutes left to play in the game but the Buckeyes were too much for Maryland.

UNCASVILLE, Conn. -- Maria Jespersen scored 23 points to lead No. 20 South Florida (25-6) to a rout of East Carolina (16-15) in the quarterfinals of the American Athletic Conference Tournament.

Freshman Lashonda Monk had 11 points to lead East Carolina, which beat SMU in the tournament's opening round and finishes its season at 16-15.

ASHEVILLE, N.C. -- Three-time Southern Conference MVP Kahlia Lawrence added an NCAA Tournament berth to her resume, scoring 29 points and leading No. 25 Mercer (30-2) to a victory over East Tennessee State (20-11) in the championship game.

Alex Williams added 14 points and KeKe Calloway 11 for Mercer, whose only appearance in the NCAA Tournament was at the Division II level in 1985. 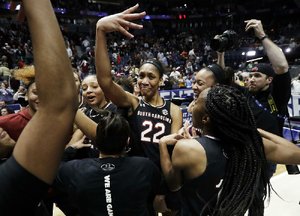