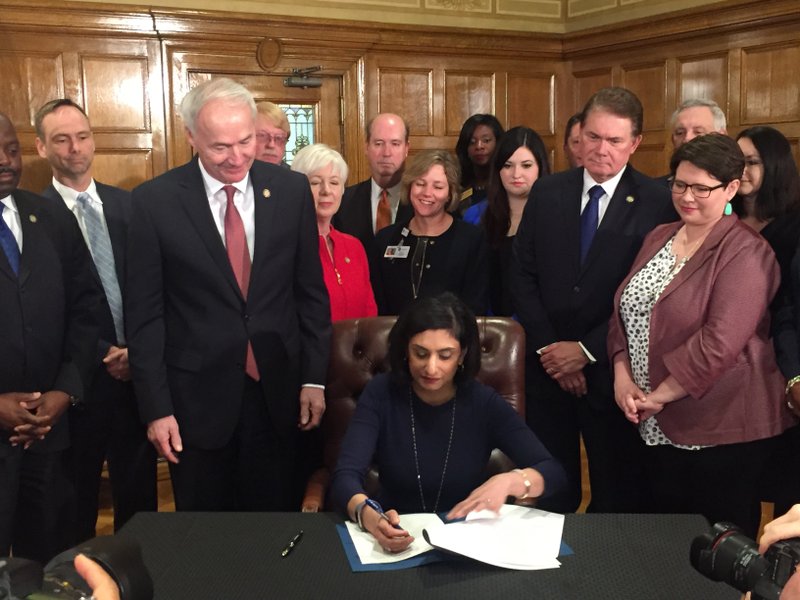 Seema Verma, administrator of the U.S. Centers for Medicare and Medicaid Services, signs a federal waiver allowing Arkansas to implement a work requirement on many of the recipients of the state’s private-option Medicaid expansion program on Monday, March 5, 2018.

Gov. Asa Hutchinson on Monday announced the approval of a federal waiver allowing Arkansas to implement a work requirement on many of the recipients of the state’s private-option Medicaid expansion program.

Arkansas has sought approval for such a waiver for around a year. The Trump administration in January said it would allow states to impose work requirements on Medicaid. It has already approved proposals from Kentucky and Indiana.

However, Hutchinson predicted the state would be the first to implement a work requirement because of the preparations done as the state sought approval from the federal government.

More than 285,000 people are on the Arkansas program, which was created as an alternative to expanding traditional Medicaid under the federal health law.

[NEW: Sign up for the Arkansas politics and legislative updates email newsletter]

The governor, who was joined by Centers for Medicare and Medicaid Services Administrator Seema Verma, noted Monday that the waiver does not include a reduction of “Medicaid coverage down to 100 percent of the federal poverty level.” That proposal would have moved 60,000 people off the program.

“The administrator has agreed to continue to work with us on that, but we did not want to wait for a full analysis of the entire waiver,” Hutchinson said.

He added that the work requirement waiver is “not about punishing anyone.”

“It’s about giving people the opportunity to work. It’s to give them training that they need. It’s to help them move out of poverty and up the economic ladder,” Hutchinson said.

The plan will affect about 39,000 non-disabled, childless adults on the plan who are 19 to 49 years old. They would be required to work or participate in other activities such as volunteering or vocational training for 20 hours a week.

Arkansas' proposal will not affect those on its traditional Medicaid program.

The work requirement's approval was seen as key to winning support for reauthorizing the Medicaid expansion by state lawmakers in Arkansas. The state budget bill for Medicaid and the expansion require three-fourths support in both chambers of the Legislature, and vacancies in the Arkansas Senate have left supporters shy of the votes they'll need.

"It certainly makes it more palatable," said Republican Sen. Alan Clark, an opponent of the expansion who said he was undecided on whether to support the budget measure. "Still overall I'm not a fan of the program, but I think they've made some huge improvements."

Hours after the work requirement was approved, the state's Joint Budget Committee endorsed the budget bill for Medicaid and the state's Medicaid expansion program. The bill now heads to the state Senate for a vote.

In an emailed statement, the six Republicans that make up Arkansas' congressional delegation praising the decision by the Centers for Medicare and Medicaid Services.

“Encouraging people who can work to find employment is a common-sense policy with a track record of success. It not only focuses Medicaid dollars on those who need it most; it also helps people get back into the workforce and move up the income ladder," they wrote.