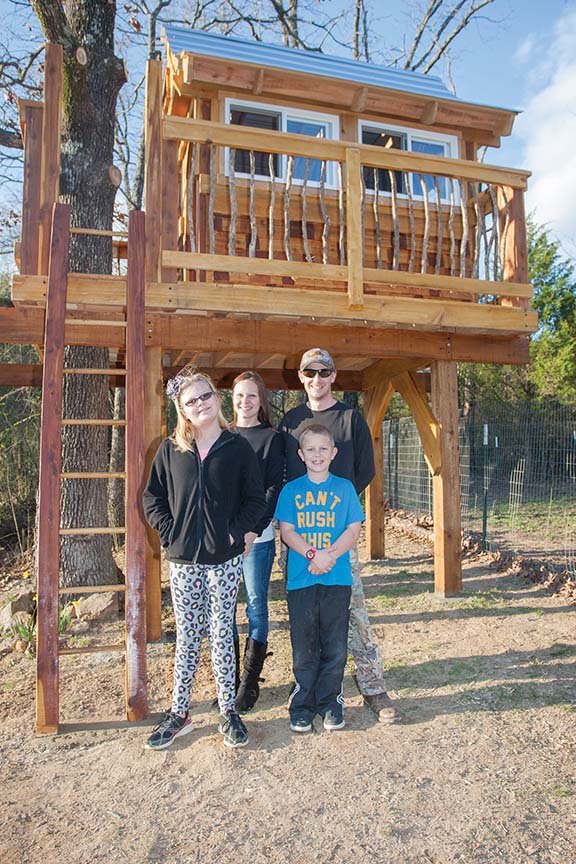 Allisa Carter, 11, of Searcy is a Make-A-Wish recipient of a treehouse. Carter, a Southwest Middle School student, has tuberous sclerosis complex, a rare genetic condition. Pictured are, front, from left, Alissa and her brother, Brandon, 8; and back, their parents, Ashley and Robert Carter. ( Mark Buffalo)

Alissa Carter fell in love with a fairy-themed treehouse she saw on television, and thanks to a group of Harding University student-athletes and the Make-A-Wish Foundation, she has one in her backyard.

Alissa, 11, is the daughter of Robert and Ashley Carter of Searcy, who also have an 8-year-old son, Brandon.

Alissa, a Southwest Middle School student, has tuberous sclerosis complex, a rare genetic condition. Symptoms include benign growths in the brain and on other vital organs such as the heart, kidneys, eyes, lungs and skin. The condition can also cause developmental delays and seizures.

Alissa, who will be 12 on March 21, had seizures immediately when she was born. She underwent brain surgery when she was 2 and is doing well, her parents said.

“Her brain surgery was amazing for her to come through, and to be where she’s at now is really amazing,” Ashley said. She said Alissa hasn’t had any “physical seizures” since the surgery.

The couple take Alissa yearly to a clinic in Cincinnati that specializes in the condition.

“Even though she’s delayed, I’m OK with that. I don’t look at it as a bad thing; it’s a blessing,” Ashley said.

She said it also was a blessing to get a call that Alissa had been selected by the Make-A-Wish Foundation, which grants wishes to children with life-threatening medical conditions.

“It was kind of awesome to find out she was getting her wish,” Ashley said.

Plans for the treehouse were revealed Feb. 25 in a surprise ceremony for Alissa at Harding University.

Robert said his daughter also received signed balls — from golf balls to a football — from athletes of every sport represented on campus, too.

An employee of Aramark, Robert manages Einstein Bros. Bagels at Harding University. He said that makes the fact that the wish originated with students, many of whom he knows, even more special.

Harding senior Jack Thomas of Little Rock, a baseball player and president of the Student Athletic Advisory Committee, a leadership group, spearheaded the effort. He said the NCAA Division II is a partner with the Make-A-Wish Foundation. The athletes raise $1,000 each year for the Great American Conference, “and that’s that,” he said.

“We wanted to do something that would touch home,” he said.

Thomas said he asked Make-A-Wish Mid-South of Arkansas what it would take to grant a wish for a child in the area. He was told $8,000, so the students got to work. The Athletic Committee held fundraisers, including a Week of Restaurants, where a percentage of proceeds from sales were donated to the advisory committee.

Alissa said she won a Bison coloring contest and thought that’s why she was invited to Harding University.

“The ladies at Harding came up with that,” Ashley said. “The coloring contest was to get her up there.”

Alissa was excited about that by itself.

“My grandma was there, my mom, my dad — my whole family,” Alissa said.

“We love watching that show. She’s always wanted a treehouse,” he said.

On a similar show, a person requested a treehouse “that was kind of mystical, hobbitlike. It was awesome; it looked like a fairy treehouse. She fell in love with it; she made me record that,” Robert said.

He said it was easy to come up with Alissa’s No. 1 wish when Make-A-Wish contacted the family.

It wasn’t possible to hide the work on the treehouse, so plans for the treehouse, drawn by Natural State Treehouses Inc. of Fayetteville, were presented to Alissa and her family.

Thomas said he was traveling with the baseball team and couldn’t attend the ceremony.

“It’s a tricked-out fairy treehouse,” he said. “There’s a door for her, then a door for the fairy. I saw some renderings of it, so it looks like a pretty sweet deal.”

Ashley said the treehouse “looks mystical, magical, sort of. It has glass windows all around it, so light is coming from all different directions.” The house will be about 8 feet in the air.

“It has a rounded out-door, and that’s what she’s really excited about,” Ashley said.

Asked what she is most looking forward to doing in the treehouse, Alissa said “opening and shutting the door.”

And, will she let her brother into the treehouse? Alissa didn’t hesitate: “No!”

Ashley said it makes her happy to think about her daughter having a place, other than her bedroom, to get away by herself.

She said when Alissa came home from school Monday, she was too excited about the progress on her treehouse to concentrate on homework.

Josh Hart said most of the parts for the treehouse were built in their Fayetteville workshop and brought to the Carters’ home, where adaptations were done.

He said the company has had a partnership with Make-A-Wish for three or four years.

“It has become a great, great partnership. Treehouses, when kids have the opportunity to make a wish — that’s one of the most common things people will ask for,” Hart said.

Alissa has been keeping a close watch on the treehouse’s progress, he said.

“She is very excited, very excited. I think we hit on exactly what she had in mind. She is particularly excited about having her own house,” Hart said.

At the end of last week, the treehouse was almost done, and Alissa’s fun was just beginning.