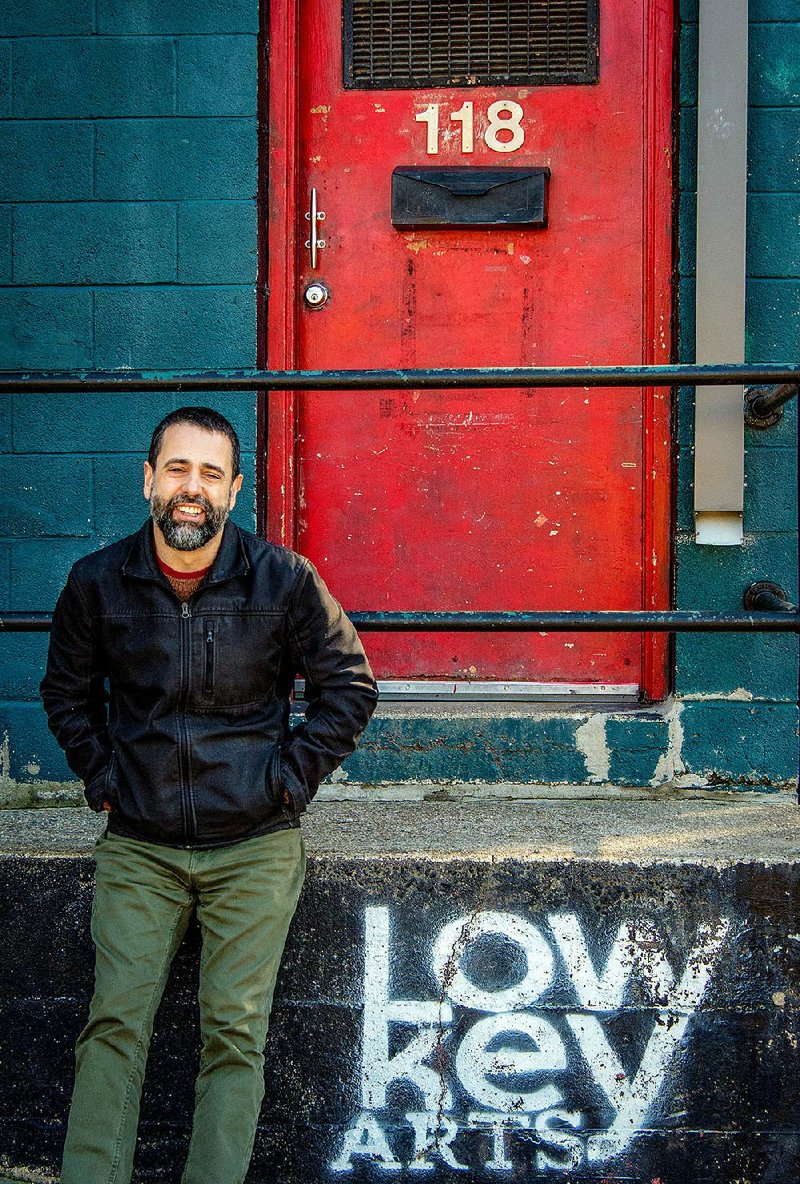 HOT SPRINGS -- This weekend the Low Key Arts performance venue will be packed with music fans and bands during the 14th Annual Valley of the Vapors festival.

But on this chilly January morning, the cinder block building is empty. Sitting at a table with sunlight streaming through the curtained windows behind him, Sonny Kay is talking about the winding road that brought him to Hot Springs in November to become the new executive director of the nonprofit Low Key Arts.

Low Key, which began in 2005, oversees a low-power FM radio station (KUHS), the Valley of the Vapors Festival, the Arkansas Shorts film showcase, the Inception to Projection film class, the Hot Water Hills Music & Arts Festival and other events.

Kay's first trip to Hot Springs was back in 2006, when he and his band Year Future played The Exchange, a venue run by Bobby Missile. The two struck up a friendship, with Kay eventually releasing an album by Missile's band, Attractive and Popular, on Gold Standard Laboratories, the label Kay owned.

Missile was active in booking bands for the Valley of the Vapors Festival and became artistic director for Low Key Arts a few years ago. When the executive director's position came open last summer, he reached out to Kay, who had been living in Las Vegas for six years designing album art.

"When the job came open, my dream candidate was Sonny," Missile says, "So I just called him out of the blue and said 'Hey, I wanted to pitch this to you.'"

Kay says, "I was just going to hear him out and be polite. It was so far away, and my family was on the West Coast. My mom had just moved to Vegas to be closer to me."

But he called back the next day and said he'd come take a look-see. What he found was a town that had changed quite a bit in the 11 years since his first visit.

"When I was here in 2006, it was really sleepy and quiet. In my memory, half of Central Avenue was vacant," he says. "It seemed like a retirement place, like a forgotten resort. Central Avenue now is almost unrecognizable to then, and it's pretty amazing."

He was offered the job and moved to Hot Springs in November, becoming just the third Low Key executive director after co-founder Bill Solleder, who served from 2005-2016, and David Hill, who spent seven months as interim director.

Low Key co-founder and board member Shea Childs says getting Kay was a boon for the group.

"He's an icon in his own right in the DIY music world of the '90s," she says, "and he came with sparkling recommendations."

He also came at a particularly active part of the year for the arts group.

"He got dropped into the middle of the busiest part of the year for Low Key," Childs says. "He's been going to a bunch of meetings and writing grants, doing graphic art, booking bands and running the events. He hit the ground running."

Kay, who turns 46 today, was born in England and spent his early years in Johannesburg and Barcelona, Spain, before moving back to England. His father, who died in 1991, was filmmaker Gilbert Lee Kay (aka Jose Briz Mendez).

"He was most well-known for making spaghetti Westerns," he says. "He was probably most infamous for a film starring William Shatner called White Comanche, which I don't recommend."

His mother, Christine, who now also lives in Hot Springs, was half his father's age when they married.

The family, which includes Kay's two sisters, settled in Los Angeles when he was 7. A few years later they moved to Boulder, Colo., where he graduated high school and earned a studio art degree from the University of Colorado, Boulder.

"I finished school, but school was a sort of secondary notion. I was way more interested in music. I jumped into music with both feet there and never looked back."

While in college, he managed the campus nightclub and sang in the hardcore band Angel Hair before forming the proto-futuristic The VSS and moving to the Bay Area. It was also while in school that he started his Guaranteed Stafford Loan label, its name a sly nod to it being financed by student loans and which later became Gold Standard Laboratories.

The label went on to release records by The Mars Volta, The Rapture, !!!, The Faint, Melt-Banana, Missile's band and many others. Kay also started a distribution company.

By 2007 Kay, who was living in Los Angeles, closed Gold Standard Laboratories. In 2011, he moved to Vegas and concentrated on graphic design and writing.

His digital collage illustrations have been featured on albums by The Mars Volta, 311, Shooter Jennings, The Glitch Mob and many others. Headspaces -- Surrealistic Album Art & Collage, a book of his painting-like work, was published last year.

Making the move with him from Las Vegas was his huge collection of records, art and memorabilia from his years singing in bands, owning a label and making album art.

"I have a tendency to hoard all of that stuff," he says.

There was also his assortment of cactus he started growing as a hobby in the Vegas desert.

"I, um, maybe slightly, and uninformedly, tried to migrate this massive cactus collection here," he says. Most of them survived, he adds.

As for his plans for Low Key Arts, Kay says he's not looking to shake things up:"I have a lot of respect for what Bill Solleder and other people have done, and I don't envision myself as the new sheriff in town. I'm not here to put my name on the map.

"I want to contribute in the most productive and sensible way that I can."