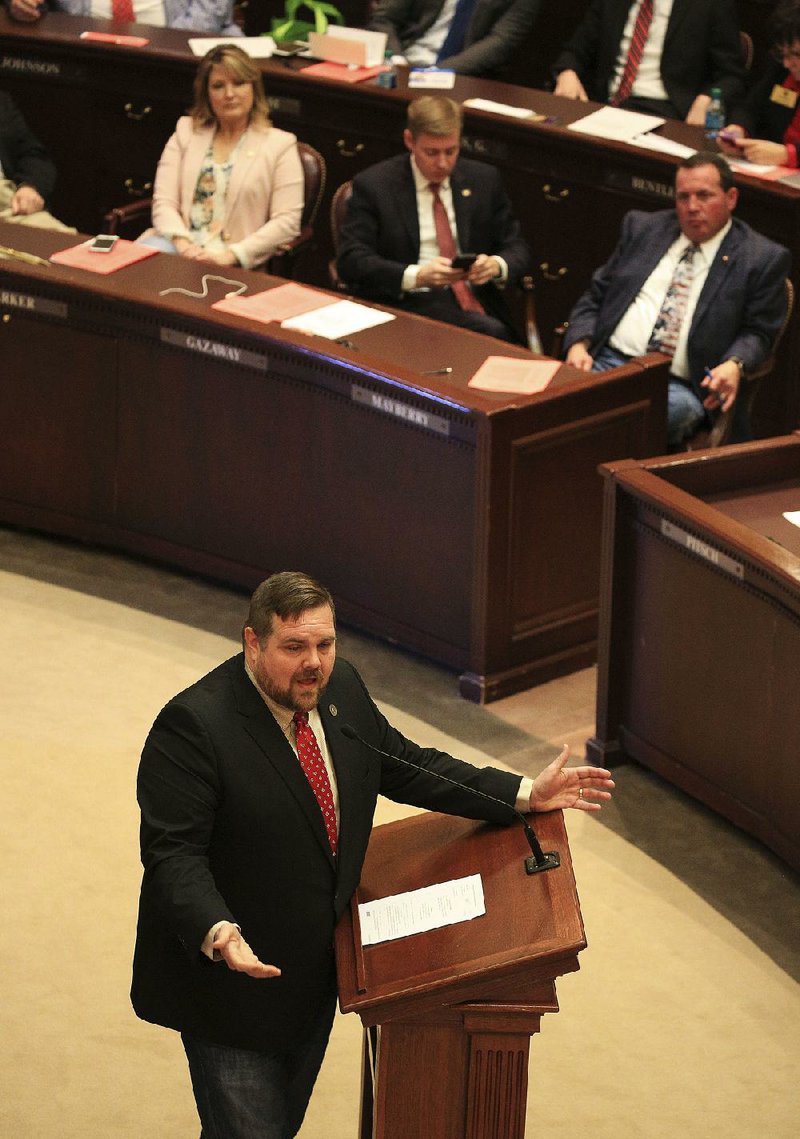 The most contested bill of an otherwise easygoing special session cleared its final hurdle Thursday, as the House voted to affirm the legality of jury-trial waivers written into lending contracts.

About an hour's worth of debate was not enough to derail the passage of the jury-waiver legislation, Senate Bill 5, which passed 66-10, with 12 members voting present.

A similar House version of the bill was sunk in committee earlier this week, and the Senate version, after being amended, needed two attempts to make it out of the upper chamber Wednesday -- surviving skepticism over the hasty process through which the bill was pushed.

Skeptics again questioned the bill on the House floor Thursday, as both Republicans and Democrats asked why they had not heard from bankers, Realtors or residents about the bill, which was pitched as a fix to a recent Arkansas Supreme Court decision affecting the lending industry.

Rep. Bob Ballinger, R-Hindsville, said the lending markets, specifically real-estate lenders, were operating out of concern that they would be forced into lengthy jury trials in disputes with homeowners who had previously waived their rights to a jury trial in their original lending contracts.

"When we first filed [the bill] it was a lot bigger and broader," Ballinger said. "What this bill did is specifically say that you can waive a jury trial. ... It gives some sort of stability to the individuals, in this case, only the lenders."

Another supporter of the bill, Rep. Douglas House, R-North Little Rock, said doing nothing could cause mortgage interest rates to rise.

But several lawmakers stood to ask why, if the bill was indeed an urgent matter necessary for the special session, they had not heard about it from the groups that were supposedly pushing for the legislation.

"I'd really like to talk to my lawyers, and my bankers," said Rep. LeAnne Burch, D-Monticello.

Representatives of the Arkansas Banking Association did not reply to a request for comment Thursday.

The Arkansas Bar Association was neutral toward the bill, as was the Family Council, a faith-based advocacy group that had opposed an earlier version.

Burch, who ended up voting for the measure Thursday, said the bill that had been presented to lawmakers at the start of the week was much different from a draft version she said she had given a signature to so that it could be placed on the call for a special session.

Gov. Asa Hutchinson, who set the agenda for the session, asked lawmakers to gather signatures from two-thirds of their colleagues in support of any legislation they wanted to have considered, in order to show that the bills had broad support and could be passed in a matter of days. The special session started Tuesday and ended Thursday.

The jury-waiver legislation Ballinger filed, along with state Sen. Jeremy Hutchinson, R-Little Rock, originally applied to all contracts. After being defeated in committee, the bill was amended to apply only to lending contracts.

Ballinger said there are thousands of existing contracts in the state that were signed to include jury waivers. Those contracts were potentially voided by the Supreme Court ruling in December, he said, and would be affirmed under his legislation, which applied retroactively.

The subject of the retroactivity clause prompted even more confusion on the House floor Thursday.

Lawmakers who had not heard debate over the bill in committee asked if they were being asked to sign off on legislation that would amend existing contracts and had to be assured that it would not.

Rep. John Walker, D-Little Rock, even questioned the wisdom of passing laws that were purported to help the banking industry, after the practices that occurred in the lead-up to the 2008 financial crisis and the last recession.

"2008's a lot more complicated than that," replied House.

Hutchinson is expected to sign the bill Monday, a spokesman said.