UA library to put bulk of books into storage 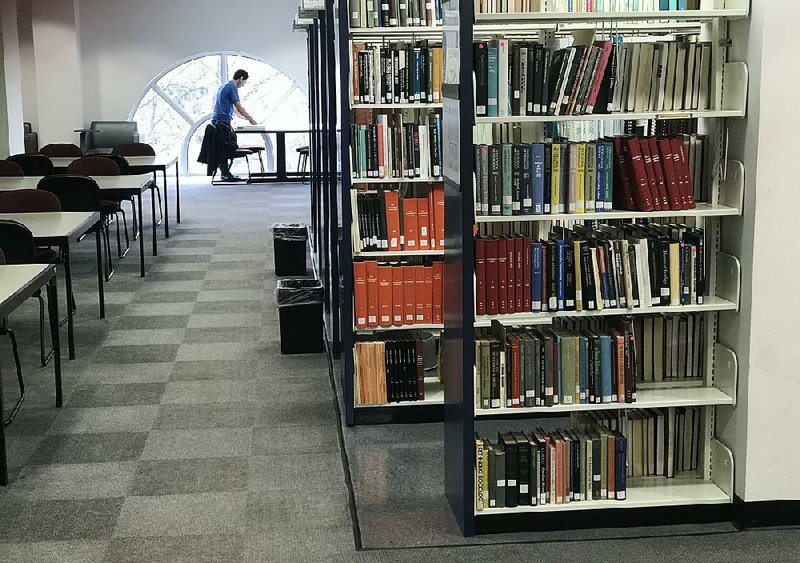 Books fill the shelves in the Mullins Library on the University of Arkansas, Fayetteville campus in this March 17, 2018 photo.

FAYETTEVILLE -- Renovations to the University of Arkansas, Fayetteville main campus library will result in up to three-quarters of books and other printed materials moving to a new off-campus storage facility.

The move comes as campuses nationally have seen declines in the number of items being checked out, with UA also seeking to add more group study space within Mullins Library to keep up with growing numbers of students.

About 1.2 million books and other bound printed materials sit on the shelves of the four-level, approximately 227,660-square-foot Mullins Library, said Kathleen Lehman, head of user services for UA libraries. She said the 1.2 million estimate leaves out some categories of printed materials, including textbooks kept on reserve, a collection of books for children, and oversized volumes.

An estimated 300,000 to 350,000 books and bound serials will remain after items are transferred into storage, said Joel Thornton, head of instruction and liaison services for UA libraries. Lehman said the moving will begin as soon as this summer, while renovation work is scheduled to begin in late 2018, according to information posted online by UA.

"Many libraries in the U.S. are going through this exact same process, or have been through it recently in the last five years," said Carolyn Henderson Allen, dean of UA libraries.

Rick Anderson, associate dean for collections and scholarly communication at the University of Utah, has written about circulation trends in major research libraries.

"What we're seeing in our research libraries is an increased pressure on our space and decreased demand for immediate access to our printed books," Anderson said.

At large research libraries in North America, "circulation is going down pretty dramatically and has for at least 15 years," Anderson said.

Olivia Hightower, a sophomore business student making use of a Mullins Library study room on a recent afternoon, said she's never checked out a book from the UA library.

She said she frequently studies at the library, but over the past two years, "I've only seen like a handful of people grab a book." Rather than utilize the library's print collections, she said she's had a professor direct her to the library to get help with online research.

Thornton said demand is increasing for the library's electronic resources.

The use of electronic resources varies by academic discipline, noted Lisa Corrigan, an associate professor of communication who has studied the campus libraries as part of a university task force convened to examine UA's research.

"I think priorities have to be student accessibility to resources, and then faculty research," Corrigan said.

Asked about shrinking the number of books in the main library, "I do think it's a big change," Corrigan said. "I think, especially for the humanities, it's a huge change, because so many of us rely on the actual printed materials."

Lehman said the materials moving to storage will remain accessible.

Lehman and Thornton said the staff will make multiple trips per day to the approximately 27,000-square-foot, high-density storage building less than a mile from the main campus. The facility is being built using cross-laminated timber at an estimated construction cost of $11.4 million, according to UA.

The Special Collections Department houses items such as the collected papers of former U.S. Sen. J. William Fulbright, as well as some nonprint artifacts of historical interest. Some items will move to the new storage facility, Lehman said.

However, as libraries evolve, the emphasis is more on such historical items than the sheer size of a collection, Lehman said.

"We're less of a warehouse for stuff that other people have, and try to focus more on what can we provide that's unique," Lehman said.

In addition to special collections, at libraries it's now "more about what journals do I have access to, how quickly can my request be fulfilled," said Lehman, adding that there is greater emphasis on utilizing networks of libraries to provide access to materials requested by patrons.

"What we can get for you is so much greater than it would have been 10-20 years ago," Lehman said.

Norm Dennis, a senior associate dean in UA's engineering college, also serves as chair of the university's Faculty Senate Library Committee. The faculty did not vote on the changes at Mullins Library, but Dennis said it's understood that extra collaborative space will be gained.

"Storing books in the central part of campus that are used so infrequently that they're simply taking up space doesn't make sense," Dennis said.

The library staff, beginning last year, decided on criteria for which books will remain on the shelves, Thornton said.

Books published since 2000, as well as items checked out two or more times since 2007, will remain in Mullins Library, Thornton said, at least generally. The library staff has the discretion to either add or remove items, he said.

Subject selectors, as specialist library staff members are known, can say, "even though it hasn't circulated, this is important to my subject and to my subject area," Lehman said. Those items will remain.

Daniella Oregon, 19, a freshman at UA studying with Hightower at Mullins Library, said she grew up reading printed books.

"It is sad to know that there will be less books," Oregon said when told of the plan to put most of the Mullins Library books into storage.

But she and Hightower described the library as getting crowded as students prepare for final exams.

"You better get here at 7 a.m., because it's just a free-for-all," Hightower said.

While Oregon said she appreciates the feel of printed books, "maybe it's taking a step in the right direction, because it will open up more space for students."