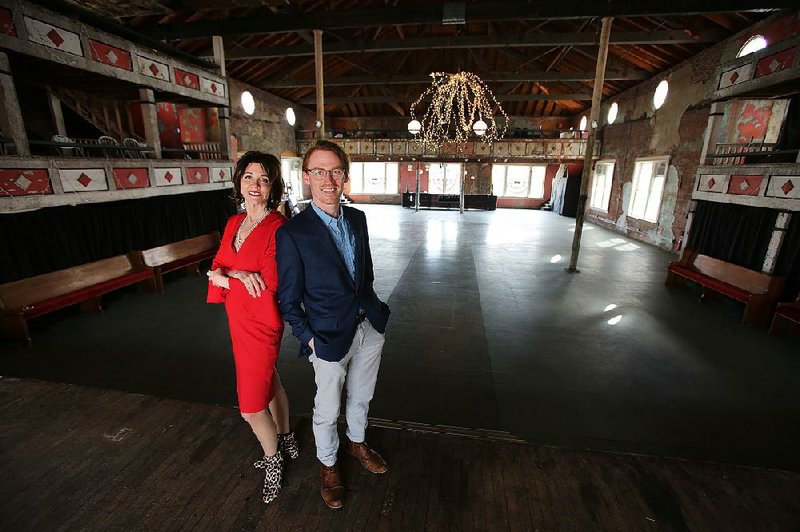 Kerry McCoy and her son, Matthew, recently received a grant to add an elevator for the Dreamland Ballroom public-access project.

A historic ballroom where the likes of Ella Fitzgerald, Louis Armstrong, B.B. King, Ray Charles and other prominent black entertainers sang and performed for hundreds of Little Rock residents decades ago is a step closer to returning to an entertainment venue accessible to the public.

The Dreamland Ballroom in Taborian Hall at 800 W. Ninth St. is the recipient of an almost $500,000 federal grant that will allow its nonprofit board to install an elevator for the building and put centralized heating and air in the third-floor ballroom.

The project was one of two in Arkansas selected to receive an African American Civil Rights Grant from the U.S. Department of Interior and the National Park Service last week.

Out of $12.6 million doled out by the federal grant program this cycle, just under $1 million will go to Little Rock. The other nearly $500,000 grant was awarded to the Little Rock School District for its continued efforts at restoring the historic Central High School. The money will be used to replace 26 windows on the school's front facade.

Nationally, grants will fund 51 projects in 24 states ranging from preserving a baseball stadium in New Jersey formerly used by the Negro National League to planning exhibits, trails and statewide surveys in other states.

In Little Rock, the Friends of Dreamland board has been working for almost a decade to raise funds to build an elevator at Taborian Hall so the third-floor ballroom is handicapped accessible. The building is located in what used to be a bustling black business corridor.

Its current owner, Kerry McCoy, bought the property in 1990, fixed a hole in the roof and renovated the first and second floors over the years for her business, Arkansas Flag and Banner. She wants to eventually open up the historic ballroom to the public and create a museum, but it currently is only booked as a private venue.

Lack of central heating and air prevents summer or winter events, and the lack of an elevator makes it inaccessible to the public at large. Because the ballroom takes up the entire third floor, Friends of Dreamland must build an addition to the structure for an elevator so the project doesn't mess with the integrity of the ballroom.

Executive Director Matthew McCoy said it will still be a few years before the project is complete, and the board is now working to determine what public access would look like.

"Our goal for so long has been getting this elevator; now what are our new goals now that we can actually use the ballroom?" McCoy asked rhetorically. "Historical outreach is big, because this whole area we are in down here on Ninth Street has a lot of historical significance, particularly with the black community in Little Rock, and there's very little known about it.

"Right now it's all warehouses and empty grass lots, so you would never know there was a thriving business and entertainment district down here," he said.

In its heyday, Taborian Hall was the Arkansas stop on the "Chitlin' Circuit" -- a series of venues across the nation that were safe for black artists to play. The Little Rock stop was between the Memphis and New Orleans stops, so Dreamland served as a venue for all the greats -- Fitzgerald, Armstrong, King, Charles, Fats Waller, W.C. Handy, Etta James and more.

Some work has been done to the ballroom. In 2010, the floor was reconstructed with a plywood subfloor. McCoy has said she wants to make sure not to restore the venue too much. The paint on the walls is peeling, but many longtime residents want that to stay, because it's the same paint that covered the walls when they frequented the venue in their youth.

The Central High School project that received funding will be implemented much sooner.

It is expected to take 120 to 150 days to replace 26 windows on the front column facade of the historic high school. District officials hope to complete the work over the summer when students aren't in school.

The last time the school's windows were replaced was in 1982. Before then, they hadn't been touched since the building was constructed in 1927.

"We have to be very careful that we maintain the integrity and historic aspects of the building and follow all guidelines for replacing. [The current windows] have failed due to age and just their condition. They are just worn out, faded and worn," district grants director Linda Young said.

Replacing the windows is part of a larger, long-range plan of work for Central. The district is tackling it in phases when funding or grant opportunities become available, Young said.

U.S. Secretary of the Interior Ryan Zinke said in a news release that the federal government sets aside money for the grants to help places "tell an essential piece of that story through the African American struggle for civil rights and equality."

National Park Service Deputy Director Dan Smith said the grants are a way to "tell a more complete narrative of the African American experience in the pursuit of civil rights."

Alabama received the most grants in the 2017 funding cycle, with nine projects awarded funding.

Nearby, Memphis received $50,000 for its Memphis Heritage Trail and $500,000 for its Clayborn Temple Interior Sanctuary restoration project, and the National Trust for Historic Preservation received $20,000 for the temple and a 1968 Memphis Sanitation Workers Strike project. 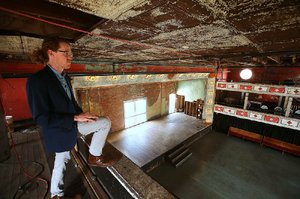 Photo by Thomas Metthe
Matthew McCoy looks at the Dreamland Ballroom in Little Rock from the top balcony on Friday.