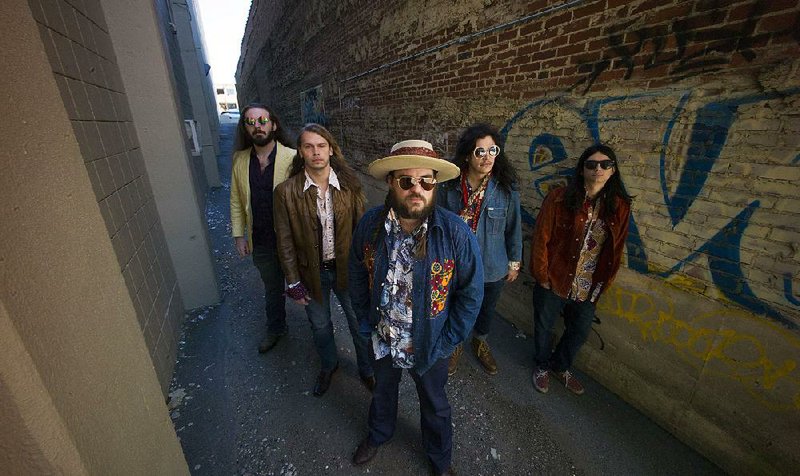 Most big-time bands tend to bring a slightly less big-time band or two with them on tour to open the show each night.

Not Bon Jovi. During the This House Is Not For Sale Tour the hit making pop-metal outfit from New Jersey has been using local bands to warm up the crowd at each stop. Opening the proceedings at Verizon Arena tonight is Little Rock five-piece deFrance who, like the headliner, is named after the lead singer.

When the call came from concert organizers, the group figured it could make some room in its calendar for the gig.

"They asked if we had our schedule free and we were like, 'Yeah, we think we can fit it in our schedule to open for Bon Jovi,'" says singer, guitarist and band namesake Drew deFrance with a chuckle. "We were really honored that they asked us and are really thankful for the opportunity."

The group got started in 2015 and includes drummer Daniel Curry, bassist Connor Roach, guitarist/backup vocalist Elliott Cotton and guitarist Andrew Poe. Since getting off the ground, the band has logged more than 400 shows locally and across the country, deFrance says.

Curry, 31, and deFrance, 30, grew up in Camden and played in a high school band together. After graduation, they headed for Austin, Texas, and played in groups there before returning to Arkansas in 2010. They were in various central Arkansas bands before deFrance, who was in Stephen Neeper & The Wild Hearts among others groups, decided it was time to start something of his own.

"I was writing an incredible amount of material," he says, "and I had a drive to do this on my own versus being a guitar player in a band. I wanted to be a major role player."

To that end, he played most of the instruments on a 2015 album, Home, with a little help from Curry and another drummer, Evan Barr. The album is a radio-ready, fist-waving dose of soulful, classic and Southern-tinged rock that would sound perfectly at home next to your Tom Petty and, yes, Bon Jovi records.

And there's more to come. DeFrance says the group has recorded two more albums and is shopping around for a label and management.

"The first record was to get our name out there. We finished the second and third albums rather quickly, but we didn't want to release them independently like the first one. We've been trying to sign with somebody."

The deFrance members are all too young to have experienced Bon Jovi's frizzy-haired, acid-washed, '80s heyday firsthand, when the group was all over MTV and radio with hits like "Wanted Dead or Alive," "Livin' on a Prayer," and "You Give Love a Bad Name," but that doesn't mean they're not fans.

Curry says his dad turned him onto the Jersey rockers: "When I was growing up, my father was always getting me into different classic rock. I've been hearing those songs my whole life."

DeFrance also notes that Bon Jovi, like Aerosmith and a few others, had a career resurgence after that first wave of fame.

"When me and Daniel were in high school in the early 2000s, they had a hit with 'It's My Life.' I remember seeing that on VH1. Jon's one of the best songwriters of that era, and I was always a guitar nerd kid, so I learned all of Richie Sambora's parts on guitar." (Sambora, a member of Bon Jovi since 1983, left the band in 2013).

Although the deFrance guys have logged hundreds of shows, not only in this band but with others, do they think there will be a few more butterflies before hitting the Verizon Arena stage tonight for what will be their biggest gig to date?

"It's more of an excitement," Curry says.

DeFrance, whose first concert was seeing Aerosmith at Verizon, concurs: "It's not really nervous butterflies, but excitement.

"We've been dreaming about that kind of atmosphere and stage ever since we were 15."