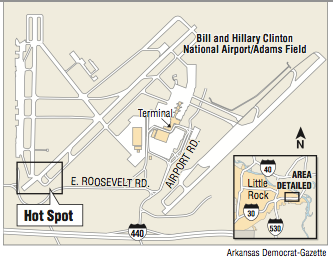 A map showing the Bill and Hillary Clinton National Airport/Adams Field with hotspot.

A feature at the state's largest airport that business pilots find convenient will be eliminated under a Federal Aviation Administration nationwide initiative to reduce airfield danger.

The feature, which the FAA calls a hot spot, at Bill and Hillary Clinton National Airport/Adams Field allows aircraft easy access to two runways that almost come together on the west side of the airport, where corporate aircraft are based. The FAA says hot spots have "a history of potential risk of collision or runway incursion."

Once the hot spot is eliminated, business pilots say they no longer will have the convenience of using either runway, particularly on takeoff, and they will burn more time and fuel to reach the longer runway.

Separating the runways is part of a package of up to $60 million in changes to the airport that will require a few years of planning, said Ron Mathieu, executive director at Bill and Hillary Clinton National Airport/Adams Field.

Banker John Rutledge, a member of the Little Rock Municipal Airport Commission, is well aware of the amenity, which he said translates into fuel savings and less wear and tear on the high-performance turbine engines that power many modern business aircraft. He is a pilot.

"As a pilot, when the engines are turning, you are trying to get where you are going," Rutledge said. "Any sort of ground taxi, any sort of thing you are doing across an airfield, there's engines turning. Time is money, really, and fuel is one of the greatest costs of an airplane."

But the FAA has called runway safety a "significant challenge and top priority."

There are more than 58 million takeoffs and landings annually at airports across the nation and about three runway incursions a day by vehicles and pedestrians -- mostly involving people working for the airport or on airport construction.

A 2012 incident at the Little Rock airport involved a McDonnell Douglas MD-87. The twin-engine aircraft, which can carry up to 130 passengers, was on final approach after being cleared to land on Runway 4L. The end of Runway 4L is 186 feet from the end of Runway 36 in the southwest corner of the airfield just north of Roosevelt Road.

Meanwhile, a Cessna 206, a single-engine aircraft that can carry a pilot and up to five passengers, was instructed by air traffic controllers to taxi to Runway 4L via Taxiway Alpha, which turns onto Runway 36 and allows aircraft to cross over to Runway 4L. Aircraft are supposed to stop short of Runway 36 until air traffic controllers give them clearance to go to either runway.

The Cessna, according to the FAA, went to the common "hold short" line for both runways, leaving the aircraft in the small space separating the two runways.

Controllers "noticed the intrusion of the C-206 and told the MD-87 to go around," the FAA said. "MD-87 go-around instruction was issued at a two-mile final to Runway 4L."

Three years later, a Learjet, a twin-engine business jet that carries two pilots and up to six passengers, was cleared to take off on Runway 36. The pilot read back the instructions correctly, according to the FAA, but the jet proceeded to cross Runway 36 and taxied onto Runway 4L.

Meanwhile, an Embraer ERJ145, a twin-engine regional jet that can carry up to 50 passengers, "was on a half-mile final to Runway 4L and advised [controllers] that they were going around due to an aircraft on the runway," the FAA said.

The FAA's plan rankles the corporate pilots. Dillard's Inc. and Stephens Inc. are among the companies with aircraft based on the west side of the field.

The chief pilot for Stephens, Bill Goff, told a Clinton National consulting company, LeighFisher, that he has been flying out of Clinton National for 40 years with "minimal issues in the referenced intersection," according to an analysis of the issue by LeighFisher.

Goff "considers elimination of the pavement between the two runways to be a serious inconvenience for operations," and expressed concerns about the FAA plan for the airport requiring two midfield crossings to reach Runway 4L, which Stephens aircraft use for eastbound departures and anytime the runways are wet or icy.

Like Rutledge, Goff expressed concern about the additional taxi time and wear and tear on the aircraft.

He also noted that the FAA plan will require new procedures for the airport's advanced movement and guidance control system, which is used during periods of low visibility to navigate the airfield.

Jim Brown, flight operations director for Dillard's, said separating the runways "means considerably more taxi time would be required when using 4-L for departures," according to the LeighFisher report. "This of course would increase our fuel cost per flight."

He said Dillard's pilots preferred using Runway 4L for departures rather than Runway 36 "because of the added safety margin provided by the longer runway." Runway 4L is 8,273 feet long while Runway 36 is 6,224 feet.

Rutledge said construction fatigue has set in on the west side of the airport, and its tenants aren't looking forward to another round. A recently completed project addressed taxiways on that side of the field, disrupting operations for an extended period.

"I would argue probably 10 years of construction has impacted the west side of the field," Rutledge said. "My guess is they are a little tired of it in general."

"Safe procedures and techniques for managing the Hot Spot [have] been used for years," the controllers said, according to the report. "We cannot endorse the Airport Division's decision to remove ... the Hot Spot."

Another runway safety improvement mandated by the FAA is elimination of high-speed taxiways angled to allow arriving passenger jets to quickly exit the runway to make way for other arriving aircraft. The agency prefers taxiways to intersect at runways at 90-degree angles, much like a standard vehicle intersection.

Mathieu said the work wouldn't begin for at least five years, given all the planning involved. The FAA, he added, has agreed to save eliminating the shared runway space for last.

"It's not a popular decision by the FAA," Mathieu said. "Air traffic control doesn't like it. Certainly the folks on the west side don't like it. But at the end of the day, this is consistent with what the FAA is doing across the country."