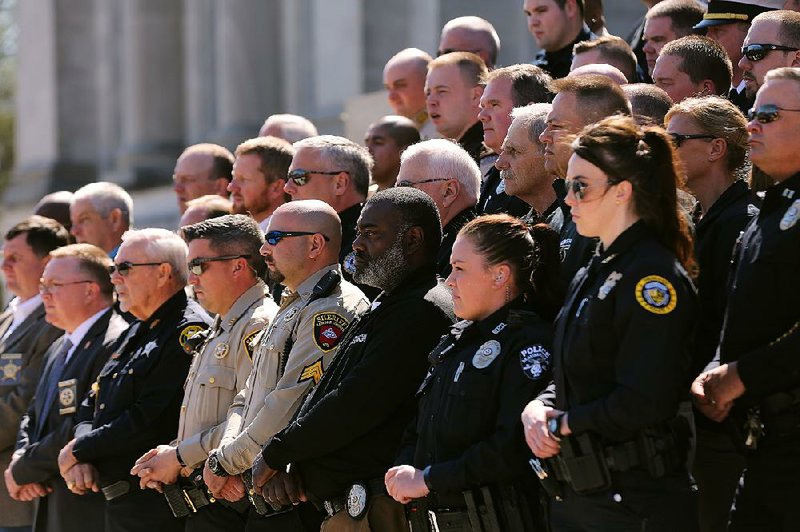 Law enforcement officers from across Arkansas stand on the Capitol steps Wednesday as officials announce an opioids lawsuit that was filed in Crittenden County.

The state and a coalition of 87 Arkansas counties and cities are suing the makers and distributors of addictive painkillers for their role in the opioid epidemic.

The suit alleges that drug manufacturers exaggerated the benefits of opioid use for chronic pain and concealed the narcotics' long-term side effects. Defendants also include distributors, retailers and a handful of Arkansas doctors and pharmacists who the suit claims are complicit in the misuse of prescription opioids.

Attorneys involved in the case said that an additional 195 cities have "signed on" to the litigation and "will become plaintiffs in a case ... somehow." They didn't say when that would happen.

The suit is separate from a federal lawsuit filed by the Association of Arkansas Counties in December. That case is now part of a larger effort called the National Prescription Opiate Litigation, formed to combine at least 64 separate suits. The group litigation was transferred to the Northern District of Ohio.

Any potential money from the newly filed lawsuit in Arkansas -- which mostly targets Purdue Pharma, Johnson & Johnson and 50 other opioid manufacturers -- will pay for costs connected to the public health problem, attorneys said.

"Our community is inundated. ... The time for change is now," Trumann Police Chief Chad Henson said at a Wednesday news conference. "This is the step in the right direction to getting the resources we need to fight the epidemic."

There are more opioid prescriptions than people in Arkansas -- over 114 scripts dispensed for every 100 residents, according to 2016 U.S. Centers for Disease Control and Prevention figures.

The state's prescription rate is second only to Alabama, which has 121 scripts to 100 residents.

Dozens of other officers and local leaders attended Wednesday's conference, which announced the joint effort by the state, cities and counties to get the opioid industry to "clean up its mess."

Every official who spoke at the conference linked the state's prescription opioid use to increased heroin overdose deaths and expressed worries about a looming heroin crisis. Police say heroin is cheaper and more readily available than prescription opioids.

Montgomery also said there weren't enough existing drug treatment options for addicts. He encouraged those affected to "share their stories" with local officials.

"Help us eventually save lives," he added.

State records show officers saved 62 lives using naloxone, an overdose-reversal drug, since December 2016. Police across Arkansas have been equipped with nearly 55,000 kits of the drug; each kit costs between $75 and $100.

The 141-page lawsuit alleges that the opioid industry encouraged doctors to prescribe more painkillers, even when patients exhibited signs of addiction, and that companies also paid certain physicians to promote opioids to their colleagues.

Distributors, the court document also asserted, "ensured that opioid supplies abound in Arkansas and have made it one of the [most] well-stocked states in the country."

The Healthcare Distribution Alliance, which represents some companies listed in the suit, sent the Arkansas Democrat-Gazette a response to the claims listed in the December suit filed by the county association.

Opioid distributors "understand the tragic impact the opioid epidemic has on communities across the country" and are "deeply engaged in the issue and are taking steps to be part of the solution," Jill Courtney, a spokesman for the national trade association, said then.

"The idea that distributors are solely responsible for the number of opioid prescriptions written defies common sense and lacks understanding of how the pharmaceutical supply chain actually works and how it is regulated," she said in an email.

The complaint also listed a handful of in-state physicians, retailers and pharmacists, previously charged with criminal participation in "opioid diversion schemes." Another defendant is Linden Care, a "concierge pharmacy service" that delivered fentanyl, an opioid 50 to 100 times stronger than morphine, to Arkansas residents. 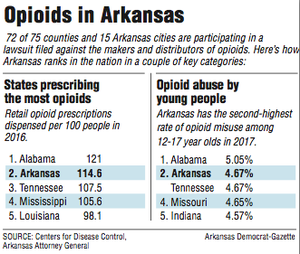