I Can Only Imagine is proof Christian films can succeed 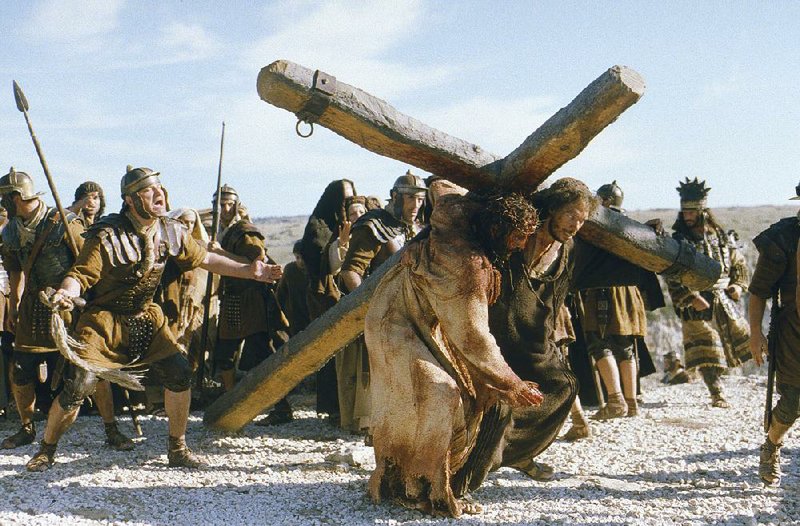 Jim Caviezel (center), who portrayed Jesus Christ in the 2004 movie The Passion of the Christ, appears in Paul, Apostle of Christ, which debuted Friday. In an attempt to draw larger audiences to Christian-theme movies that no longer stand out as a novelty, filmmakers are expanding their scope — and putting their faith in big-name stars such as Caviezel.

In late February, actor Dennis Quaid joined religious rock group MercyMe at a Dallas concert to sing -- and promote his new movie. The band has toured for much of the last year in support of the new film I Can Only Imagine, which tells the story of how lead singer Bart Millard wrote the all-time best-selling Christian single after the death of his father.

For a biblically minded movie to succeed in theaters, it used to be enough to screen the film for pastors months ahead of time and create study guides for campus youth groups.

As the campaign for the new Christian music bio-pic illustrates, that's no longer the case. Studios now have to go to greater lengths to attract devout audiences in an increasingly challenged faith-based film business, as the market for Christian movies becomes more crowded.

"Because there have been so many movies made for this audience, they have become much more discerning," said Howard Cohen, co-founder of Roadside Attractions, the distributor of I Can Only Imagine. "And they will choose the ones that not only have a strong, Christian message but are bigger-feeling, more studio-type films."

Just a few years ago, the faith-based genre produced multiple surprise hits as studios increased investments in religious-theme movies, resulting in successes such as Heaven Is for Real and God's Not Dead. The rate of faith-based films released in theaters annually has doubled since 2012 to about 12 a year.

But the genre is now in a surprising slump. The last bona fide commercial hit designed for religious audiences was Lionsgate's The Shack, about a man's encounters with personifications of God, which collected $97 million worldwide.

Movies explicitly about people practicing or defending their beliefs -- once a reliably bankable subgenre, despite poor reviews -- have delivered diminishing returns.

God's Not Dead 2 grossed $20 million in U.S. and Canadian theaters in 2016, a third of the domestic box office of its predecessor. (Another sequel comes out Friday.) Titles such as Same Kind of Different As Me and A Question of Faith faltered at the box office last year.

"There's been significantly more films trying to compete for oxygen, and a lot of them have failed financially," said Rich Peluso, head of Sony Pictures' faith-based label Affirm Films.

That's a problem for a movie industry that has been eager to get churchgoers from the pews to the theaters ever since Mel Gibson's The Passion of the Christ grossed $370 million domestically and set the standard for getting churches to buy tickets in bulk.

Christians are an appealing market for Hollywood, which is looking for ways to expand the cinema audience as digital competition causes long-term declines in theatrical attendance. The movie business is routinely criticized for overlooking the values of religious Americans, and faith-based filmmaking was seen as a way to rebut that narrative and attract an audience that usually doesn't go to the movies.

Facing a wearied audience, some filmmakers are trying to adapt by expanding into more subgenres, including romances, sports dramas, comedies and documentaries.

"We're developing beyond just the genre of sermon-on-film," said Bill Reeves, head of Tennessee-based WTA Group, a marketing firm that specializes in faith-based media. "We're trying to answer the question of 'What else is out there?'"

Others are putting their faith in Bible-based stories with big-name stars. On Friday, Affirm Films released Paul, Apostle of Christ, which blends scripture and fiction to tell the story of the apostle's last days. The new movie features actor Jim Caviezel in his first biblical role since he played Jesus in The Passion of the Christ.

Affirm is hoping Caviezel's star power with the faith audience will make a difference at the multiplex. To promote the film, the actor spoke at an event at Liberty University that was simulcast to 1,200 churches with clips of the movie.

"We definitely are connecting closer to the heart of pastors and church leaders than we have on pretty much any other film we've done," Affirm's Peluso said.

A less traditional pick for the faith-based audience is Universal Pictures' Unbroken: Path to Redemption, a follow-up to the 2014 film about Olympic runner and World War II prisoner of war Louis Zamperini, set to debut in October.

The new Unbroken -- about Zamperini's life after the war, including his struggle with post-traumatic stress disorder, alcohol abuse and conversion to Christianity -- is a direct response to a more demanding faith-based audience, producer Matt Baer said.

The first Unbroken, released by Universal and directed by Angelina Jolie, grossed $114 million in U.S. and Canadian theaters. Yet, the film drew criticism from religious audiences because it did not include the veteran's religious awakening inspired by evangelist Billy Graham. The late preacher is played by his grandson Will Graham in the new film.

Unbroken: Path to Redemption is the ideal example of where the faith-based movie is headed," Baer said. "It's a true story that utilizes faith in a natural way. It's not shoehorned in."

It's unclear whether the latest crop of Christian films will succeed.

I Can Only Imagine, a $7-million production shot in 25 days in Oklahoma City, grossed around $17.1 million its opening weekend, far exceeding the prediction of $4 million, according to people who read pre-release audience surveys.

Jon Erwin, who directed the movie with his brother, Andrew, knew it was a risky bet. He said a film executive once dismissed the idea of a Christian music bio-pic, telling him the audience for such a movie was about 18,000 people.

"I hope we prove him wrong," Erwin said. "I have faith that there's an audience for this film and other films like it."

Print Headline: I Can Only Imagine is proof Christian films can succeed