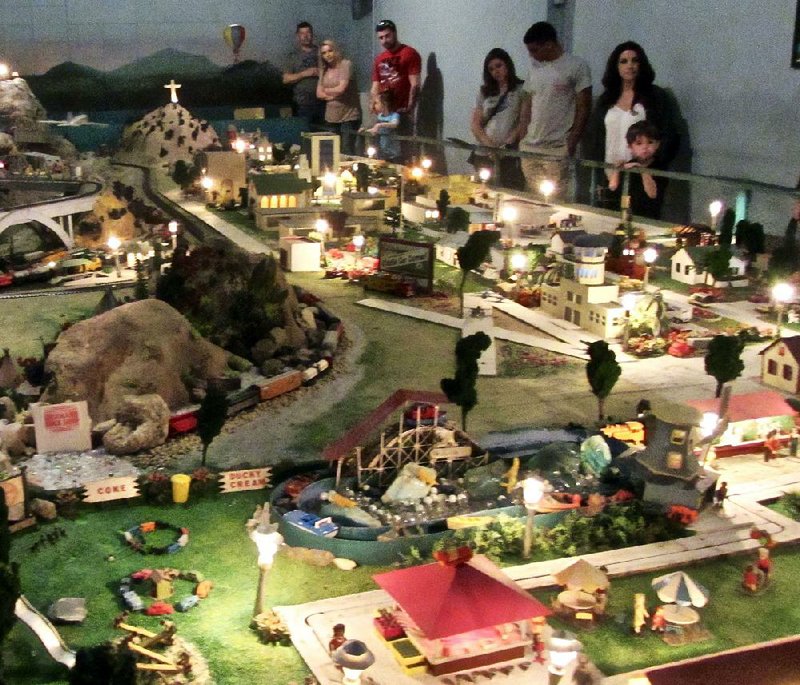 Visitors to Tiny Town in Hot Springs view a melange of landscapes traversed by model trains. A miniature copy of the Christ of the Ozarks statue can be seen.

HOT SPRINGS -- Cameo roles are played by luminaries the likes of Elvis Presley, Dolly Parton and Willie Nelson at one of the quirkiest and friendliest attractions in the Spa City.

These are hand-crafted miniature figures, most only a few inches tall, portraying famous personages past and present. They populate Tiny Town, which has been welcoming families for a half-century to the Lilliputian domain painstakingly crafted by the late Frank Moshinskie and now operated mainly by his son, Charles.

Part of the pleasure here is Charles' homespun narrative as he points out some of the scenarios in the rectangular exhibit, which his father brought partly completed to Hot Springs from Pennsylvania in the 1960s.

Noting that the senior Moshinskie once accidentally stepped on a park bench occupied by a mini-couple he'd carved, the son passes along a pun: "My father said, 'Well, they sure met their maker, didn't they?"'

As visitors saunter around Tiny Town's periphery to "see life as it was in the 1960s," there are signs to be read and buttons to be pressed -- sometimes to control the circling model trains, sometimes to activate the miniature tableaux.

"This is a creation of the Moshinskie family through the last 50 years," reads an introductory posting. "Made from scraps of things you throw away at your home -- tin cans, apple-box crates, coat hangers, cardboard boxes from shirts, etc. It was a family custom to build one under the Christmas tree each year until it got too large. So it was put out for people to enjoy."

The eclectic settings show scenes from 22 states. The miniature of South Dakota's four monumental stone faces on Mount Rushmore was carved from a 2-by-4 board. It's fair to say that the wee images of Washington, Jefferson, Lincoln and Theodore Roosevelt bear only a slight resemblance to the originals. They are endearing nonetheless.

One of the more elaborate displays might be viewed as a bit politically incorrect in the 21st century. It depicts a Wild West scene: "The Indians on the warpath wound the cowboy in front of the covered bridge. Indian canoes are pumped around by jet streams from a washing machine pump. The tepees are made from cardboard shirt separators."

A whimsical tableau is set at a campsite: "Park rangers chase bears out of the picnic area while one bear drinks a 7UP. The man has climbed up the tree leaving his wife behind."

Along with Presley, Parton, Nelson and a couple of other music stars, Tiny Town depicts characters such as lawman Wyatt Earp and television actor Matt Dillon. In a scene inspired by Gunsmoke, the inches-tall marshal "takes the badman to jail, while behind the jail a robber is hanged."

The tallest structure is a model of the Commonwealth Insurance building in New Orleans: "It is the most expensive building in Tiny Town because it cost $4 for the plastics to make it. All the other buildings are made of scraps."

Charles Moshinskie says he isn't sure what will become of the attraction when he gets too old to keep it going. Meanwhile, his lively commentary helps bring to life an imagined American past. As low-tech as Tiny Town is, it can be said to create a virtual reality of its own.