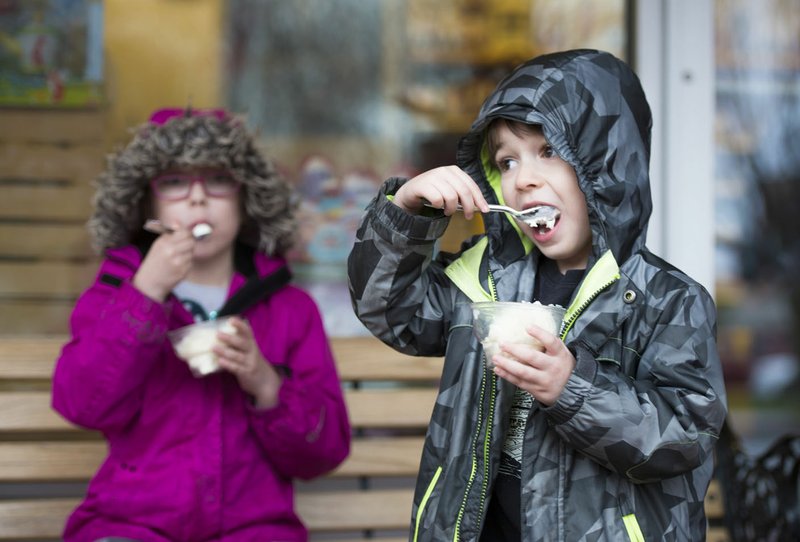 Henry Sosa (from right), 4, and Lucy Sosa, 6, of Kansas City Mo., eat ice cream Thursday at The Walmart Museum at in Bentonville. Yarnell's Ice Cream participated in the centennial celebration of Sam Walton's birthday, providing free butter pecan and homemade vanilla ice cream, courtesy of Walmart. According to the museum, Walton loved butter pecan ice cream. Alice Walton said she has many happy memories of often going for ice cream with her dad, something special the two of them shared.

BENTONVILLE -- Northwest Arkansas wouldn't be what it is today if Sam Walton's vision didn't extend beyond his retail company, a group of panelists discussed Thursday in the Walmart Museum.

The panel was part of the museum's Centennial Celebration of what would have been Walton's 100th birthday. Walton, founder of Walmart and Sam's Club, was born in Kingfisher, Okla., on March 29, 1918. He died April 5, 1992.

There will other events and activities through out the rest of the year. Events will be updated at www.walmartmuseum.com.

Walton was one of the founders of the Northwest Arkansas Council.

"He knew we weren't large enough to be anything big enough in the world without banding together as a region," Clifford said, explaining that though J.B. Hunt and Don Tyson were involved in the council's creation, they didn't have the vision that Walton did. "It was Sam's vision that really propelled us into who we are today."

Stacy also spoke of his wife, Helen, and her generosity and involvement in the community as well as her importance to Sam Walton.

"She was the driving force behind him," he said. "She's what kept Mr. Walton grounded."

Panelists said they don't remember having conversations with Walton where he spelled out his views on giving back to the community but said that principle of his is evidenced by the work of the Walton Family Foundation and Walmart Foundation today.

"I doubt they knew how big it would be or how far it would reach," Stacy said of the Walton Family Foundation.

Sam and Helen Walton established the foundation in 1987. Their children and grandchildren lead the foundation, which seeks to make long-term differences in education, environment and quality of life in Arkansas and the Mississippi Delta.

Walton and his family's generosity to the community has helped make Northwest Arkansas one of the most philanthropic regions, Trammel said.

"This family has sent a trend that the whole world recognizes," he said.

The panel was just one of several activities the museum held in honor what would have been Walton's birthday.

Live DJs got the beats bumping mid-morning. Derek Lidow, Princeton University professor of entrepreneurship and author of Building on Bedrock:What Sam Walton, Walt Disney, and Other Great Self-Made Entrepreneurs Can Teach Us About Building Valuable Companies, held a reading and book signing.

Mayor Bob McCaslin read a proclamation during a celebration that included guest speaker Jayne Lowe, the incoming district governor of Rotary Club, and a performance by the West High School band. Walton is a past president of the local Rotary Club.

The day concluded with a concert by jazz pianist and vocalist Champian Fulton.

Thursday's activities were just a kick off the museum's Centennial Celebration of Walton. There will other events and activities through out the rest of the year. Information will be updated at www.walmartmuseum.com. 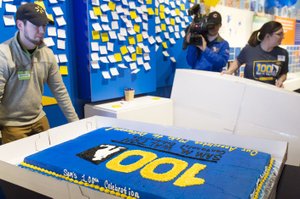 Photo by Charlie Kaijo
Brandon Eddins (left) of Bentonville unveils the centennial cake Thursday at The Walmart Museum in Bentonville.