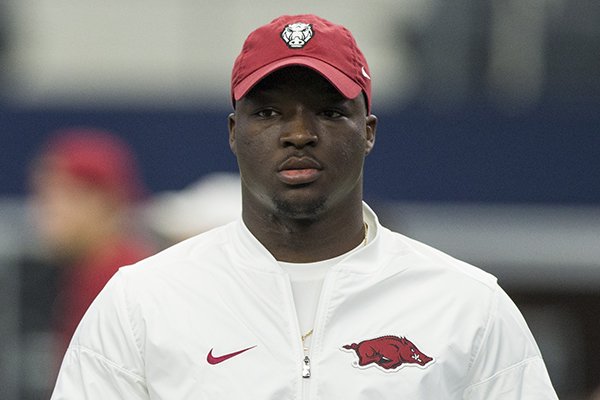 Former Arkansas running back Rawleigh Williams watches warmups prior to a game against Texas A&M on Saturday, Sept. 23, 2017, in Arlington, Texas.

Williams, 21, is suing the parties for breach of contract, claiming they have not paid on a $1 million disability insurance policy taken out in March 2017. The lawsuit, a copy of which was obtained by the Arkansas Democrat-Gazette, also claims bad faith, deceit and civil conspiracy on the defendants' part.

Williams retired from football on May 8, 2017, after suffering a second neck injury during the Razorbacks' Red-White spring practice on April 29, 2017.

The lawsuit was filed by Bill Horton of Caddell Reynolds of Rogers. Williams is demanding a jury trial and seeking payment of the $1 million policy as well as more than $3 million in punitive damages, court costs, attorneys' fees and statutory damages of 12 percent of the total loss.

"The reason you file these lawsuits is, for one, you paid for a product that was not given to you, which is simply unfair," Horton said.

The lawsuit claims Williams entered into the policy on March 10, 2017, and that Lloyd's amended the policy last May -- after Williams suffered the injury that led to his retirement -- to include an endorsement that would exclude coverage of any injury that arose out of Williams' "spinal column and adjacent and related structures."

The lawsuit alleges Williams was made aware of this "endorsement 3" for the first time on May 9, 2017, by Boeving and was told he could decline the policy within 10 days and have his premiums returned.

Boeving told the Democrat-Gazette on Tuesday afternoon he had no comment about the lawsuit.

Asked whether he was aware of the lawsuit, Boeving said, "I don't have any comment at this time."

At the suggestion of UA officials, Williams sought a permanent disability policy in early 2017 that would protect him financially if he suffered an injury that prevented him from playing football.

Item No. 94 in the lawsuit claims Lloyd's "Intentionally delayed delivering a copy of the March 16, 2017 Policy as long as possible so that if an injury occurred before the Policy was delivered, Lloyds could unilaterally add an endorsement to the Policy to try and eliminate coverage of the injury suffered."

Horton said the Williams family has an audio recording of a voice mail left by Boeving for Williams' father, also named Rawleigh Williams, on the day of his son's second injury. A transcript of the voice mail included in the lawsuit claims Boeving said, "We have got coverage and everything in force, so no issues are on that. I'm just calling to make sure he's all right."

"When we got into the research we found they've done this to other student-athletes, so the other side of this is preventative," he said. "We wanted other student-athletes to know that they can stand up. We hope to correct Lloyd's conduct in the future. If you're going to write these policies, you have to be ready to honor them."

Williams, one of the Razorbacks' top signees during Bret Bielema's five-year tenure, rushed for 1,360 yards in 2016, one season after suffering a severe neck injury in a game against Auburn on Oct. 24, 2015. Williams was carted off the field that day after briefly losing feeling in his extremities and being down on the field for nearly 10 minutes.

He was diagnosed with a herniated disk between the C3 and C4 bones in his upper neck, and the injury was operated on by Dr. James Blankenship, who said the repaired portion of Williams' neck was the strongest on his spine and that it would take a level of trauma beyond football to reinjure it.

After Williams' second injury, team doctors indicated it was not related to the original injury, according to the lawsuit, claiming doctors described the injury as being a disk herniation between the C2 and C3 level with a narrowing of the spinal canal.

After announcing his retirement from football May 8, Williams has since served as a student assistant for the football team while continuing to pursue a finance degree at Arkansas on a medical hardship scholarship.

Williams has been advised by counsel not to discuss the legal action.