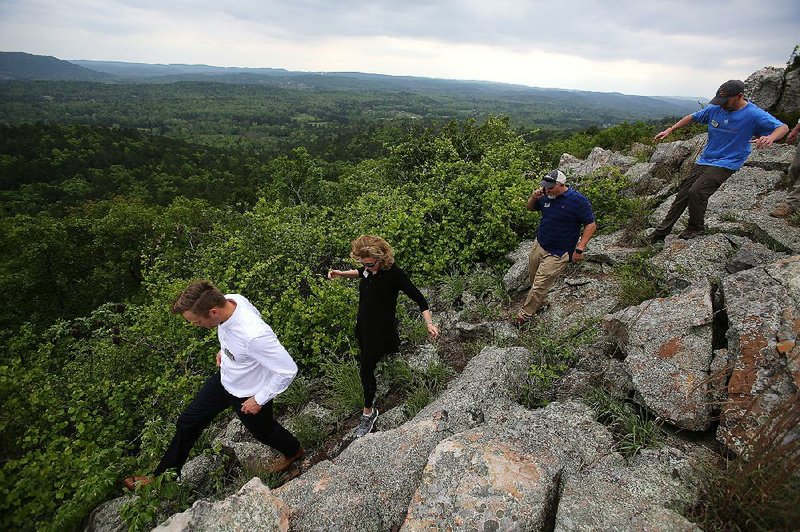 Arkansas Natural Heritage Commission members and guests climb down Wednesday after a dedication ceremony for the Rattlesnake Ridge Natural Area.

A west Pulaski County wilderness known to property owners and trespassers for its rattlesnakes and other breathtaking features is the state's newest natural area, open to the public for the first time.

Rattlesnake Ridge, just off Barrett Road, a few miles down from Pinnacle Mountain State Park, hosts hiking trails, rock climbing and, soon, a mountain-biking trail. The system of trails is not complete, but people can still visit the park. Maps of trails are not yet available at the park's entrance.

The ridge joins other peaks in the eastern edge of the Ouachita Mountains, jutting about 900 feet above sea level. A sign for the park next to its gate entrance shows what visitors might see if they climbed the rocks to the top of the ridge -- something similar to the west summit of Pinnacle: large rocks and shrubbery on a narrow strip overlooking Lake Maumelle and miles and miles of Pulaski County.

The area has been private land until this year, when businessman Lee Bodenhamer sold it to The Nature Conservancy of Arkansas for $3 million. The Conservancy paid for it using a donation from a former graduate school colleague of Bodenhamer's with vast worldwide business investments who wished to remain anonymous.

The 373-acre Rattlesnake Ridge, so named long ago by locals, will be the state's 73rd natural area. The Conservancy asked the Arkansas Natural Heritage Commission to manage it.

Natural areas are created to preserve and protect the best or last-remaining examples of species or habitats, the Department of Arkansas Heritage said.

Arkansas has 72 natural areas dispersed throughout the state, overseen by the commission, a wing of the Arkansas Heritage Department.

Only one other natural area exists in Pulaski County -- the 389.34-acre Lorance Creek Natural Area, a swamp featuring a paved half-mile trail through Pulaski and Saline counties.

Rattlesnake Ridge, not to be confused with a mountain of the same name in Washington state, is home to three species the Natural Heritage Commission considers rare and of "special concern": the Western diamondback rattlesnake, the Southeastern bat and the Wright's Cliffbrake fern.

Bodenhamer spent a year after he first visited Rattlesnake Ridge trying to track down the owner. He had driven up to an overlook with his daughter's fiance, passing a picnicking family along the way, and eventually seeing the views the ridge had to offer.

"That's when I fell in love with this place," Bodenhamer recalled Wednesday.

When he finally found the property owner, "He said 'It's not for sale,'" Bodenhamer said.

About two years later, he saw a "for sale" sign and learned the owner had died. He snatched up the land and some nearby property, eventually amassing 373 acres by 2006.

He lived on the land for a while, as did some children and grandchildren. But at 83, last December, Bodenhamer sold the land to The Nature Conservancy for $3 million, according to county real estate records.

He had been talking with the Conservancy's director, Scott Simon, about making a donation for the Ranch North Woods Preserve when he thought he'd tell Simon he had some other land Simon might be interested in, too.

Simon visited the property and found "spectacular" views from the ridge. Simon took Bodenhamer up on his offer to sell the land and make additional contributions to turn it into a recreational area.

"It's been a fantastic experience for me," Bodenhamer said. "I'll miss it. It's hard to let it go, but I know it's time for someone else to take it over."

A ceremony Wednesday commemorated the opening of the space to the public. Along with Heritage and Conservancy officials, Gov. Asa Hutchinson and outdoors enthusiast U.S. Rep. French Hill, R-Ark., spoke about their excitement to now count the area among the public amenities the state's capital city has to offer.

Hill said it would offer an alternative to nearby Pinnacle Mountain.

Wednesday's announcement drew more than 100 people, many of them employees of the agencies involved. Other spectators were not involved.

"We didn't even know it existed," said Charles Mullins, a member of the Ozark Society. Mullins often hikes the Ouachita Trail and Pinnacle Mountain; he counts himself among Pinnacle's "overusers."

Mullins said he would go explore the trails Wednesday and likely take the Ozark Society's hiking group in the coming months.

He said he was glad officials could use the word "wilderness" Wednesday to describe an area 20 miles from his home in Little Rock. 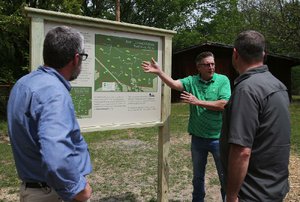 Photo by Thomas Metthe
From the top of the ridge Wednesday, Paul Norris (center) with the Central Arkansas Trail Alliance talks about plans for future trails in the Rattlesnake Ridge Natural Area. 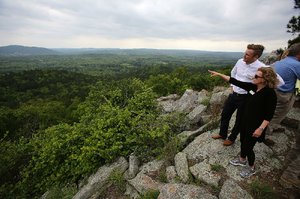 Photo by Thomas Metthe
Arkansas Natural Heritage Commission members Patti Wilkerson and Jeremiah Moore look out over the Rattlesnake Ridge Natural Area west of Pinnacle Mountain on Wednesday. State officials held a dedication ceremony for the 373-acre site, which when complete will include hiking trails and a mountain biking trail. 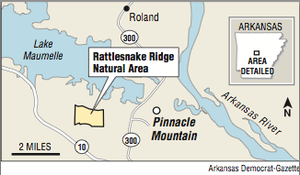