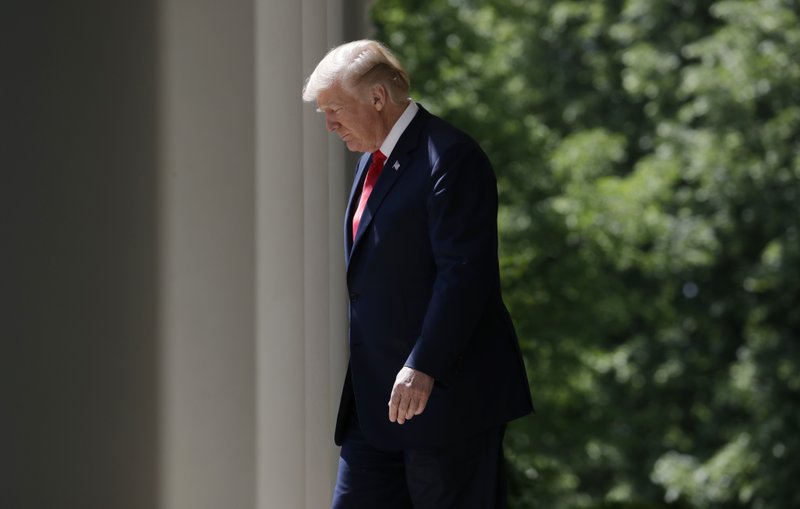 President Donald Trump walks out to speak during a "National Day of Prayer" event in the Rose Garden of the White House, Thursday, May 3, 2018, in Washington. (AP Photo/Evan Vucci)

WASHINGTON -- President Donald Trump celebrated the National Day of Prayer by announcing a White House initiative that he said would underpin policies recognizing the "vital role" of religion in the country. "America is a nation of believers," he said.

Trump tweeted before the faith event that the payments just before the 2016 election "had nothing to do with the campaign."

The president did not address the issue in his public remarks, focusing instead on the power of prayer as a centerpiece of American life.

"Faith has shaped our families, and it's shaped our communities," he said. "It's inspired our commitment to charity and our defense of liberty, and faith has forged the identity and the destiny of this great nation that we all love."

Trump outlined steps by the administration to safeguard religious freedom and pledged to continue doing so.

He signed an executive order creating a "White House Faith and Opportunity Initiative" that will, among other things, make recommendations on policies that affect faith-based and community programs. Trump said the new office will help ensure such groups have "equal access" to government money and the "equal right to exercise their deeply held beliefs."

The ceremony featured prayers from various faith leaders, including Cissie Graham Lynch, the granddaughter of the late evangelist Billy Graham; Cardinal Donald Wuerl, Catholic archbishop of Washington, D.C.; Levi Shemtov, the longtime Washington leader for the Chabad Lubavitch movement; and also the rabbi of the synagogue where Jared Kushner and Ivanka Trump attend services in town.

Members of the First Baptist Church of Sutherland Springs, Texas, where more than two dozen worshippers were killed in a November shooting, attended the event.

Trump said Thursday that he is responsible for people saying "Merry Christmas" more, and talking more openly about prayer. "Don't you notice a big difference between two or three years ago and now? Now it's straight up."

Trump's initiative had some detractors.

Melissa Rogers, who was executive director of the White House Office of Faith-based and Neighborhood Partnerships under former President Barack Obama, said in a statement that protecting religious freedom should be a key goal of the government.

Rabbi Jonah Pesner, who runs the policy-outreach arm for the Reform Movement, the largest segment of American Judaism, said in an email that he has "grave concerns" about the new initiative and its ability to let faith groups play a key role in government programs while also protecting "the rights all people, regardless of their faith. We have already seen efforts by this administration to undermine essential rules ... thereby threatening religious liberty."

As Trump mingled with guests on his way back to the Oval Office, a reporter shouted to the president, "Why are you changing your story on Stormy Daniels?" Someone in the audience shouted back, "Shame on you!"

Information for this article was contributed by Darlene Superville and Ken Thomas of The Associated Press; and by Sarah Pulliam Bailey and Michelle Boorstein of The Washington Post.