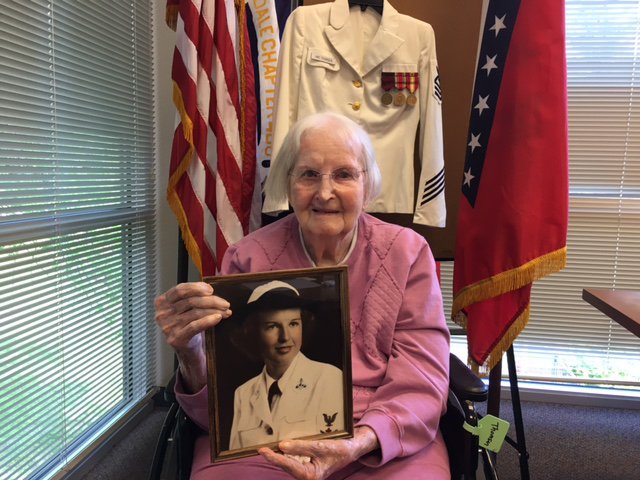 Des Arc native Mabel Thomsen, 101, who joined the Navy in 1944, still has her uniform and medals.

WASHINGTON -- Malik Barnes, a junior at the Arkansas School for Mathematics, Sciences and the Arts in Hot Springs, attended French President Emmanuel Macron's speech before a joint session of Congress.

The 16-year-old junior from West Memphis, one of the students who accompanied the Hot Springs Chamber of Commerce on its annual fly-in, said Macron's April 25 appearance was the trip's highlight.

"It was absolutely phenomenal to sit in the gallery and be able to see all the politicians," he said. "You hear so much about these people and you see them on TV all the time, but to actually see them and how they interact with each other on the House floor is something completely different."

While Barnes had a bird's-eye view of the visit, U.S. Sen. Tom Cotton, R-Ark., was able to observe Macron at eye level.

Cotton, from Dardanelle, attended the arrival ceremony at the White House and was on hand when Macron awarded the Legion of Honor, France's highest military honor, to three U.S. World War II veterans. Cotton also was part of the official escort party that accompanied the French president.

Macron, who has encouraged funding for bilingual education, had no problem communicating with his American audiences.

Cotton wasn't the only Arkansan to welcome Macron to Washington.

U.S. Sen. John Boozman, who serves as the co-chairman of the Senate French Caucus, also served on the escort committee and attended a lunch at the State Department with Macron and other dignitaries, a spokesman said.

Nearly three-quarters of a century after she volunteered for service, a member of the Greatest Generation from Arkansas has shared her story with the Library of Congress.

Des Arc native Mabel Thomsen joined the U.S. Navy in 1944, hoping to join her husband, who was stationed in Hawaii. Instead, she was shipped 5,000 miles east of the islands, to New York.

Boot camp was awful, but her subsequent military service was rewarding, she said.

The war ended in 1945, but Thomsen remained in the hospital corps for two decades, serving across the country.

She met Elvis Presley once at a USO event, she said.

A half-century after leaving the service, her white uniform is still perfectly pressed and bedecked with medals.

Asked whether she would recommend military service to young people, the former chief hospital corpsman said: "Sure would. You've got three meals a day and good food."

Part of the Library of Congress' American Folklife Center, the project focuses on collecting and retaining American veterans' oral histories.

The Washington-based nonprofit works to "identify and invest in women leaders around the world."

Yvonne Quek, a Clinton School graduate and a native of Singapore, will be continuing her McLarty fellowship at the Georgetown Institute for Women, Peace and Security.

McLarty Scholars provides the funding that enables the women to live and work in the nation's capital.

McCall, a graduate of Boston University, is a former newspaper reporter, grant writer and Peace Corps volunteer. She will be working in Tanzania this summer helping to design and implement a "servant leadership curriculum," according to a McLarty Scholars news release.

Giannirakis, a graduate of John Carroll University, was an intern for Legal Aid of Arkansas and the American Bar Association's Commission on Immigration. She has also volunteered at a Cleveland juvenile detention center.

This summer, she will be in Vietnam, "focusing on the protection of the rights of overseas migrant workers," the release stated.

In an email, Skip Rutherford, the Clinton School's dean, praised the latest recipients.

"These new McLarty scholars are outstanding and their futures are limitless. Thanks to the generosity of the McLarty family, these young women will have extraordinary experiences and I am most appreciative," he wrote.