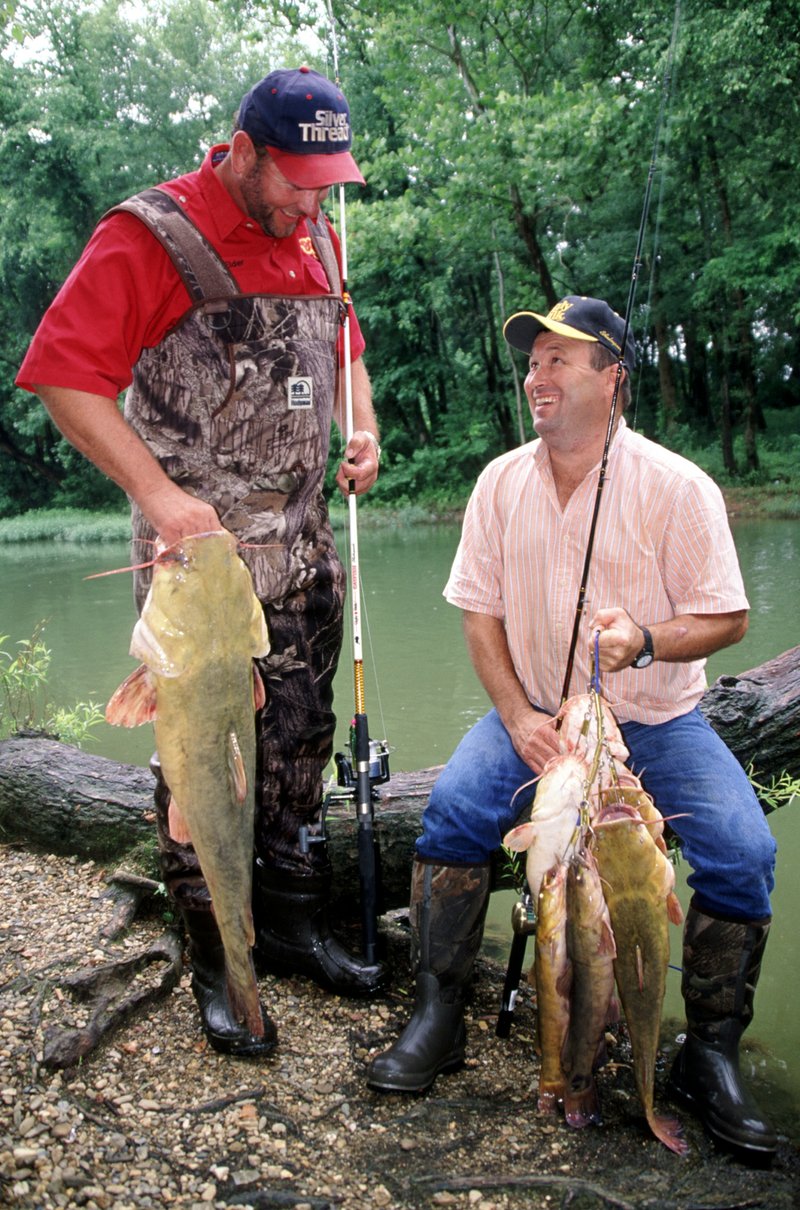 Eating-size cats or trophies? Anglers can take their pick in many of Arkansas’ prime catfishing waters, as Mount Ida anglers Chris Elder, left, and Jimmy Abernathy found out while fishing the Saline River.

I’m starting to get the itch — the catfishing itch, that is. And I’m betting a lot of you are, too. Popularity polls show catfish are the second most popular sport fish in The Natural State (only largemouth bass rank higher), with hundreds of thousands of anglers pursuing catfish throughout the year. With summer almost upon us, those of us who love catching cats will be looking for some honeyholes where we can hook some of these sporty, good-eating whiskerfish.

Fortunately, there are scores of phenomenal fisheries from which to choose in Arkansas. Except for our cold tailrace trout streams, nearly every body of water in the state has healthy populations of blue cats, channel cats and/or flatheads.

The question is, which of these many waters are most worthy of our attention when it’s big cats we hope to hook? Here are some of them.

Because of their large sizes, the state’s 16 U.S. Army Corps of Engineers impoundments all have the potential to produce giant catfish, and most of them do on a fairly regular basis.

Millwood Lake near Ashdown in the state’s southwest corner is among the most consistent producers of big flatheads, which thrive in this shallow, timber-filled environment, and several years back, the Little River below the lake produced a 100-pound-plus blue cat.

Lake Ouachita west of Hot Springs gave up the current 38-pound record channel cat, and there’s little doubt the lake could harbor even bigger ones. This 40,000-acre reservoir may also be the most overlooked body of water in the state for trophy-class blue cats, which frequently exceed 50 pounds. In recent years, there have been rumors of 100-pounders being caught there.

Lakes Ozark and Dardanelle, two Arkansas River impoundments in west-central Arkansas, both have produced record blues and flatheads, and the trophy potential of these waters is highly underrated. There’s little doubt that enormous fish of both species swim these waters, and sooner or later, some savvy catfish fan is going to put a 100-pound-class fish, maybe even a new world record, on the dry side of a boat.

Lake Conway, the largest Game and Fish lake at 6,700 acres, serves up the best catfishing in this classification. This huge stump-filled body of water ranks high on the list of the nation’s best flathead catfish waters, producing numerous 40-pound-plus fish annually, and you’ll look long and hard to find a lake in Arkansas that harbors such a healthy population of giant channel cats. Blues are here, too, albeit in smaller numbers and sizes.

Lakes Jack Nolen (208 acres) and Horsehead (100 acres) aren’t very big, but catfish fans in west-central Arkansas might want to give either, or both, a try when hoping to catch a mess of eating-size cats. Both are bristling with good numbers of channel catfish averaging 2 to 4 pounds, and some even bigger. Lake Nolen is in Sebastian County near Greenwood. Horsehead is 12 miles northwest of Clarksville in Johnson County.

White Oak Lake near Camden is another channel-cat hot spot, but those you catch here could be 10 to 15 pounds or more, making it a great destination for the trophy angler. It’s been decades since this body of water produced a 22-pound-plus former state record, but channel cats that size and bigger have surfaced here in recent years, increasing speculation that some savvy angler may land a fish bigger than the current 38-pound record from Lake Ouachita.

The big bottomland rivers of the state continue to be the best waters for numbers and size of catfish. At the top of the list is the Mississippi River, perhaps the No. 1 body of water in the U.S. in terms of trophy potential for blue cats. Several 100-pound-plus blues have been taken in recent years, including the 116-pound, 12-ounce former world record caught at West Memphis by Charles Ashley Jr. in August 2001, and 108- and 103-pounders caught at a catfish tournament in Memphis in November 2007. In my humble opinion, it’s only a matter of time before someone catches another world-record blue cat in the Arkansas portion of the river. Giant flatheads also inhabit the Mississippi, and if catching loads of channel cats is your idea of fun, there’s no better place to do it.

Local anglers have said the St. Francis River between Lake City and Marianna has been making a comeback in recent years, and I’ve spoken to anglers who’ve been nabbing some extraordinary flatheads from deep holes in the Cross County portion of the river. Keep an eye on this one.

The Arkansas River is the undisputed queen of Arkansas catfishing waters. No other body of water in The Natural State has produced as many record-book cats, and catfishing continues to be excellent year-round throughout the entire length of the river from Fort Smith to the river’s mouth near Yancopin. The best bets continue to be the tailwater stretches below the dams, especially the tailwater of Ozark-Jeta Taylor Lock and Dam south of Ozark, the tailwater below Dardanelle Lock and Dam near Russellville, the tailwater

below Murray Lock and Dam and the North Little Rock Hydroelectric Plant at Little Rock, and below Wilbur Mills Dam (Dam 2) on the Arkansas’ lower end below Tichnor.

When the gates are open, especially during high-water periods in spring, all these areas have the potential for producing a new state- or world-record flathead or blue, and each of these areas produces astounding numbers of small catfish year after year. A sleeper honeyhole is the stretch immediately below David D. Terry Lock and Dam, where Bruce and Mackey Sayre caught the biggest flathead ever recorded, a 139-pound, 14-ounce fish taken in May 1982.

All the state’s other big bottomland rivers rank high for catting as well. Some you should try include the L’Anguille below Cherry Valley, and the lower Ouachita and Saline, two dark horses in the south-central portion of the state.

And finally, don’t overlook the excellent catfishing potential of the state’s thousands of farm ponds, either. Despite their diminutive sizes, most are well-stocked with channel cats. It’s not unusual to catch a dozen or so weighing 1 to 5 pounds apiece on a good day, or night, of fishing.

Target deeper portions of the ponds during daylight hours, but for the best near-shore action, visit at night when channel cats move to the shallows to gorge on frogs, baitfish and other forage animals. Of course, be sure to ask permission from the pond owner before fishing. Most will allow guests who are courteous, especially if you offer to release the fish you catch or share those you keep after they’re prepared for cooking.

Take your kids when you can, too, as ponds are ideal places for fun times on the water with your family.