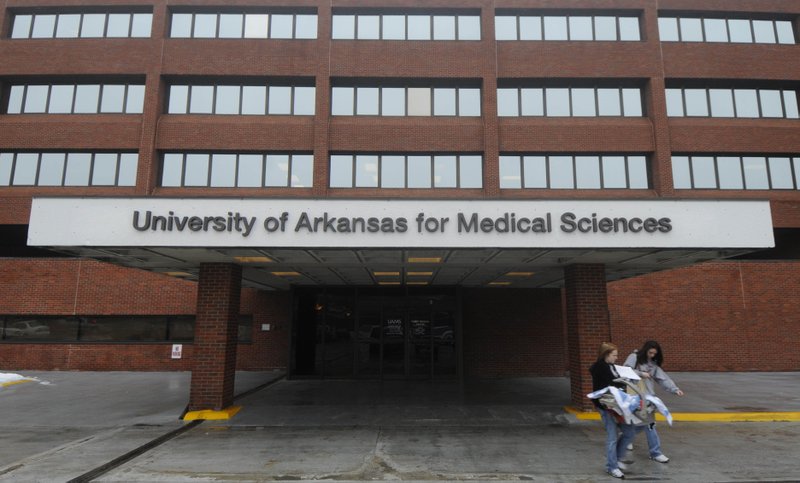 FILE PHOTO &#8212; The University of Arkansas for Medical Science Northwest campus in Fayetteville has 190 students in medicine, pharmacy, nursing and health professions and residents in family medicine, psychiatry and pharmacy. The school is adding 24 students in a physical therapy program.

The physical therapy program at the University of Arkansas for Medical Sciences Northwest Arkansas campus in Fayetteville will give out its first 22 doctorate degrees on today, three years after the inaugural class began.

The program this week also received its national accreditation, which allows its graduates to earn their licenses to practice around the country.

Next will come board exams for the new therapists, then a career. John Jefferson, chairman of the physical therapy department, said 16 of the 22 graduates have accepted jobs, while the others are working on choosing among their offers.

"It's a good job market to graduate into," he said. "Then they'll be helping patients everywhere."

Jefferson said the program takes an unusual approach to instruction. Students watch their "lectures" online at home, then come into class for what might otherwise be called homework: applying what they've learned to various patient situations. Many therapy programs concentrate the classwork at the front end followed by internships at clinics around the area, he said, but the Fayetteville program mixes the two together throughout the three-year course.

The university's style lets students work with patients right away, including at the attached Arkansas Veterans Home and UAMS clinics in the same building. Treating people can be nervewracking for a student, but he and the others got over that fear early on, graduate Scott Van Camp of Springdale said Friday.

The doctor of physical therapy program at the University of Arkansas for Medical Sciences College of Health Professions welcomes 24 students each year who meet several requirements, including the following:

• Have a bachelor’s degree from an accredited school

• Complete 33 hours of prerequisite courses in biology, physiology and other areas

• Complete 60 hours of observation in a physical therapy setting

• Apply by the first Monday in October

Tuition is $10,000 a semester for Arkansas residents, with several scholarships available. More information can be found at healthprofessions.uams.edu/programs/physical-therapy.

"There hasn't been any aspect of it that I've disliked," Van Camp said of physical therapy's many specialties. He's got multiple job offers to pick from and plans to stay in Northwest Arkansas.

Van Camp started out thinking he'd work in orthopedics, like the therapists who helped him with high school sports injuries. Now he's thinking of someday specializing in acute care, such as for injuries or illness, or in home health. He'd also like to get involved with physical therapists professional associations and public policy around the profession.

He came to the program after a decade in the restaurant business, looking for a career that would give him more time for family. Physical therapy seemed like a rewarding and worthwhile choice with good prospects.

The U.S. Bureau of Labor Statistics has projected jobs for physical therapists and other health care providers will grow more quickly than most other professions. Northwest Arkansas physical therapists made an average of $77,000 last year, according to the bureau.

Epley declined to make the donation amount public, but said he was spurred to help create the program when a young student interested in physical therapist said she'd probably go to school in Texas for her training.

"I said, 'Texas?!'" Epley said with a jokingly angry voice, recalling Arkansas's old college sports rivalry with the state. So he researched physical therapy schools and their demands and approached UAMS leaders with the idea of one of their own. But it would have to be in Fayetteville, he said. The doctoral program is UAMS' first not tied to Little Rock.

Epley values physical therapy because it helped him overcome the effects of poliomyelitis, or polio, which attacks the brain and spinal cord and can cause paralysis. Epley came down with polio at the start of his senior year at Springdale High School in 1953, leaving his left arm hanging "like a rope."

He spent several months at a Jacksonville clinic with a physical therapist who helped him regain motion in his arm and snapped him out of a miserable attitude by getting him to focus on the abilities he still had instead of what he'd lost. That therapist, Corrine Wulkan Larson, attended the program's opening and spoke at its commencement dinner Thursday.

In an interview earlier Thursday, Larson said she would urge the graduates to see themselves as part of a team with their patients.

"You're really with them on the long haul," said Larson, who lives in Florida and has worked in physical therapy and public health around the country. A patient knows where he wants to be after therapy, she went on. "You are there to help him get there."

Larson said she suspected UAMS' program could end up as one of the country's best, based on its approach and its progress in three years.

Its accreditation came from the Commission on Accreditation in Physical Therapy Education, which Jefferson said examines all of the program's policies and curriculum and interviews graduating students and the clinics where they interned. All of the clinics said they'd be willing to hire the graduates, he said.

Each class includes 24 students, and Jefferson said they'll stay that size for at least the first five years. Then the school will look at whether it has the resources for more.