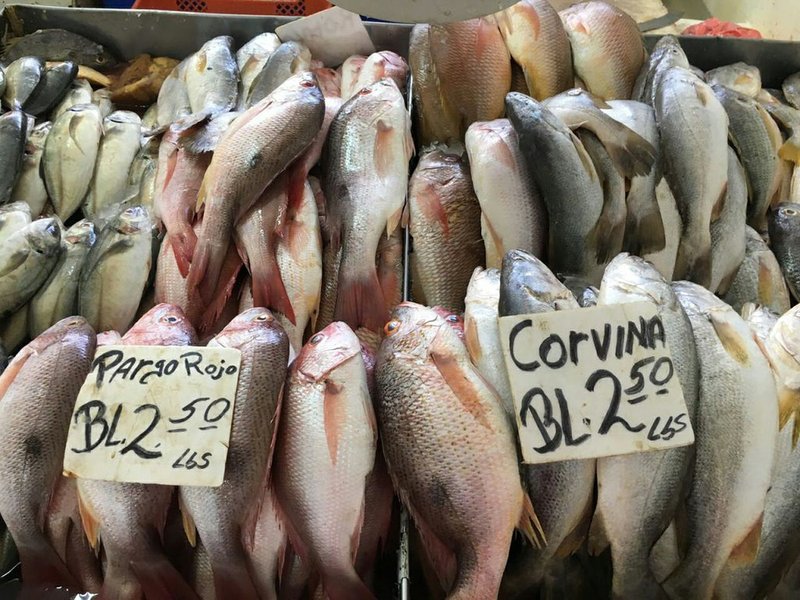 Red snapper and corvina drum at a fish market in Panama.

The bigger a female fish grows, the more eggs she lays -- disproportionately so.

That's the conclusion driven home in a recent report in the journal Science. Biologists at Monash University in Australia and the Smithsonian Tropical Research Institute in Panama gathered egg data from 342 fish species across the world's oceans.

At the extreme end, the vermilion snapper had a 400-fold difference in eggs between the littlest and biggest mother fish. A small female snapper lays about 4,000 eggs. A whopper of a vermilion snapper can deposit eggs by the million, study authors Diego Barneche and Dustin Marshall, colleagues at Monash University, told The Washington Post.

The research is no surprise to field biologists who work with fish. Mark Wuenschel of the National Oceanic and Atmospheric Administration's Northeast Fisheries Science Center, who was not a part of the study, said the size effect was so well known that it has an acronym among researchers: BOFFFF, for big old fat fecund female fish.

But this work is valuable because the importance of such fish is often tough to assess, Wuenschel said, because they are fished out of the population.

In 2017, another team of scientists showed that the fishing industry catches the oldest fish at rates higher than the rest of the population. "You don't even need to be overfishing to get those big old fish to go down," said Trevor Branch, a University of Washington professor and an author of the 2017 report, who was not involved with the new study.

The authors of the new research say it contains an important message for the fishing industry. "Most classic fisheries models don't account for the massively disproportionate contribution that larger fish make, yet these are the first individuals to disappear under even a moderate fishing pressure," Barneche and Marshall wrote in a joint email. "So, fisheries scientists, despite the best of intentions, have been using models that inadvertently recommend overharvesting."

Barneche, Marshall and their colleagues used the example of cod, a commercially important fish. Picture a large Atlantic codfish: Its scales glisten and its chin whiskers are long. Its 66-pound body is swollen with eggs. Nearby is a school of little sisters and cousins. They are pregnant, too. But they are smaller, just 5 pounds each.

When the big fish spawns, its eggs will outnumber the eggs deposited by 28 small fish, the authors of the new study calculated. Put another way, it takes more than 123 pounds of small cod to lay the same number of eggs spawned by one 66-pound fish.

"It's simple physics," said the University of British Columbia's Tony Pitcher, a fisheries scientist not involved with this study. The longer a fish is, the greater the volume of its ovaries (proportional to its length). Bigger ovaries mean more eggs. That's been well known for more than a century, Pitcher said.

Less well known, he said, was the corresponding increase in egg quality. Older females do not simply lay more eggs. Their eggs are richer in fat and bigger in size. Based on the "total energy content" of fish eggs -- the number, volume and nutrients -- a 66-pound mother of cod is equal to even more fish. Not 28, but 37 little cod, per the new study. "All else being equal, more and better eggs means more fish," Marshall said.

If an animal's limb or organ grows out of proportion with the rest of its body, scientists call that allometry. These fish eggs are an extreme example, or "hyperallometry." Fish biologists "have been advocating for this idea for a long time," Barneche and Marshall said in their email, "but our contribution was to show that hyperallometry is the rule, not the exception."

Wuenschel, who noted he is more involved with fish biology than managing fisheries, said maternal effects as described in the paper "have generally been ignored in the past." But as data accumulates, fisheries managers take note. "Many recreational species are managed with slot limits," he said, meaning fish that are either too small or too large must be released.

Some fisheries have started to use egg output as a metric instead of weight, Branch said, particularly on the U.S. West Coast. Because marine-protected areas tend to let fish grow larger, the study authors said that regions of the sea inaccessible to fishing boats could be even more important than predicted.

To Pitcher, the message to fishers was clear: "Don't overfish large old females."