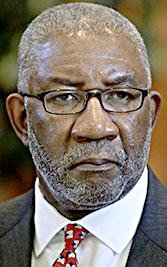 Judge Wendell Griffen is shown in this file photo.

For the second time in just over a week, a judge on Monday ordered the state Department of Human Services to stop using an algorithm to award hours of home-based care to disabled Medicaid recipients.

Pulaski County Circuit Judge Wendell Griffen also ordered attorneys for the department to explain at a hearing on Wednesday why the department should not be held in contempt of court for violating Griffen's order last week that barred it from using the algorithm until it had properly adopted a rule governing its use.

The Human Services Department has used the algorithm since 2016 to award hours of help with daily living tasks, such as dressing and bathing, to participants in the ARChoices program, which serves about 8,800 people.

In a ruling on May 14, Griffen agreed with Jonesboro-based Legal Aid of Arkansas that the department failed to give adequate public notice before it began using the algorithm, which resulted in reductions in hours for many participants.

That order barred the department from using the algorithm until it had been authorized by a rule adopted under the state's Administrative Procedure Act.

The Human Services Department responded by proposing an emergency rule. Under the law, such rules can be enacted without public notice in response to "an imminent peril to the public health, safety or welfare" or to comply with a federal law or regulation.

The rule went into effect Friday after being approved by the Legislative Council. In a court filing the same day, Legal Aid asked Griffen to suspend implementation of the rule and hold the department in contempt of court for violating the May 14 order.

In Monday's ruling, Griffen said the six Medicaid recipients represented by Legal Aid "established that they are likely to prevail on the merits of their claims that the emergency rule does not meet the emergency rulemaking requirements" under the law.

Without his order blocking the rule's implementation, Griffen said, the Medicaid recipients likely would not have a chance to comment on the rule and have their comments considered before their hours were reduced due to the use of the algorithm.

"The judge recognized that there is a strong likelihood that DHS has abused the emergency rule-making process to basically avoid the judge's order that came out last Monday," Legal Aid attorney Kevin De Liban said.

The Human Services Department contended in a court filing last week that it had followed the law in proposing the emergency rule.

Without the rule, it said it does not have an approved method to award hours, meaning it can't conduct annual reassessments of people on the program or add new people to it.

Griffen's ruling Monday "means no new individuals can start the process to gain assistance that helps them remain in their homes," department spokesman Amy Webb said in an email.

De Liban contends that the department could simply allow nurses to use their professional judgment and discretion to award hours as they did before 2016.

Human Services Department officials say that would put the state out of compliance with the federal waiver authorizing the ARChoices program.

Under the state's Administrative Procedure Act, emergency rules can stay in effect for up to 120 days.

Before implementing permanent rules, the law requires agencies to give at least 30 days' public notice and allow public comments.

The Human Services Department plans to publish a notice of a proposed permanent rule governing the algorithm on June 4, Webb has said.

ARChoices replaced the ElderChoices program, which served people age 65 and older, and Alternatives for Adults with Physical Disabilities, which served younger Medicaid recipients.

The algorithm used under ARChoices groups recipients based on their medical diagnoses and answers to questions about their needs.

Most recipients are limited to fewer than 40 hours a week of care, with more hours available to those who meet special criteria, such as being on a machine that helps with breathing or being fed through an intravenous tube.

As of November 2016, one person had qualified for 81 hours, the maximum allowed, and 158 people had been allotted 46 hours, according to Legal Aid. Others who had been assessed had received 37 or fewer hours per week.