Concerns voiced on guns in Arkansas schools; moms, educators get turn in front of commission 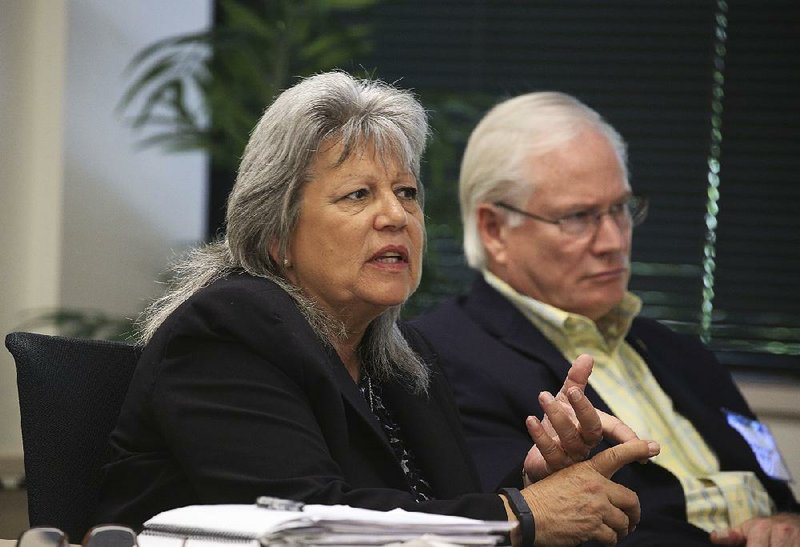 Cheryl May (left), chairman of the Arkansas School Safety Commission, sits Wednesday with Vice Chairman Bill Temple during the panel’s meeting in Little Rock. May is director of the Criminal Justice Institute, a part of the University of Arkansas System. Temple is a retired FBI agent who once ran the Little Rock office.

In turn, commission members questioned the half-dozen speakers -- most of whom were mothers and grandmothers as well as current and former educators -- on what safeguards they want on campuses that do exercise existing state law that allows for armed school staff members.

"This idea that we have to have a good guy with a gun to prevent these incidents is a falsehood," Sarah Quintanar, the mother of two, told the group.

She cited an FBI report on some 160 shooting cases between 2000 and 2013. Only one of those was stopped by an armed bystander, who was a Marine, while 20 others were stopped by unarmed civilians, Quintanar said of the report that was not restricted to school shooters.

The state School Safety Commission, which has routinely invited experts in various safety-related fields to make presentations, devoted part of its Wednesday meeting to interacting with members of the public who had signed up to speak on the issue of school safety -- the only time the commission has conducted such a forum since it began meeting in March.

In addition to hearing from the public, the commission received an explainer of the Positive Behavioral Intervention and Support system that is used nationally and in some Arkansas school districts, including Little Rock and Watson Chapel, to prevent school violence.

That system consists in part of identifying and redirecting the approximately 20 percent of students who tend to misbehave by rewarding them individually for their good behavior and, in the rarer cases, providing other support such as mental-health services.

The 18-member commission of educators, law enforcement officials and mental-health providers, established by Gov. Asa Hutchinson, will generate recommendations on ways to improve student and staff safety in the state's elementary and secondary schools. The preliminary recommendations are due to him July 1 and a final report will be submitted in November.

Hutchinson appointed the group in the aftermath of the Feb. 14 shooting deaths of 17 students and teachers at a Parkland, Fla., high school by one of its former students.

In the weeks since that Parkland shooting, there have been two more cases of school shootings. Ten students and teachers were killed May 18 by a student at Santa Fe High School in Santa Fe, Texas. And then a teacher and student were wounded in a shooting last Friday at a Noblesville, Ind., middle school. The teacher stopped the attack by tackling the suspect, a 13-year-old.

Hutchinson is not alone among governors in seeking ideas for enhanced safety measures. Governors in several states, including Florida, Alabama and Texas, have convened task forces to address school security.

Texas Gov. Greg Abbott, for example, released multiple recommendations on gun safety, mental health and school security measures that would be voluntary. Funding would rely on state and federal grants, he said.

Quintanar appealed to the commission Wednesday to focus on violence prevention rather than arming school staff members and to consider the unintended consequences of arming teachers -- including added teacher job responsibilities and increased insurance costs.

Commission member Don Kaminar, a state Department of Education administrator, asked what controls Quintanar and other speakers would like to see in place in a school that decides to arm some of its staff members. Quintanar said she would likely withdraw her children from public school.

"My main concern is with the accidental shootings that happen if guns are left unsecured. Those things are clearly demonstrated to happen even with the best of intentions," she said.

Parent Katie Mann, who is seeking a master's degree to be a secondary-school science teacher, told the commission that adults must model the behavior that they want children to replicate. While she is supportive of school resource officers, who are armed law enforcement officers on school campuses, Mann said she doesn't want armed school staff members to send the message to students that carrying guns is an answer.

"I would implore you to implore the governor to have more common-sense gun regulations because that is what is actually going to keep our kids safe," Mann said.

In response to questions, Mann called for a more expansive system of background checks for gun buyers, including those who purchase firearms at gun shows; restrictions on the sale of assault rifles; and expanded laws that would allow for guns to be removed from partners in domestic-abuse disputes, be they married or unmarried couples.

Commission member John Allison, a Vilonia teacher, said it didn't appear that the gun violence in schools has stemmed from gun show purchases.

"School safety is the concern of this commission," he said.

"School safety fits into the bigger safety of the community," Mann said. "We need those mental-health background checks."

Darby Wallace, a school librarian, told the commission that she has personally had to shelter students when there was gunfire near her campus.

"I needed information and police," she said. "I needed the resolve to remain calm. A gun would not have helped," she said, adding that an armed teacher might have felt compelled to confront a shooter, thereby revealing the hiding place of children or escalating a situation that needed a calm, level-headed intervention.

Wallace also said that she has witnessed an enraged fourth-grader get hands on a police officer's holstered gun in a situation that was resolved peacefully but could have been tragic.

Speakers Austin Bailey, Donna Drury and Laura Hardy identified themselves as volunteers with the Arkansas chapter of the national Moms Demand Action for Gun Sense in America.

Drury and Hardy, both retired teachers, said they are opposed to asking teachers to carry guns. Drury said that an active, busy teacher can't adequately monitor a gun in a roomful of students.

Washington* County Sheriff Tim Helder, a commission member, told Drury that no teacher would be forced to participate in carrying a weapon. "Is that what you are hearing?" he asked Drury.

Hardy, a former teacher in three urban high schools, said the scariest words she's heard at the commission's meetings are concerns about teachers and students being hurt in "friendly fire." She said teacher badges likely won't be effective in differentiating for law enforcement the armed school employees from a violent shooter in the midst of a rampage.

Bailey, who said she supports the Second Amendment right to own and bear arms, was critical of the governor for not advocating for additional gun regulations to address school shootings.

"You have the power to recommend regulations that will save children's lives, and I hope you do that," Bailey said. "Please don't endanger our children and teachers by recommending that more guns be introduced into our schools."

Andrew Lawson, another speaker, urged the commission to consider the links between nutrition and mental health of students. In addition to including in school meals the nutritional elements for good mental health, Lawson recommended that schools teach students strategies for anger management and emotional processing.

*CORRECTION: Tim Helder is sheriff of Washington County. His county was incorrectly reported in a previous version of this story.