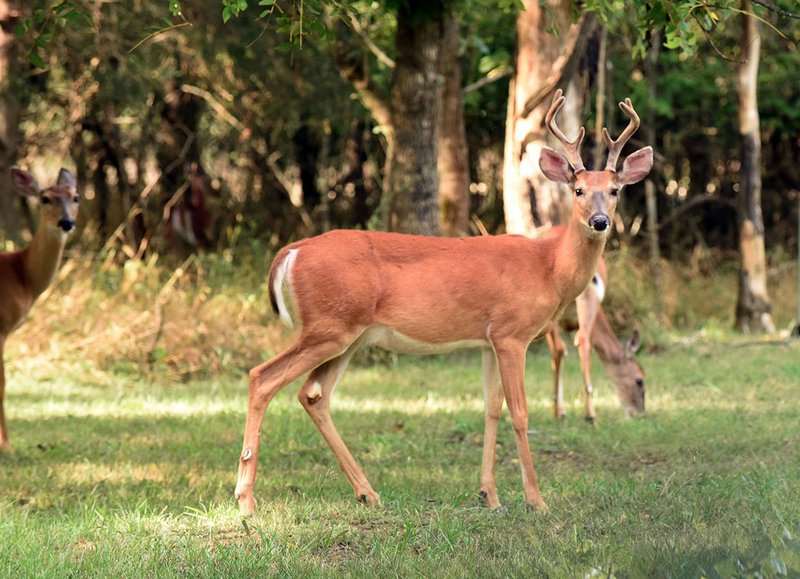 NWA Democrat-Gazette/FLIP PUTTHOFF A buck's antlers are covered in velvet during summer and early fall. The velvet brings food to the antlers as they grow. Bucks rub their antlers on trees to remove the velvet after it dies and dries up.

All factors add up to equal another stellar hunt when modern gun deer season opens at first light on Saturday.

Reports from the field indicate deer are on the move, searching for food and mates in the Ozarks' forests and fields, said Richard Bowen, an avid deer hunter and area wildlife biologist with the Arkansas Game and Fish Commission.

Bowen reports seeing plenty of deer on his hunting adventures since archery deer season opened on Sept. 22. As modern gun season approaches, deer are doing everything hunters hope they'll do.

"I've seen a lot of scrapes and some rubs," Bowen said last week. That means the rut, or deer mating season, has started. That gets bucks moving more than usual as they seek mates.

Bucks paw the ground bare and urinate in it to mark their territory. Rubbing antlers on the trunks of small trees removes any leftover velvet membrane that covers the antlers as they grow through summer and early fall. Rubbing increases as the rut nears and bucks compete for does.

The rut is just starting, and Bowen thinks it will peak the first part of gun season.

Bucks and does are also on the move more than usual looking for food. Acorns are like bacon to deer. They're the favorite food of deer in the Ozarks. This year's acorn crop is "decent to low," Bowen said.

That's good news for hunters because deer will roam more to find food. In seasons when there are lots of acorns, deer don't wander as much, and hunters are less likely to see them.

Deer graze on grass and leafy vegetation, too. Lance Lewsader, who hunts on private land west of Bentonville, said there's still plenty of greenery for deer to eat.

Lewsader shot a good-sized doe in October during the private-land antlerless deer season. The deer field dressed at 125 pounds. That's big for an Ozarks' deer.

The hunter has several tree stands in place. "There's one we call the sweet spot that gets a lot of deer traffic."

That's where Lewsader and his 9-year-old daughter, Maddison, will be on opening day. Maddison has already spotted the deer she wants to shoot, her dad said.

Summer was a good one for people and deer. "Not too hot. Not overly wet." Lewsader said. "The deer I'm seeing appear very healthy."

Arkansas' white-tail harvest has been just moer than 200,000 deer for six consecutive seasons. The total is for archery, muzzle-loader and modern gun combined. Modern gun accounts for most of it, and many of those deer are killed on opening weekend.

Chronic wasting disease entered Arkansas' deer hunting picture when it turned up in the state in 2016. Lewsader said he doesn't think much about the disease because it's rare in Benton and Washington counties, with five cases total for the two counties, according to a map on the Game and Fish Web site.

Still, Game and Fish recommends hunters get their deer tested for the disease. Testing is free. Game and Fish will operate testing sites on Saturday and Sunday in Benton, Washington, Crawford, Sebastian and Franklin counties.

Payton Usrey, owner of Payton's Taxidermy in Springdale, is on the list. Usrey said hunters brought about 100 deer to him for testing last deer season.

The hunter will receive a number used to check test results online at agfc.com/cwd. A hunter will only hear back if their deer tests positive for chronic wasting disease, usually within two weeks, he said.

Bowen said samples are currently tested in labs out of state. Game and Fish is working on its own testing lab in state. It could be ready to test deer next season, he said.