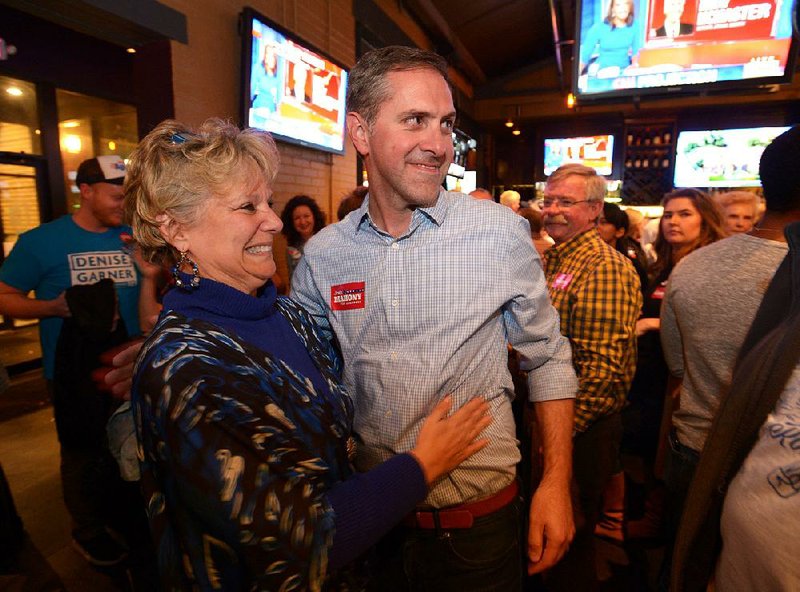 Denise Garner, the winner of the House District 84 race, gets a hug Tuesday from Greg Leding, who was elected to the state Senate’s District 4 seat, during a watch party at Farrell’s Lounge in Fayetteville. Garner defeated incumbent Republican Rep. Charlie Collins. ( NWA Democrat-Gazette / Andy Shupe)

There were several hotly contested races in the Arkansas House of Representatives.

With all 29 precincts reporting, unofficial returns were:

Collins championed a 2017 state law that allows people to carry guns on state college campuses and into some other public places if they have a concealed-carry permit and take extra training.

But many in higher education objected to the bill that became Act 562 of 2017.

"At every meet-and-greet I go to, the first thing that comes up is guns," Garner said. "The real issue is that Charlie didn't listen, not to faculty or staff, students or parents or the campus police."

On any issue, she said, Collins has an opinion of his own and sticks to it.

Collins said his record is a wide, varied and influential one that benefits residents of his district in particular and Arkansas in general.

"I don't just flap my gums and make promises," Collins said. "On taxation, education, regulation and litigation I've reduced barriers for my constituents and their children to succeed."

Collins said his record goes beyond the gun bill.

"Obviously, it was a significant issue but I don't know why people made the choice they made, whether it was one thing or more than that," Collins said. "I introduced a gun bill in every session -- in 2011, '13, '15 and '17 and it passed in '17. I would just congratulate my opponent on running a very strong race."

Located within Washington County, House District 84 includes parts of Fayetteville but not the University of Arkansas, Fayetteville, campus.

In central Arkansas, Republican Rep. Karilyn Brown of Sherwood had the lead over Jonathan Crossley, a Jacksonville Democrat in District 41. She has held the seat for four years.

Results were just trickling in by 10:30 p.m., but Brown said her workers had been to the polling places, so she knew she had won.

"I'm really thrilled. I think it's very important to keep the momentum going for the good things we've done in Arkansas," she said. "I'm proud to be a part of that. I'm really thankful for all of the support I have received. This election isn't about me. It's about the people in this district, and I'm really happy for us."

Because of the district's suburban characteristics and Crossley's resume and enthusiasm, Democrats viewed the district as one of their best opportunities in 2018 to flip a legislative seat.

Crossley moved to Palestine, a town in eastern Arkansas, in 2010 to teach high school English as part of the Teach for America program. Three years later, he was named Arkansas' Teacher of the Year and given an advisory position on the state Board of Education. He later moved to Jacksonville to become the principal at Little Rock's Baseline Academy elementary school, a position he resigned from earlier this year to focus on his campaign.

Brown said she has worked various careers, including as a technical writer and scientific researcher, and in various state agencies. She served on the Pulaski County Quorum Court before being elected to the House in 2014.

In House District 41, with 11 out of 11 precincts reporting, unofficial returns were:

This summer, Gates was charged with failure to pay state income taxes for the past six years. He owes the state $259,842 in income tax, penalties and interest, according to the charging document filed July 2 in Garland County Circuit Court. Gates, who has served in the House since 2015, pleaded innocent. The case is pending.

In House District 22, with 16 out of 23 precincts reporting, unofficial returns were:

In House District 42, with 12 out of 12 precincts reporting, unofficial returns were:

In the southeast corner of Arkansas, House District 11 borders Mississippi and Louisiana.

It was there that state Rep. Mark McElroy of Tillar, a former Democrat turned independent, faced two challengers in his re-election bid -- a Democrat and a Republican.

McElroy switched parties during candidate filing this year after another Democrat, former Circuit Judge Don Glover of Dermott, announced his bid for House District 11. The Republican candidate is Ricky Lattimore of McGehee, who is pastor of Tabernacle Baptist Church in Dermott.

"I will be the first black or white Republican to win in this area," Lattimore said.

But early results showed him trailing the Democrat.

In House District 11, with 26 out of 46 precincts reporting, unofficial returns were:

Gray had previously predicted his party had a chance to pick up two or three seats in the House.

In House District 47, with 64 out of 71 precincts reporting, unofficial returns were:

Baltz defeated Davis by 563 votes in 2016. Baltz is the only Democrat to represent north-central Arkansas in the House. He's a farmer and retired Pocahontas fire chief.

In House District 61, with 30 out of 31 precincts reporting, unofficial returns were:

Bismarck Democrat Alan Hughes had a large volunteer base in his bid to oust Republican Rep. Laurie Rushing of Hot Springs, though Rushing had a wide lead Tuesday night.

In House District 26, with 20 out of 21 precincts reporting, unofficial returns were:

Going into Tuesday's election, Republicans held 75 of the state House's 100 seats. Democrats held 23. An independent held one seat, and another seat was vacant.

State Republican Party Chairman Doyle Webb of Benton had predicted Republicans would have 76 seats in the House after Tuesday's election.

"The faces may be different making up those numbers than they are now, which means we could lose some and pick up some," he said.