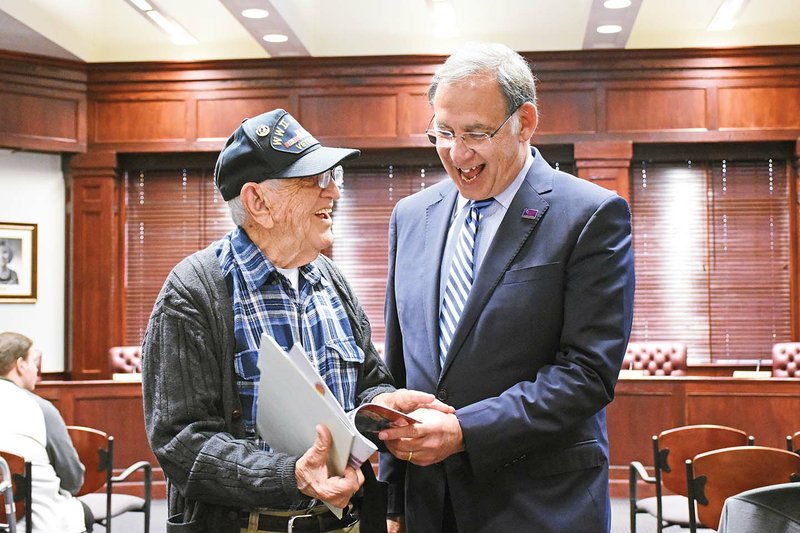 They visited the University of Central Arkansas and the Arkansas Educational Television Network to talk about the project and to thank those who are, and have been, involved in collecting and preserving veterans’ histories.

“Thank you for all you do for veterans,” Boozman told those gathered in the UCA boardroom at Wingo Hall.

“My dad spent 20-plus years in the Air Force and retired as a master sergeant. I love to see our World War II guys. … You remind me of him. Growing up in a military family, I quickly learned when dad said to do something, you did it,” Boozman said.

“We are very blessed to have this college involved in the Veterans History Project. You’re doing a great job with it,” he said.

“Preserving the experiences of our veterans is an honorable way to recognize their bravery and dedication to our country,” Boozman said. “I’m proud of the memories we’ve collected and shared with the Veterans History Project and the ongoing efforts to educate others across Arkansas about this initiative. It’s great to see the enthusiasm of so many organizations, schools and individuals who are helping contribute to this project, and I encourage others to get involved, too. I’m pleased that Director Lloyd has the opportunity to visit our state and see the tremendous support.”

Lloyd said this was her second visit to Arkansas. She first came to the northwestern part of the state last year to meet with Anita Deason, military and Veterans Affairs liaison in Boozman’s Little Rock office.

“Thank you for the work you are doing in your community, for reaching out to the veterans,” said Lloyd, who served 28 years in the Air Force.

“I would say to you today, there are veterans still hidden in plain sight. Go out and find them. We count on you to collect these stories and send them to us. There are 239,000 veterans in Arkansas. This is a target-rich environment. Reach out and find those veterans,” Lloyd said.

“It is important to have this community link to history. It’s telling the stories of ordinary people who do extraordinary things for their country. It’s good to preserve these stories … good for the family … good for the young people to learn about our history. We need to remember this history,” she said.

“I am a veteran,” said Lloyd, who was commissioned as a Medical Service Corps officer in 1976 upon graduating as a Distinguished Military Graduate from Indiana University. She served 14 years as an Army aviator and was the first female MSC officer to receive aviator wings. In 1986, Lloyd transferred to the aviation branch and commanded the Grafenwoehr Army Airfield and Flight Detachment in Germany. She served 14 years as a comptroller in a variety of positions and retired as a colonel in 2004.

“I also live with a veteran,” she said. “I am a child of a veteran and a sibling of a veteran. I get it.

“I am living the dream.”

Among those in the audience at UCA were four residents from College Square Retirement Community in Conway — three veterans and one woman who did her part to support the war effort during World War II.

Margie Wilson, 93, was a welder at the shipyard in Portland, Oregon. She has lived at College Square for about six months.

James Hudson, 85, served 20 years in the Air Force, including three overseas tours — Newfoundland, Germany and Vietnam. He retired as a lieutenant colonel in 1973. He has already been interviewed for the Veterans History

Project, where he revealed that he flew 224 missions in Vietnam and received the Distinguished Flying Cross for one of those missions.

“The Veterans History Project is a good project,” he said, adding that Deason interviewed him for the project. Hudson has lived at College Square for 1 1/2 years.

Floyd Brantley, 93, was interviewed for the Veterans History Project by Deason in 2016. Brantley has lived at College Square four years.

James Oliver, 91, was born in Booneville, where he was drafted during World War II. He served about six years with the Army in the South Pacific. He has lived at College Square for about four months and has not participated in the Veterans History Project.

Deason said that during her and Boozman’s visit to AETN, he did a short video clip for an upcoming series of “digital shorts that will be focused on post-9/11 veterans.”

“It is part of a series titled Veterans Coming Home,” she said.

“AETN also turned in 37 interviews they have collected for the Veterans History Project,” she said. “We are now working on a way to place about 600 interviews of World War II veterans they did several years ago into the Library of Congress.”

Deason said representatives from AETN will join others at a veterans appreciation event from 10 a.m. to

2 p.m. Monday at the MacArthur Museum of Military History in Little Rock. The digital shorts produced by AETN for Veterans Coming Home will be screened during the event, which is open to the public.

“This entire trip was just a way for the senator and the director to say thank you to all the veterans and those who have worked on the Veterans History Project,” Deason said. “It was a whirlwind trip for all of us, but well worth it.”

For more information about local involvement with the Veterans History Project or other military or veterans issues, visit Boozman’s Facebook page or call his Little Rock office at (501) 372-7253.

Congress created the Veterans History Project in 2000 to collect, preserve and make accessible the firsthand

remembrances of America’s war veterans from World War I through the current conflicts, so that future generations may hear directly from veterans and better understand the realities of war. More information is available online at www.loc.gov/vets or by calling the toll-free message line at (888) 371-5848.