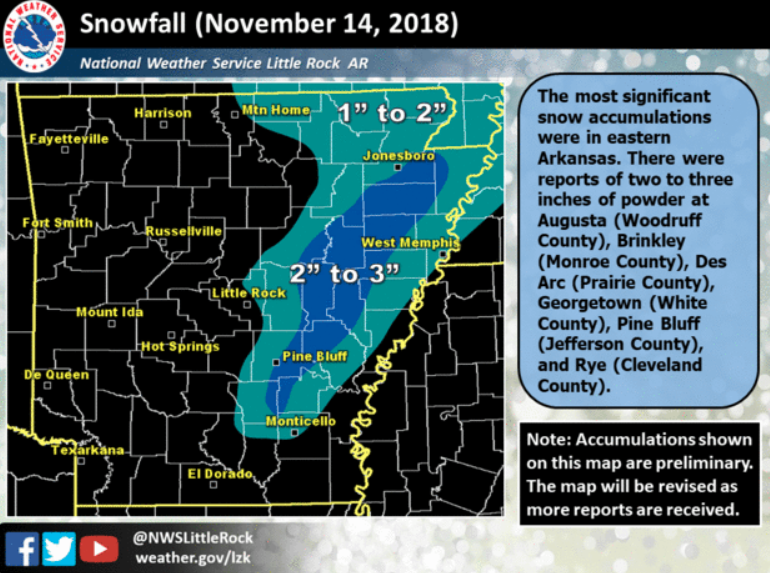 This National Weather Service graphic details snowfall accumulations in Arkansas from a storm that moved through Wednesday into Thursday.

In one crash that happened shortly before 6:30 p.m. on Cantrell Road near Interstate 430, a 1999 Chevrolet hit a patch of ice, crossed into opposing traffic and collided with a 2016 Mazda, Arkansas State Police reported. The Mazda driver, 26-year-old Quinten Young of Little Rock, died at the hospital, and the Chevrolet driver, 49-year-old Jack Winover of Little Rock, was injured.

Little Rock police reported another fatal crash because of weather conditions at 6:25 p.m. at 11900 Stagecoach Road, spokesman Lt. Michael Ford said. The identity of the victim had not yet been released, and no further details were available.

Shortly after 9:45 p.m., a 1999 Honda hit a patch of ice on U.S. 67/167 in Jacksonville and veered off the highway and into a tree, state police reported. The driver, whose name wasn't listed on a preliminary report, and a passenger, 56-year-old Mearlon Noah of Cabot, were both killed.

On Thursday morning, the Arkansas Department of Transportation reported slush and ice patches on highways, particularly in the state's northeast. But by midday, temperatures in the state had risen above freezing and all major highways were reported clear of wintry precipitation.

Traffic was slow around the Little Rock metro area on Thursday morning and along Interstate 40 in eastern Arkansas. Overnight, lengthy delays were reported on I-40 in North Little Rock and near the White River bridge, where icy conditions contributed to multiple wrecks.

Some drivers on the highway were stranded for hours. Officials said traffic was slow-going even after the wrecks were cleared because some drivers had fallen asleep.

Ice patches and slush were reported on a number of highways north and east of Little Rock on Thursday, and the National Weather Service urged motorists to be cautious because of possible black ice on roads.

A system dropped up to 2 inches of snow on parts of Arkansas Wednesday into Thursday, prompting some schools to cancel or delay class on Thursday and causing travel problems. Multiple wrecks were reported overnight on Interstate 40 in North Little Rock and near the White River, the Arkansas Department of Transportation reported, and that caused hours-long delays while crews treated the highway and cleared the scene. It wasn't immediately clear if any injuries were reported.

By 6 a.m. Thursday, the Arkansas Online traffic map showed delays on Interstate 30 near Interstate 530, but traffic moving slowly on most other major highways. The state Department of Transportation map, meanwhile, showed slick areas on a number of highways, including ice patches on U.S. 67/167 from North Little Rock to Jacksonville.

In a statement, the weather service said far northeast Arkansas may see additional snowfall early Thursday, but no more accumulation is expected. But it warned of potentially hazardous roads.

"Temperatures remain below freezing across all of the area this morning," the statement said. "Some areas will still see some hazardous driving conditions as a result of light snow and black ice from when the snow melted on Wednesday afternoon/evening. The areas most prone to seeing slick spots will be bridges and overpasses. Motorists are urged to use caution when traveling, especially for this morning's commute."

The highs later Thursday are expected to exceed the freezing mark.

Advisory: Beware of ice that forms overnight. Black Ice is hard to see and can be very dangerous. Use caution and check highway conditions at https://t.co/l1xGNNTado. #artraffic pic.twitter.com/H4JymnJAha

Information for this article was contributed by Jaime Dunaway of the Arkansas Democrat-Gazette.