FDA to target underage tobacco use in new effort 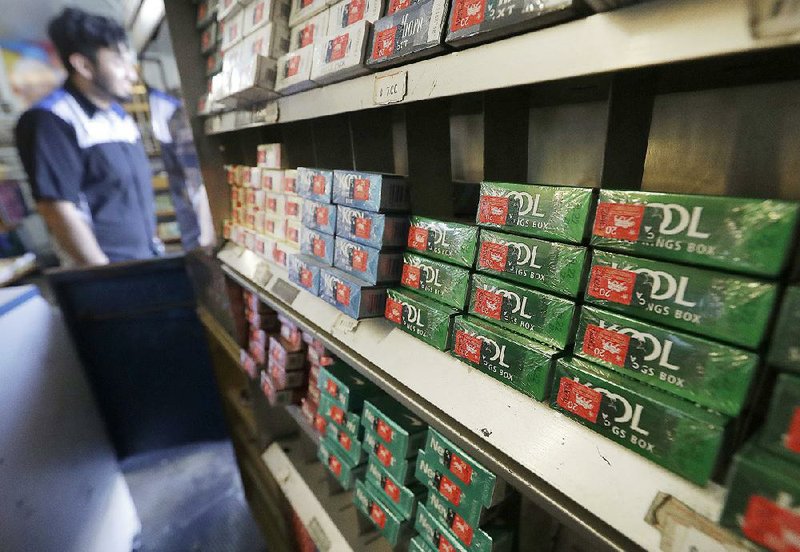 Packs of menthol cigarettes and other tobacco products line shelves at a store in San Francisco in May.

WASHINGTON -- The Food and Drug Administration on Thursday launched a multipronged attack on the rising underage use of tobacco products, imposing sharp sales restrictions on flavored e-cigarettes and announcing plans to ban menthol cigarettes and flavored cigars.

The FDA says it will limit sales of many flavored e-cigarettes to bricks-and-mortar outlets that have either age-restricted entry or areas inside stores that are not accessible to people under 18. Such restrictions are tantamount to a ban for many convenience stores and gas stations but not for specialty vape and tobacco stores, said a top agency official. The FDA also will require stepped-up age verification for online sales.

The new limits reflect health experts' concerns that e-cigarette use could lead to nicotine addiction early in life and affect the developing adolescent brain and that some e-cigarette users will go on to smoke more dangerous regular cigarettes.

Perhaps even more significant than the e-cigarette steps are the FDA's commitments to propose bans on menthol in cigarettes and cigars, as well as other flavors in cigars. Such prohibitions will require new regulations that could take years to go into effect, and could be derailed by opposition from the cigarette industry.

Menthol cigarettes, which contain a minty compound that reduces the harshness of smoke and suppresses coughing, were widely marketed starting in the 1950s and 1960s.

The restrictions do not affect mint, menthol and tobacco flavored e-cigarette products.

The tobacco blueprint was released by FDA Commissioner Scott Gottlieb as the government published new data showing a surge in e-cigarette use among minors. The 2018 National Youth Tobacco Survey, by the FDA and the Centers for Disease Control and Prevention, found that vaping had increased 78 percent among high school students since last year and almost 48 percent among middle schoolers; 3.6 million youngsters reported vaping at least once in the previous 30 days.

"The bottom line is this: I will not allow a generation of children to become addicted to nicotine through e-cigarettes," Gottlieb said in a statement. "We won't let this pool of kids, a pool of future potential smokers, to continue to build."

Gottlieb called on companies to remove the affected products within 90 days from stores that children can enter and from online sites that don't have adequate age-verification procedures.

The FDA's moves on menthol cigarettes and flavored cigars drew widespread praise even before they were officially announced. Its actions on e-cigarettes were more controversial. Public health experts called them a start but said they were not a comprehensive solution to the problem, while vaping advocates said they would hurt adult smokers using e-cigarettes to quit.

Some critics raised the possibility that the agency could face a lawsuit by trying, in effect, to limit vaping product sales to certain types of stores.

"I don't think they know where the law allows the FDA to ban hundreds of thousands of stores from selling a legal product," said Lyle Beckwith, senior vice president of the National Association of Convenience Stores.

On the menthol issue, the 2009 tobacco-control act banned all flavors in traditional cigarettes except menthol; that was left for the FDA to tackle. But the agency never sought to bar menthol cigarettes, which over the years have been marketed heavily to black smokers.

In a statement circulated upon news of the ban, the NAACP, National Urban League, the National Medical Association and the African American Tobacco Control Leadership Council said a menthol ban is long overdue.

"While we're saddened by the number of lives lost and new smokers addicted over the past decade, we're pleased that the FDA is moving in this direction," said Delmonte Jefferson, executive director of the National African American Tobacco Prevention Network. The group also praised the agency for taking on flavored cigars.

Gottlieb, in pursuing his tobacco strategy, is taking some flak from fellow conservatives. "The administration promised less regulation -- without sacrificing protections," said Jeff Stier, a senior fellow at the Consumer Choice Center. "So if the FDA fails to meet both objectives -- by announcing a heavy-handed regulatory plan -- President [Donald] Trump should realize that the current leadership at the FDA is not equipped to implement the administration's policy agenda."

The FDA's e-cigarette crackdown already has had an impact. Juul Labs, which accounts for more than 70 percent of e-cigarette retail sales and has been blamed by the FDA for much of the rise in underage use, announced this week that it would stop selling most of its flavored e-cigarette pods -- specifically, mango, fruit, creme and cucumber -- in 90,000 retail outlets, and enhance its online protections. The company also said it would halt its social media promotions of the products. And Altria said late last month it would stop selling its pod-based flavored e-cigarettes for now.

Information for this article was contributed by Laurie McGinley of The Washington Post, by Sheila Kaplan and Jan Hoffman of The New York Times and by Mike Stobbe of The Associated Press.