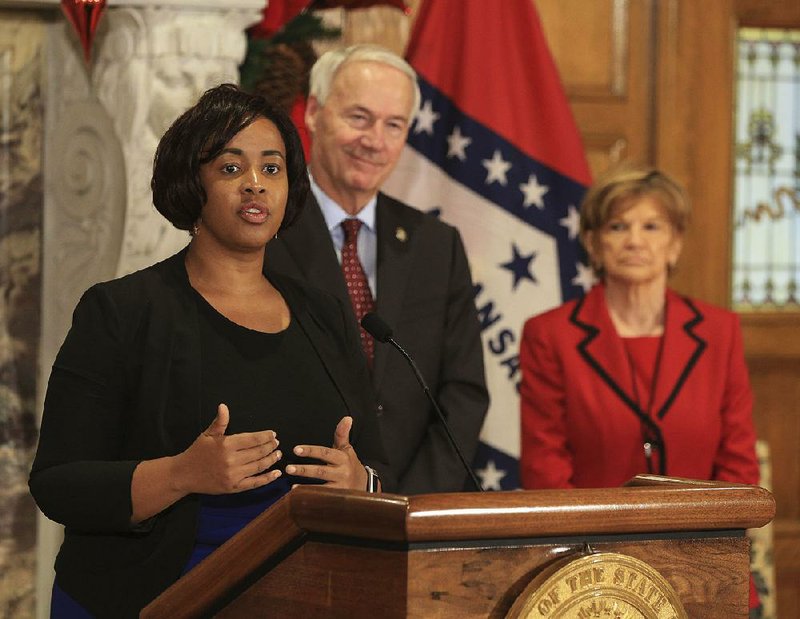 The state plans to close two of its seven youth jails and change how children are sentenced and treated after they're convicted, Gov. Asa Hutchinson announced Friday.

The overall goal is to cut youth incarceration, Hutchinson said. Over time, funds that would cover the cost of locking up children can go to therapeutic group homes, psychiatric and substance-abuse programs, community-based services, and diversion efforts that direct children away from formal processing in juvenile courts while still holding them accountable, he said.

The state's lockups house as many as 200 adjudicated youths.

Juvenile-treatment centers in Colt and Dermott would be closed no later than July, according to the Arkansas Youth Services Division's "Transformation Plan," which was released at the Capitol moments before the governor began his remarks.

The youth agency's plan also outlines the state's intent to return the remaining lockups to private control next year.

Hutchinson described the plan as a "monumental first step forward" for Arkansas' troubled juvenile-justice system. It's only the first of several series of actions coming, he said.

Some changes will require legislative review, but most can be completed by changing state agency procedures, he said.

"The state is taking real action to address long-standing concerns and to fundamentally shift so that youth get individualized quality treatment in the least restrictive setting," the governor added.

For years, advocacy organizations and federal investigators found that abuse and neglect occurred at the youth jails and continually recommended changes. Public defenders also have expressed concerns about how much time children spent behind bars.

Tom Masseau, director of Disability Rights Arkansas, a watchdog group with federal monitoring authority, described the plan as a "first step towards transforming the juvenile justice system in Arkansas to a more community-based system rather than a punitive system."

Disability Rights has monitored the treatment centers for more than five years. Throughout that time, the agency cited concerns regarding staff members' failure to provide adequate behavioral health treatment and education, as well as poor facility conditions.

Masseau also said the nonprofit is committed to holding the governor and the youth services agency "accountable to their promises" and that it "will continue to advocate for the rights of the youth in the state."

The Youth Services Division's plan will change how kids are sentenced, likely reducing how long they're incarcerated.

Research shows that children do better when they spend less time in secure facilities and that being jailed causes further trauma.

In Arkansas, almost all adjudicated youths are sent to county-run juvenile-detention centers first to await assessment by the youth services agency, which happens at the Arkansas Juvenile Assessment and Treatment Center in Alexander. They can be held up to three months at these county facilities, where mental-health, substance-abuse and therapeutic services are limited or not available at all.

After assessment at the Alexander site, children are then transferred to one of the state's treatment centers, where the clock for "time served" begins. This current system is an improvement from past policy, in which children would undergo assessment after waiting for months in the county youth jail just to return to the county facility to wait for space at a treatment center, according to Betty Guhman, Youth Services Division director.

The agency's plan says children will now go straight to Alexander for assessment after a judge commits them.

After the news conference, Guhman acknowledged that changes in sentencing procedures won't go over well with certain counties. The agency "has already gotten push-back on this," she said.

The state gives counties money when children committed to the Youth Services Division are housed at their detention centers to await assessment.

"We're not going to underwrite some county with a big facility," Guhman said. "They need to work to come up with other ways to use that bed."

Guhman said the governor is focused on sending funding from saved incarceration costs to diversion efforts, such as emergency shelters.

Benton County, for example, slashed its juvenile-detention center's admissions rate and is now using the extra space in its facility to build a shelter for boys. Pulaski County is considering similar changes.

Keesa Smith, Department of Human Services deputy director, provided additional details about returning the lockups to private control in an interview after the news conference.

The department took over management of the treatment centers in December 2016 after a contentious bid process that began that August when the agency tried to award a $160 million contract to an Indiana firm called Youth Opportunities Investment LLC. The new contract would have increased the daily per-bed rate from $147 to about $232.

Two nonprofits, South Arkansas Youth Services of Magnolia and Consolidated Youth Services of Jonesboro, were managing the lockups at the time, and had been for more than two decades. They protested the state's decision, arguing that the change resulted from an unfair bid process or a "rigged system," according to letters filed by their attorneys.

In the following months, their challenge triggered legal filings, letters and memos involving state agencies and the groups that wanted the contract.

After members of the Arkansas Legislative Council rejected the Youth Opportunities contract twice by declining a review, Hutchinson announced that the Human Services Department would take over all seven facilities.

The governor criticized lawmakers for "killing the procurement process" and positioning the state for a "government shutdown."

Since the bidding skirmish, Jerry Walsh, executive director of the now-shuttered South Arkansas Youth Services, has pleaded guilty in federal court to funneling more than $380,000 of the agency's money to lobbyist Milton "Rusty" Cranford, with the goal of preserving the agency's state contracts. Cranford has also pleaded guilty to federal bribery charges in a separate case.

Now, after nearly two years in charge of the lockups, the Human Services Department expects to release next week a draft request-for-proposals to run the five remaining facilities, Smith said.

Interested parties will have time to review the proposal and offer comments, and a formal invitation to bid will be released in early December.

The amount of the new proposal has not been determined, but it'll be about the same amount as the previous bid, added Cindy Gillespie, the department's director.

'MUCH TO BE DONE'

As the Youth Services Division implements its "Transformation Plan," youth advocates say they hope to present a separate proposal to lawmakers in the coming months that aims to improve how children are treated in the system.

Their proposal aims to cut back on incarceration at juvenile-treatment centers by requiring court staff members to formally assess all children before sentencing and to stop the jailing of children for low-risk misdemeanor offenses.

That effort is led by members of the joint panel of the legislatively empowered Youth Justice Reform Board and the Arkansas Supreme Court's Commission on Children, Youth and Families.

"Studies show these kids don't need to be locked up. This will help us focus on tougher cases," said Faulkner County Circuit Judge Troy Braswell, who leads the reform board. "The kids with higher risk, higher need. That's a good thing."

Rich Huddleston, executive director of Arkansas Advocates for Children and Families, said he is optimistic about progress taking place, especially considering the efforts of the combined reform board and commission and the governor's announcement.

"There is still much work to be done in the 2019 legislative session," Huddleston said. "But it's clear that Arkansas is charting a new path for long-overdue reform of the juvenile justice system. Today's announcement provides hope that true reform and better outcomes for children in Division of Youth Services care are finally within our reach."