Exchange for a buck 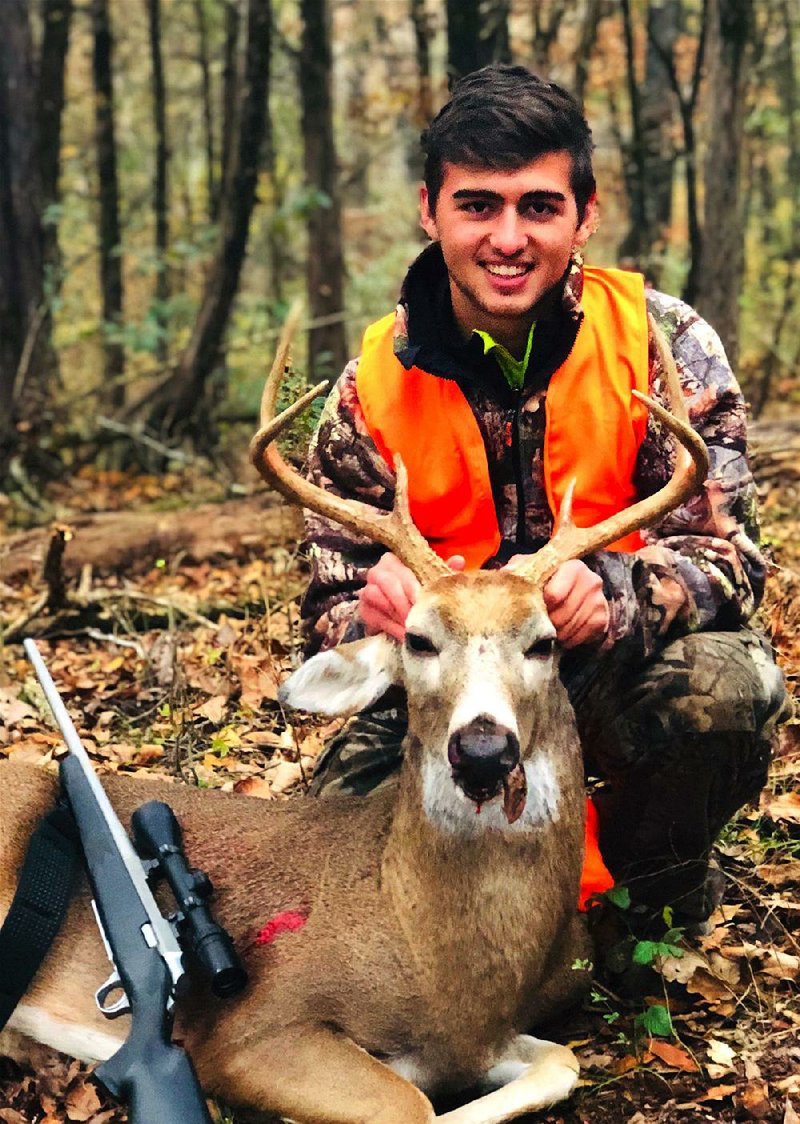 Guilherme Ribeiro, 17, an exchange student from Itajai, Brazil, was initiated into Arkansas’ hunting culture Nov. 11 when he killed this buck while hunting with his exchange host, Brad Kohler.

Guilherme Ribeiro, 17, an exchange student from Itajai, Brazil, experienced something most of his countrymen will never know Nov. 11 when he killed an Arkansas whitetailed deer.

Through a cascade of coincidences, Ribeiro was placed in the home of Brad Kohler and Heather Kohler of Fort Smith. Ribeiro originally was assigned to a family in Mountain Home and had already enrolled in Mountain Home High School. However, his host family's home burned, and the family couldn't take him. The exchange organization asked the Kohlers, whose daughter Evan Kohler is a former exchange student, if they could host Ribeiro for six weeks until it found a replacement family.

"When he got here, he didn't realize he wasn't going to stay here for the whole year," Brad Kohler said. "I'm not going to do that to a kid, and besides, he was a good fit for us. We decided to keep him for the full year."

For his first weekend in Arkansas, the Kohlers took Ribeiro on an overnight float trip on the Buffalo River.

"There was a big sweetgum tree that fell in the river, and 'G' had us back paddle to it so he could get a closer look at it," Kohler said. "He wanted to know all about the gum balls. It's crazy seeing things we grew up with through the eyes of someone who's seeing them for the first time."

"When we made initial contact through social media, 'G' immediately asked me about being a hunter," Kohler said. "He thought it was so cool, but it's not allowed in his country."

When Ribeiro arrived in August, Kohler invited him to hunt, but he would have to earn it. To get the full experience, he helped Kohler cut shooting lanes, build stands, plant food plots, place game cameras and help with all the other preseason preparations.

Ribeiro said the prep work was an immersive introduction to Arkansas forests, which are vastly different than Brazilian forests.

"This poison ivy and bugs, we do not have the same in Brazil," Ribeiro said. "Our leaves usually keep green all year, is not like all this orange, red or yellow leaves that make this wonderful fall here."

After all the work, Kohler asked Ribeiro whether he still wanted to hunt. He did, so Ribeiro obtained a deferred hunter education hunting license, which enables a person born after 1969 to hunt with a mentor without first achieving hunter education certification. The Arkansas Game and Fish Commission enacted this mechanism several years ago to allow prospective hunters an opportunity to see whether they enjoy hunting before committing.

On Nov. 8, two days before opening day of modern gun deer season, heartbreak struck. Ribeiro's grandmother died unexpectedly in Brazil. They were very close, but he was unable to return home for her funeral.

"He was helpless to be that far from home, and he had a very, very rough weekend," Kohler said.

On Sunday, Nov. 11, Kohler took Ribeiro for an afternoon hunt in a pop-up blind at the edge of a food plot. A small buck appeared, but Ribeiro's license entitled him to kill only one deer. He wanted it to be a mature buck.

"I had shown him a picture of a buck on my phone," Kohler said. "I think it's the oldest buck on this property, but I haven't seen him. I told him if I could shoot any buck, that would be the one."

About 15 minutes later, that very buck stepped out at 40 yards. Ribeiro made a perfect shot with a Browning A-Bolt Stainless Stalker in 280 Remington. That is a stout round for an inexperienced shooter, but the recoil didn't bother Ribeiro.

"I was so excited about really shooting a gun and to finally hunt," Ribeiro said. "My heart was beating hard, and my only thought in that moment was, 'When are we going to find the deer?' "

Afterward, Ribeiro shared his joy on social media with his friends back home. They did not approve initially and took him to task.

"In Brazil, people say like we should protect animals," Ribeiro said. "Before I came I thought it was a little bit cruel, but I live here a little and see this new point of view. I understand how important is the job of a deer hunter here."

Kohler said he was impressed with how persuasively Ribeiro turned the tide of opinion.

"He spent the better part of the evening explaining to people back in his country why we do it," Kohler said. "He defended our right to hunt and the reasoning behind it, and their attitudes changed pretty quick. It was eye opening to see it from the perspective of a different culture."

Ribeiro has eaten venison, and Kohler is considering having a shoulder mount made for the buck.

"I have to check with customs to see if his country will accept it," Kohler said.

Ribeiro is hooked and wants to continue hunting.

"We can learn a lot just watching the animals; how they live, what they eat, where they go and why they do what they do," Ribeiro said. "In my country we can't hunt or have guns, so I need to enjoy each moment, each shoot, because maybe I will not have this opportunity again."

Kohler believes the buck transcends the temporal. He said it was a gift from heaven.

"Personally, I think 'G's' grandma sent that buck to us," he said.

Print Headline: Exchange for a buck