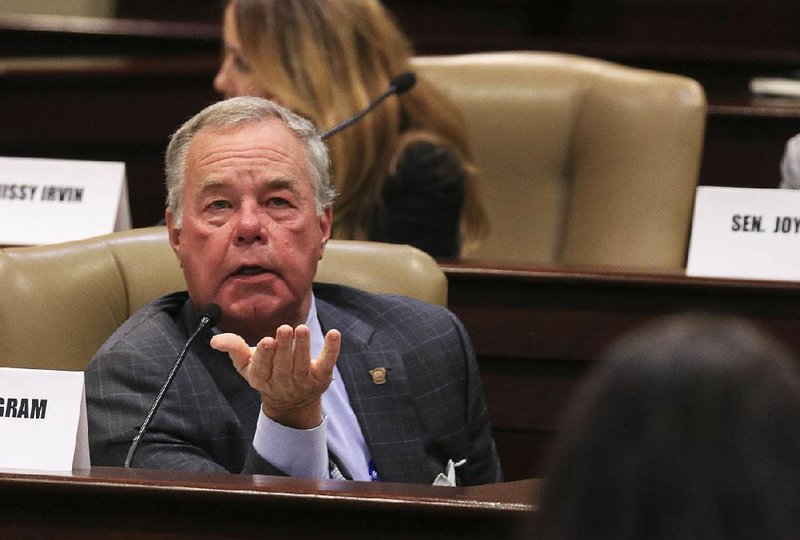 Two weeks ago, Hutchinson told lawmakers looking at agency budgets how his plan would affect the budget over the next two years. His plan will be considered in the regular legislative session that begins Jan. 14.

On Tuesday, lawmakers heard more of the plan:

Paul Gehring, an assistant revenue commissioner, told the Legislature's tax overhaul task force that the governor's proposal is designed to provide tax relief to both middle-income and upper-income taxpayers. It's projected to reduce state tax revenue by $191 million a year after it's fully implemented.

The governor's plan would require a three-fourths vote in the 100-member House of Representatives and 35-member Senate because it would increase individual income tax rates on some taxpayers. However, the increased taxes would be offset by raising the standard deduction from $2,200 to $6,800 for single taxpayers and from $4,400 to $13,600 for married taxpayers, Gehring said.

Gehring said, "There is certainly the ability to structure a trigger, so that if certain benchmarks in the budget or collections were met, perhaps the 2-4-5.9 plan could be implemented at a shorter rate or a longer rate, just depending on whatever the Legislature determines to be the appropriate trigger."

The task force later reviewed a trigger plan that would require, before various tax cuts can take effect, 2 percent annual growth of both individual income tax collections and net available general revenue for distribution to state agencies. The plan also would require that the balance of the state's Long-Term Reserve Fund is at least equal to the balance of the previous fiscal year.

This is Hutchinson's third income tax plan since taking office. The Legislature in 2015 and 2017 enacted his earlier plans to cut individual income tax rates for people with taxable incomes up to $75,000 a year. The state projected that the 2015 and 2017 plans eventually will cut state tax revenue by a total of $150 million a year.

A task force co-chairman, Rep. Lane Jean, R-Magnolia, said, "Granted, we don't have the Internet sales tax passed yet, so I am not sure that's the best way to budget things on what we hope to pass before we have it in hand."

As far as the proposed changes in the state tax code to conform to some changes in the federal tax code, the task force's other co-chairman, Sen. Jim Hendren, R-Sulphur Springs, said, "I think this is maybe like some other legislation that the political viability is going to depend a lot on whether it is part of the tax cut bill.

"If you include that as a stand-alone $28 million [bill], it is not going to be an easy sell" to lawmakers, said Hendren, who is Senate president pro tempore-elect. Hutchinson is his uncle.

Also Tuesday, the tax overhaul task force voted to revise its own plan to cut individual income taxes so that it would reduce the number of tax tables from three to one before phasing in cutting the top individual income tax rate from 6.9 percent to 6.5 percent. State officials project that this plan -- called Option A by the task force -- eventually would reduce revenue by $264.8 million a year.

Afterward, Jean noted that the difference between the task force's proposal and the governor's proposal is that the former would require a simple majority of votes, while Hutchinson's plan would require 75 percent approval in both chambers.

"So in case something happens and we cannot get the governor's plan passed, we are coming back with a simple plan," Jean said.

Hendren said in an interview that both plans are good tax cut plans.

"Option A is more expensive. It's a more broad-based tax cut," he said. "One of the things we'll be deciding next meeting [on Dec. 12] is do we present both, which one do we present first [and] the strategy on passing one.

"I think there is support for both methods, but clearly the 75 votes versus the [simple majority] votes is a significant difference," Hendren said.

Meanwhile, Hendren told the task force members that he's continuing to have discussions with insurance industry representatives regarding a potential compromise about overhauling the home office tax credit granted to insurance companies. The overhaul's intent would be to provide more revenue to cut taxes elsewhere.

A decades-old law allows life, health insurance and disability insurers to get home-office tax credits against their insurance premium taxes. Last month, the task force members learned that the tax credits cost the state more than $40 million a year.

"At this point, we have come close. We have not reached a compromise," he said. The task force will consider taking action on this matter during its Dec. 12 meeting, he said.

"In other words ... we have between now and then to work something out or we'll just throw something out there from the legislative side," Hendren said.