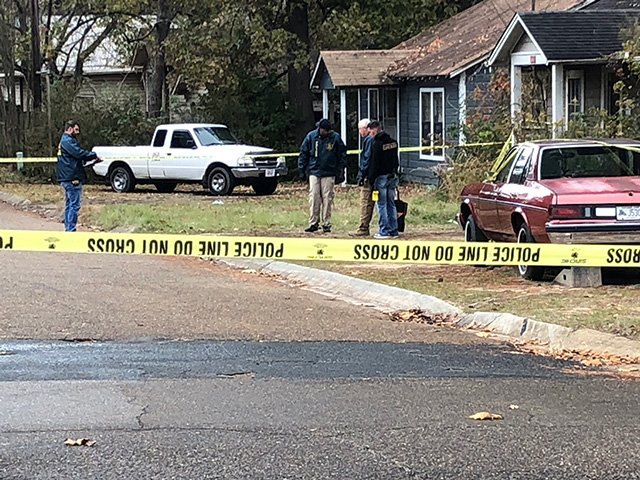 Authorities on Nov. 23 investigate a homicide crime scene at 621 Jeanette Street in Magnolia.

A deputy prosecuting attorney for the 13th Judicial District has released new details into the investigation of four deaths that occurred over a five-day period last week in Magnolia.

Deputy prosecutor Ryan Phillips sent out a news release Tuesday in an effort to clear up confusion surrounding the status of three pending murder investigations and another investigation into a shooting by an officer in which a suspect was killed.

"I believe that it is also important to let the public know where things stand with respect to each of the deaths, and the action being taken at this time," Phillips said.

Two of the homicides occurred within hours of each other Nov. 19. A suspect was shot by an officer the next day, and the other homicide occurred Friday.

"This is only my second month as chief, but I have been with the Police Department for 22 years and I have never seen anything like this happen in a span of a week," Magnolia Police Chief Todd Dew said.

Officers received a report on the initial shooting at 12:06 p.m. Nov. 19 when a caller told police that a man had been shot in the chest on Norma Street. Jarious Shaw, 22, of Magnolia was pronounced dead later at a local hospital.

Authorities issued an arrest warrant Nov. 20 for 30-year-old Roderick McDaniel in the death of Henderson.

Police found McDaniel later that day driving a vehicle near Preston Apartments on Renfroe Street. McDaniel was shot in the chest and killed by a Columbia County sheriff's deputy after McDaniel tried to ram a patrol vehicle, Phillips said in his release.

Police also issued an arrest warrant that day for Stephen Terrell Smith, 24, of Magnolia, on a charge of first-degree murder in Shaw's death.

Smith was arrested Saturday in Bossier City, La., by the U.S. Marshals Fugitive Task Force and was transported Monday to the Columbia County jail in Magnolia, according to Phillips' release.

The Banner-News of Magnolia reported that Smith was sentenced in September 2012 to 15 years in the Arkansas Department of Correction after pleading no contest to aggravated robbery. He was released from prison after serving the minimum time required by his sentence.

The third homicide was reported at 7:38 a.m. Friday when a caller told police a man's body had been found at a residence in the 600 block of Jeanette Street. Police said the man was found in a bedroom.

Phillips identified the man as 80-year-old Nathaniel Smith, the grandfather of Stephen Smith.

Dew, the police chief, said Tuesday that the Arkansas State Police is investigating Nathaniel Smith's homicide. Dew would not say whether Nathaniel Smith's shooting was related to any of the previous homicides or Stephen Smith's arrest.

"Due to the fact we had so much going on with the two previous homicides and other events, we asked the State Police for assistance," Dew said.

Dew said the past week was taxing for his department of 24 officers. Only twice before, in 1994 and 2009, has the city's number of homicides or negligent deaths exceeded two in a year.

"It's been manageable, but tough," Dew said. "We have more officers out patrolling now. We are using all our resources to solve these cases, and in fact we have already solved two of them and the officer-involved shooting doesn't involve us."