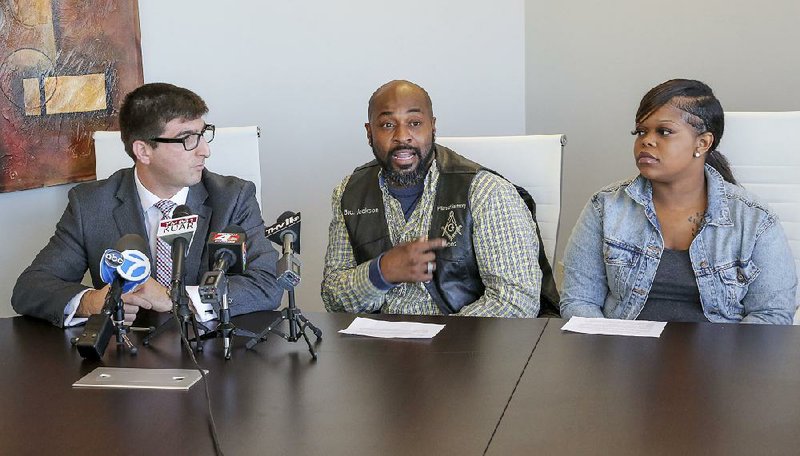 Attorneys for 19 people injured or shot at in the mass shooting at the Power Ultra Lounge in July 2017 filed a lawsuit Wednesday alleging negligence on the part the club's manager and the owner of the Little Rock building that housed the nightclub.

Tyrone Jackson and Tasheara Slocum, two of 19 people named as plaintiffs in the lawsuit filed in Pulaski County circuit court, said Wednesday that they believe the club and building owners could have done more to prevent the shooting and protect the people injured during the July 1, 2017, concert.

"The victims of the Power Ultra Lounge shooting deserve better," Slocum said Wednesday at a news conference in Little Rock. "I refuse to be a lifelong victim."

The lawsuit names Herman Ray Lewis, the manager of Power Ultra Lounge at the time of the shooting; 6th and Center LLC, which owns the building where the shooting occurred; and the business itself as liable for the physical and emotional trauma that patrons experienced.

Ricky Hampton, a rap artist who goes by the name Finese2Tymes, was performing when a barrage of gunfire resulted in 25 people shot and three others injured as they tried to escape. No one was killed in the shooting. Authorities have since said the shooting was related to a gang dispute.

Slocum was shot in the side during the melee. Jackson was not injured, but he was shot at multiple times and said he witnessed a man being shot just feet away from him as he tried to escape the building.

Attorneys for Jackson and Slocum said the 19 plaintiffs include people who were shot or trampled, as well as people who suffered psychological trauma.

"It's no secret that our city has a crime problem," plaintiff's attorney Joshua Gillispie said. "Much of that is difficult to prevent. This particular crime was not."

The registered agent for 6th and Center LLC could not be reached for comment Wednesday. No contact information for Lewis' attorney was readily available.

Power Ultra Lounge has since been evicted from the building.

The 23-page suit said the owners and operators of the establishment should have been aware of the potential violence accompanying the event, given the club's track record and the use of a weapon in the concert's promotion material.

An advertisement of the concert shows Hampton pointing a rifle toward the camera, according to the suit.

In the 24 months preceding the shooting, Little Rock police responded to two shots-fired calls, four battery calls, two assault calls and an aggravated assault report at the club's address, according to the suit.

In one incident, a 32-year-old man was shot in his upper back after someone fired multiple rounds near the club just months after the Power Ultra Lounge moved to the 220 W. Sixth St. location in 2015, according to previous reports.

The lawsuit also says the property did not have the proper permit to hold a concert, which city authorities acknowledged last year.

"They were reckless in a number of ways," said plaintiff's attorney Solomon Radner with Excolo Law PLLC. "This was something that was promoted for violence. ... It was clear that this was going to be attracting violence. When you want to put on a concert that attracts violence, when you do that, you have to provide adequate security."

Radner said some people were frisked and checked for weapons on the way into the club, but the security measures were not diligent.

"There's no possible way that all those guns made it in there without security knowing about it," Radner said. "Why did security let all these people in with their guns? Reports say there were 13 shooters. How did 13 shooters get their guns in there when others were being frisked and wanded?"

Radner said he has experience with lawsuits over mass shootings, including the high school shooting that killed 17 people in February in Parkland, Fla., and the Pulse nightclub shooting in Orlando, Fla., that killed 49 people in 2016.

The suit asks for a jury to grant compensatory and punitive damages, as well as cover attorney's fees and costs along with whatever else the court deems necessary.

The document filed Wednesday is the third lawsuit related to the mass shooting, including a suit by the Green & Gillispie firm that was dropped in October of last year. The plaintiff in that case, Patrick Hardy, who was shot and jumped from a second-story window to escape the violence, is named as a plaintiff in Wednesday's lawsuit.

Gillispie said the previous case was dropped because the attorneys and Hardy decided it would be more beneficial to present his case along with the 18 others named in Wednesday's suit.

Jackson has since been charged with 10 counts of aggravated assault and three charges of second-degree battery in relation to the mass shooting, and faces a separate capital murder charge in relation to the slaying of 14-year-old Cyncere Alexander just two weeks after the Power Ultra Lounge incident.

Hampton is facing a charge of possession of a firearm by certain persons in the Power Ultra Lounge shooting, as well as charges of first-degree battery, aggravated assault, terroristic threatening and criminal mischief after an incident in Forrest City just days before the Little Rock shooting.