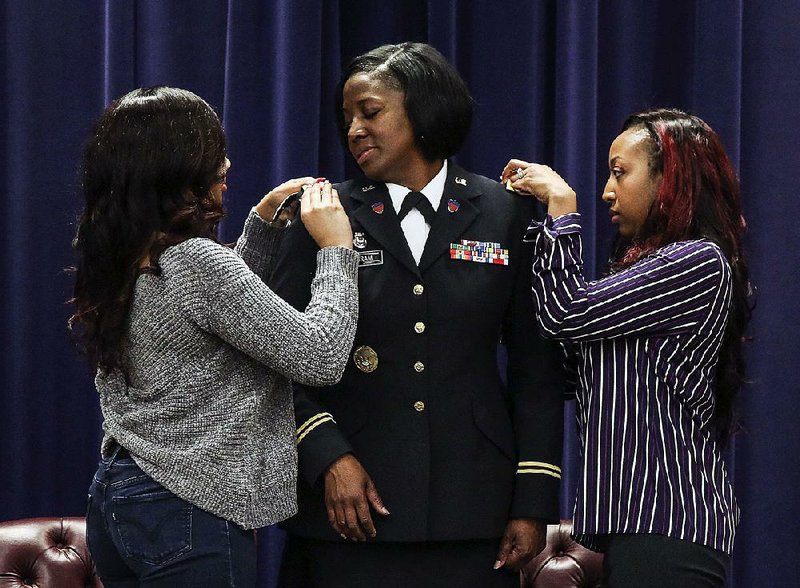 As a high schooler with hot-pink nails and highlights in her hair, Ingram didn't plan to accept the ROTC scholarship if it was offered.

But nearly three decades later, Ingram, 46, was formally promoted to colonel on Thursday at Camp Robinson.

Over the years, she had tried to leave the Army three or four times. Then she embraced the service, and now, she couldn't imagine her life turning out any other way.

"Sometimes your own plans aren't the plans for your life," Ingram said.

Ingram began her military career as a second lieutenant on active duty in the Army in 1995 after being talked into going through the University of Arkansas at Pine Bluff's ROTC program.

After four years on active duty, she planned to leave, but a recruiter talked her into joining the reserve force, so in 1999, she joined the Arkansas Army National Guard where she now serves as deputy chief of staff personnel.

On Thursday, Ingram, with a wide smile and, in some cases, tears of joy, greeted a steady stream of friends and family members attending the promotion ceremony. 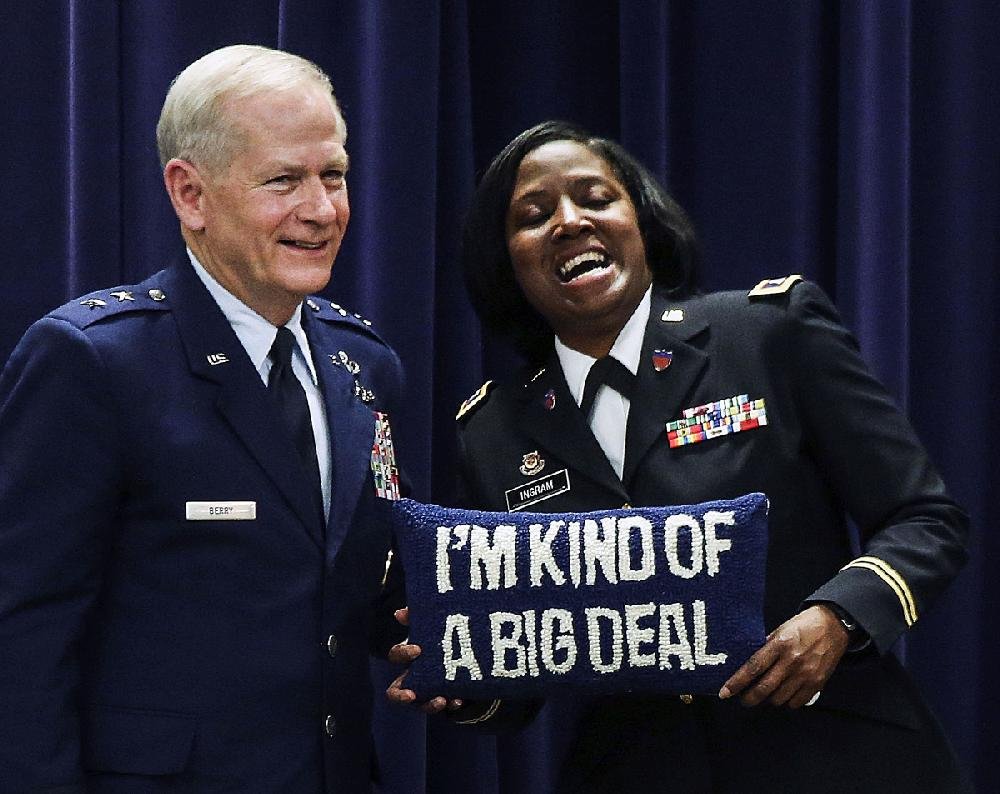 Maj. Gen. Mark H. Berry and Col. Erica Ingram react Thursday after Berry presented her with this pillow during her promotion ceremony at Camp Robinson in North Little Rock.

She deflected all the credit to her "village."

Her late parents taught her as a child growing up in the small southeast Arkansas town of Wilmar that every person is equal regardless of race or gender.

Her high school principal encouraged her to apply for an ROTC scholarship.

Her family, friends and fellow guardsmen encouraged her along the way.

"As long as I can remember, I've always been surrounded by a village," Ingram said. "If I didn't succeed in life, I had no one to blame but myself."

Others were much quicker to credit Ingram. Maj. Gen. Mark Berry, the adjutant general of the Arkansas National Guard, called Thursday's promotion a "historic occasion" for the U.S. Army and Arkansas.

"I have complete confidence and trust in Erica Ingram," he said.

"Every single role in life that has been given to you, you've been solid," Deason said.

Ingram's race wasn't a major focus of Thursday's ceremony. While she acknowledged the importance of her race and Thursday's occasion, Ingram again deflected credit.

"Historic, I understand," Ingram said. "Honestly, I don't think it's because I'm that special or amazing. I just happen to be someone who was provided the opportunities and the right path, so I just happened to be the person at the time that had the credentials."

She is a past president of the National Guard Association of Arkansas and a "big sister" with Big Brother/Big Sister of Central of Arkansas program.

Col. Tina Lipscomb, the Arkansas Air National Guard's first Hispanic female colonel, said that the promotion of women and minority-group members is important because of the message it sends kids.

"It's important to show them it doesn't matter what color or gender you are," Lipscomb said. "Anything is possible, so dream big."