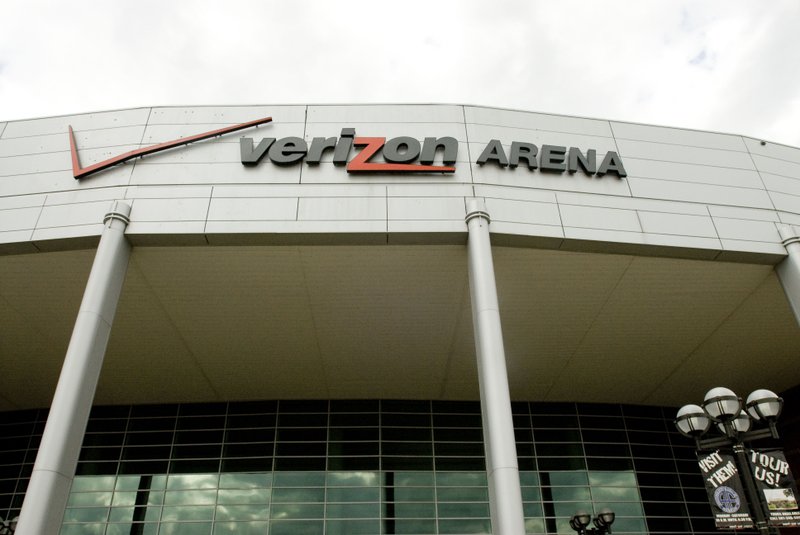 Verizon Arena is shown in this 2012 file photo.

No one knows who will win the rights to rename Verizon Arena in North Little Rock, where officials recently announced their search for a naming-rights partner to sponsor the venue beginning in 2019.

But Chris Foy, whose firm Impression Sports & Entertainment specializes in naming-rights deals, said it's likely that the new partner will have Arkansas or regional connections, although that's not guaranteed.

"I think it has to have a very strong local presence. ... The companies who are going to take it on have to have a really strong geographic tie to the area," though the bidder might not be headquartered in the Little Rock area, he said.

A regional sponsor arrangement would be similar to that of the venue's original sponsor, Alltel Wireless. The Little Rock-founded company paid $7 million in a 20-year naming rights agreement with the arena, which opened in 1999.

The landscape has changed since that original deal, and naming-rights arrangements have gained "a lot of momentum," Foy said.

Potential sponsors, especially in the banking and health care industries, are eager to capitalize on the brand awareness that comes from attaching their names to a venue, and newly built arenas and stadiums are commanding eye-popping fees for that privilege.

In one recent deal, Globe Life Insurance agreed to pay $11 million a year for 25 years to name the new ballpark of the Texas Rangers in Arlington, Texas, SportsBusiness Daily reported.

The situation in North Little Rock is a bit different in that the arena is in what is referred to as a "secondary" market that lacks a major-league sports team to draw frequent mentions in national news reports. Still, Foy said, the 18,000-seat arena is in a good position to draw bidders as its executives begin the hunt.

"The good thing about the scenario in [North] Little Rock is that it's an exceptional venue, their programming is exceptional -- and that's going to be the catalyst to drive revenue for naming rights," he said. "You know, [it's a] smaller city, but when we look at opportunities like this, that doesn't scare us."

University of Arkansas at Little Rock associate professor of marketing David Gilliam said "a pretty broad spectrum" of companies could have interest in a partnership with the North Little Rock arena, noting naming-rights deals by companies in the banking, insurance, retail and communications industries.

But the Verizon name has been on the arena since a 2009 merger with Alltel Wireless, and changing it will create some confusion, at least for a while, he said.

"I think the arena would have been better off if Verizon had re-signed the contract, because there's that continuity," he said. "People will continue to call it the Verizon Arena for the next decade, off and on. ... If Old Navy picks up the rights, it will be a long time before people start calling it the Old Navy arena. It is problematical for the arena in that it sort of damages their brand and their name recognition."

"It takes some time, no question," Foy said. "When you're looking at a renaming, it'll take some time for the community to adapt and adjust."

Gilliam said naming-rights arrangements are increasingly popular among companies seeking to catch the attention of consumers, although he's skeptical about their effectiveness.

In a world where consumers "go to great lengths" to skip watching traditional advertisements, companies have the idea that naming-rights agreements help them become "part of the tapestry of [consumers'] conversation ... really, it's somewhat of a desperate attempt," he said.

That eagerness to reach customers has translated into lucrative arrangements for many arenas and large venues, including Verizon Arena.

Such a naming-rights agreement is what Verizon Arena General Manager Michael Marion said he is studying in preparation for seeking bidders.

Dixon said he doesn't know enough about industry around Little Rock to make a guess about prospective sponsors for the North Little Rock venue, but the arena is well-known in the entertainment industry and is in a good position to get a new partner.

Verizon Arena "has a good reputation. ... Artists want to play there," Dixon said.

Another agreement that North Little Rock arena officials are looking at is the 2017 deal signed for the TaxSlayer Center (formerly the iWireless Center) in Moline, Ill. Executive Director Scott Mullen said the $3.3 million, 10-year naming-rights contract has served as "a little insurance policy."

TaxSlayer Center is similar to Verizon Arena in that it operates independently, without the assistance of tax money. With the company's sponsorship, "we have extra money each year that we can put towards the bottom line," Mullen said.

It took at least a year and a half to find the right naming-rights partner, Mullen said, describing a long process in which no area business was able to make the kind of offer that officials were seeking. (Foy was hired as a consultant to broker the connection with Georgia-based financial services firm TaxSlayer.)

Marion said Tuesday that the arena hopes to have a naming-rights partner selected by next spring and an agreement to go into effect by October 2019.

He said he'd love to have a local sponsor, but he is most interested in a bid from a partner who will make the most of the arrangement.

"The expectation is that we'll have a naming-rights sponsor who ... can take advantage of the advertising opportunity involved," Marion said. "Think about how many times our name is on the radio every day."