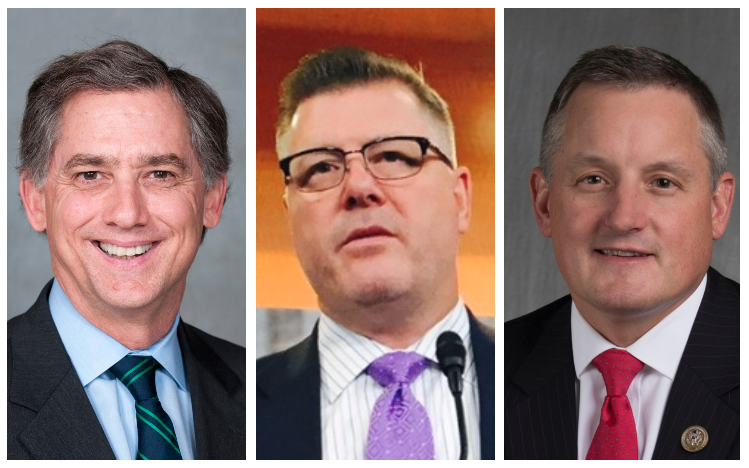 U.S. Reps. French Hill, Bruce Westerman and Rick Crawford oppose a measure on November's ballot that would gradually raise the state's minimum wage, while Arkansas' other U.S. representative and two senators haven't taken a public position on the issue.

Meanwhile, the Democrats challenging the four Republican U.S. House incumbents universally support Issue 5, the proposed initiated act that would raise the state's minimum wage by $2.50 an hour to $11 an hour by 2021.

Hill, of Little Rock, plans to vote "no" on Issue 5 on Nov. 6 because, he said, it would make it harder for some people to start working.

"As I have said in the past, I do not support raising the minimum wage," Hill said in a statement. "Raising the minimum wage costs jobs and opportunities to start a career, particularly for those entering the workforce or trying to get their first job. I have dedicated my time in Congress to advocating for skilled workforce development to prepare Arkansans for good-paying jobs in long-term careers that pay well above the minimum wage."

Ryan Saylor, a Westerman spokesman, said Friday that Westerman planned to vote against the minimum-wage increase. Westerman is from Hot Springs.

Through a spokesman, Crawford said that while he opposes the proposal, he also believes the issue is best determined by ballot initiative so everyone has the ability to support or oppose it.

"If the proponents of this issue would tell voters across Arkansas that it could very likely end up costing jobs and lost wages if increased, we could have a real and meaningful discussion about economic security," Crawford, of Jonesboro, said in a statement. "We have to talk more about achieving that goal through workforce development and updated skills training to meet the demands of today's economy, not about minimum wages and fewer opportunities."

Alexia Sikora, a spokesman for U.S. Rep. Steve Womack of Rogers, didn't say how Womack planned to vote on the issue.

"It's a state issue that will be decided by the voters, and the Congressman will be joining others in casting his ballot on the topic in November," Sikora said in an email.

Arkansas has a higher minimum wage than any of its surrounding states, according to the National Conference of State Legislatures.

Arkansas' minimum wage was last raised to $8.50 an hour in 2014, also through a ballot initiative. The state Legislature hasn't voted to raise the minimum wage in more than a decade.

State Rep. Clarke Tucker, D-Little Rock, who is challenging Hill for the 2nd Congressional District seat, plans to vote for the initiated act. Tucker has previously voiced support for Issue 5.

"Hard-working Arkansas families are long overdue for a raise," Tucker said in a Friday statement. "Many are working multiple jobs and still unable to afford life's basic needs. We need life's basic needs, like health care, child care, and prescription drugs, to cost less, but we also need more higher-paying jobs. We have a lot of work ahead of us to address all of these important issues, but this specific proposal certainly improves the ability of hard-working Arkansans to earn their way through this world, and that is why I support it."

Hayden Shamel of Hot Springs, a Democrat who is challenging Westerman for the 4th Congressional District seat, said she supports Issue 5, and she attacked Westerman for protecting "corporations and special interest groups that are funding his campaign."

"As an educator who has taught in high schools and community colleges throughout south and central Arkansas, I know that 1 out of every 4 of our children and elderly are living in poverty," Shamel said in a statement. "We deserve a representative who knows that our people shouldn't have to work two and three jobs just to make ends meet to provide for their kids and that there shouldn't even be a category called 'working' poor."

Chintan Desai of Helena-West Helena, the Democrat challenging Crawford for Arkansas' 1st Congressional District seat, said he supports Issue 5, and he'd like to see the federal minimum wage raised even further to $15 an hour. Desai cited a National Low Income Housing Coalition report that concluded an average Arkansan must earn $13.84 an hour to be able to afford a two-bedroom home.

"They'll need more than that if they're going to pay for job training, health care, etc.," Desai said. "[Issue 5] is the right move and taking us in the right direction."

"It's time that Arkansans' wages caught up with their hard work," he said.

U.S. Sen. John Boozman, R-Ark., doesn't have a position on Issue 5, but he "looks forward to learning about it before he joins Arkansans at his voting precinct to cast his vote," spokesman Patrick Creamer said.

U.S. Sen. Tom Cotton, R-Ark., is "still looking into the initiative," spokesman James Arnold said. Neither senator is up for re-election this year.

When asked last week, Gov. Asa Hutchinson and Lt. Gov. Tim Griffin -- both Republicans -- publicly opposed Issue 5, saying the proposal would kill jobs. Hutchinson said he supports raising the minimum wage, but that it should be done through legislative action when the "economic outlook" supports it.

Issue 5 proponents argue that it would put about $455 million in the pockets of more than 300,000 Arkansans once it's fully implemented. Issue 5 has been challenged in court. A special master ruled last week that Issue 5 had sufficient signatures to remain on the ballot. His recommendations will now be considered by the Arkansas Supreme Court.