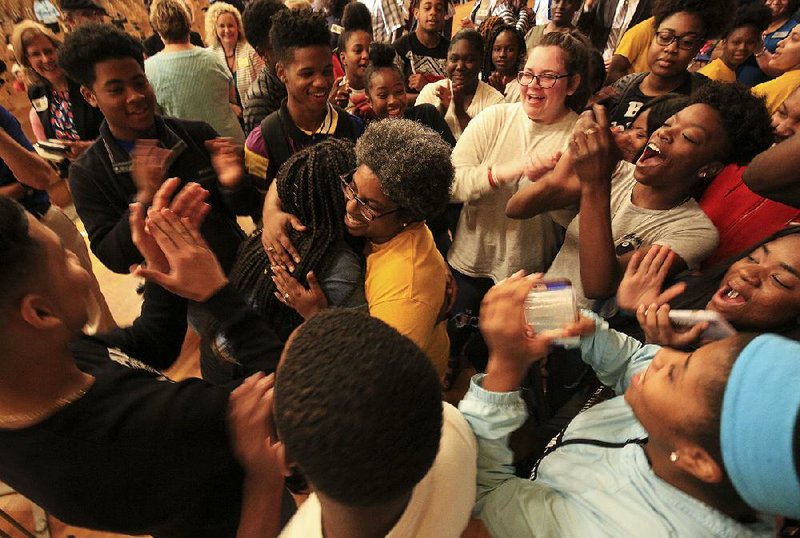 Little Rock Central High School students congratulate teacher Stacey McAdoo (center) after she was named Arkansas’ 2019 Teacher of the Year during a ceremony Monday at the school.

Not on McAdoo's list for Monday: Her receipt of 2019 Arkansas Teacher of the Year honors.

But when Central's Writeous Poetry Club students completed their powerful performance, the midstage curtain opened behind them to reveal a smiling Gov. Asa Hutchinson, state Education Commissioner Johnny Key, Little Rock Superintendent Mike Poore, 2018 Teacher of the Year Randi House of Conway and about 20 other dignitaries -- all on hand to surprise 16-year educator McAdoo with the state's top-teacher honor.

"It's odd to be a communications teacher and be without words," McAdoo responded when it was her turn to talk about the honor that will provide her with $14,000, a sabbatical year from Central to travel and ex officio membership on the state Board of Education. She will also compete for National Teacher of the Year.

"I'm truly honored and proud to be named the 2019 Arkansas Teacher of the Year," she said, her voice rising with excitement and happiness as the audience roared.

"I thank each and every one of you for making it happen," she told her students. "You all make me what I am."

In addition to sponsoring the lunchtime poetry club and co-sponsoring a drama/debate club, McAdoo, 42, teaches courses in speech communications and Advancement Via Individual Determination, or AVID, at Central. AVID is a national program designed to help students prepare for college, especially students who might be the first in their families to attend college. Because of McAdoo's efforts, Central's AVID program has won national certification.

In keeping with the theme of the morning, Key announced McAdoo's Teacher of the Year award in rhyme: "Standing up for the misunderstood, for creating opportunity for good, whether that took creative writing, poetry or rap, you became a bridge, closing the gap," he told the teacher. "You do whatever it takes. Lift up lives; tear down walls. The impact you make everyday is visible, visible, in Central's halls."

Hutchinson told the crowd that "the magic of Mrs. McAdoo is that she is able to inspire students and teach in a way that makes them want to learn. That to me is what makes a great teacher."

In August, McAdoo was named one of four 2019 Arkansas Teacher of the Year semi-finalists and received $2,000. The state selection committee then made site visits to the schools of the semi-finalists before selecting McAdoo for the singular award.

House, the 2018 Teacher of the Year, described the state's award program as one of the best in the nation because of the support provided to it by the Walton Family Foundation of Bentonville.

"I can't begin to describe what you are about to experience," House told McAdoo. "Your voice is going to be bigger than ever. Your platform is bigger than you ever imagined."

"I was truly, truly shocked," McAdoo said in an interview after the presentation. "And the way they got me here is they said they were going to interview my students. I am all stressed -- in teacher mode -- trying to make sure they were all here and prepared, and it was a total surprise."

McAdoo is a graduate of Little Rock's Hall High and has worked since 2002 at Central, where her husband Leron McAdoo also works and daughter Jamee is a student. The McAdoos' son, Norel, is a college freshman. Leron McAdoo's father, C.E. McAdoo, was a member of the Little Rock School Board prior to the 2015 state takeover of the district.

McAdoo said she is motivated to teach because she believes all children can, want to and deserve to learn.

"I try to treat every student like I would my own," she added about the 150 students in her classes plus the 75 in the poetry club.

"To say I love my students is an understatement," she said, noting that she works with her AVID students from when they start in the ninth grade until they graduate, which creates deep student-teacher bonds.

In her new role, McAdoo said she is committed to finding ways to give students beneficial experiences that close the "opportunity gap" that sometimes exists between students, and makes success difficult for some students to achieve.

McAdoo did not start out with the intention to teach, having first earned a bachelor's degree in professional and technical writing from the University of Arkansas at Little Rock. She said she initially resisted teaching.

"Long story, short, after my brother [Craig James] died in a car accident, I realized life was short and I needed to do what I was supposed to do," McAdoo said. "I cut off my hair, quit my job and went through a master's of art in teaching at the University of Arkansas at Monticello, and I actually taught my first year while in the master's program getting certified. I've been at Central the whole time."

Central High Principal Nancy Rousseau recalled McAdoo coming to her years ago to talk about her aspirations to teach English. Rousseau said she assured McAdoo then that a classroom job would be hers for the taking once she obtained the necessary credentials.

McAdoo's Writeous Poetry Club students on Monday performed three pieces that they had written: I Am Enough, It's Not a Drill and Motivation. Later, the club members praised their teacher's devotion to them.

"Mrs. McAdoo is our 'Mom-ager,' like a manager but we call her Mom-ager," senior and poetry club member Tamya Sisa said after the ceremony. "We perform before different people and in different places and it's all through Mrs. McAdoo. She handles every single thing for us. We've been able to monetize our talents through her. We have just learned so much from her."

Jacob Cunningham, a senior in the poetry club, said McAdoo treats him like a son.

Erica Conley, a junior, said everything that McAdoo has taught her in AVID and speech communications as well as in the poetry club has stuck with her and impacted her life.

"I just love her," Conley said. "You'll never meet another teacher like her."