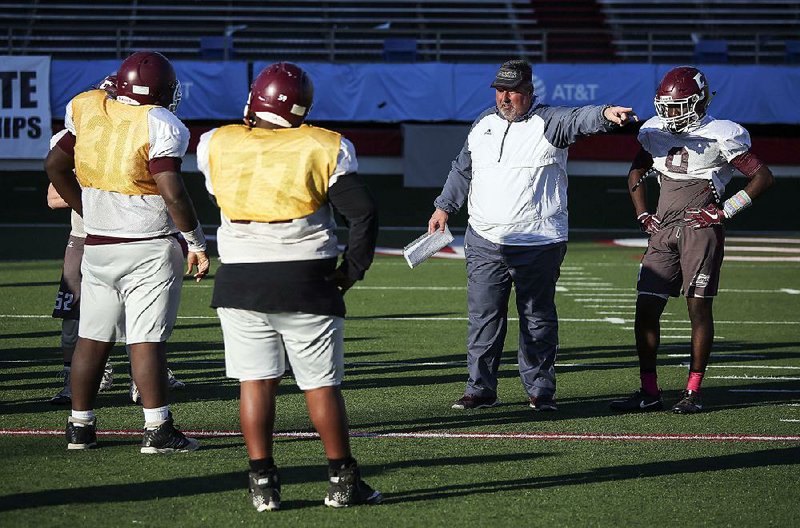 Foreman Coach Mark King and the Gators will host Mount Ida in a 7-2A Conference showdown Friday night.

A loss to Mount Ida nearly a year ago changed Foreman's football program.

Mount Ida routed Foreman 36-7 on Oct. 13, which was the Gators' only loss of the season.

The Gators avenged the loss in the Class 2A state championship game with a 24-21 victory over the Lions at War Memorial Stadium in Little Rock.

"Everything had come so easy to us. We rolled through everybody," King said. "We didn't have much adversity before we faced them the first time. You try to tell your kids that it's going to be different, to fight for every yard you get. But you can't simulate that.

"We didn't play very well. From that point on, our kids realized you have to prepare every week to play."

The No. 1 Gators haven't allowed a point in their past five games. They allowed 45 points to Smackover on Aug. 27, but what was a 45-24 loss to the Buckaroos was later deemed a forfeit because of the use of an ineligible player by Smackover.

Sophomore defensive lineman Chris Haywood has 26 tackles, including 12 for a loss, and 3 sacks.

"He's a difficult matchup for everyone," King said. "He could step in at a 6A or a 7A school because of his motor."

Mount Ida is averaging 37.7 points per game with what King calls a three-headed monster of seniors Jonathan Lagrange, Gage Dyer and Cade Jackson.

"They're typical Mount Ida," King said. "They're smash mouth. They're fundamentally sound. They're every bit as good as they were last year."

King said the Gators and Lions have a lot of respect for each other, and he's tried to emulate Mount Ida's program.

"They were on the top of the mountain," King said. "That was the measuring stick for 2A football. Do things the right way. Respect your teammates, your coaches and your opponent.

"It has helped our kids watching that program."

Little Rock McClellan faces its biggest test of the season Friday night at Texarkana in a meeting of 5A-South Conference leaders.

The Crimson Lions (6-0, 3-0 5A-South) and Razorbacks (5-1, 3-0) joined the 5A-South this season. McClellan, a Class 5A state runner-up last season, was in the 5A-Central before this season's switch, and Texarkana moved down from Class 6A.

Both teams have been dominant in 5A-South play so far.

Texarkana has not allowed more than 14 points in a conference game, a 48-14 victory at Hot Springs Lakeside on Friday. McClellan is allowing 7.3 points in three 5A-South games.

"They look a lot like us," Moody said. "They're fast. They run to the football."

On Friday in a 62-15 victory over Hope at Lion Stadium, senior quarterback Xavion Morgan accounted for 5 touchdowns, including 3 passing.

Morgan and classmate Jaylon Williams are splitting time at quarterback, giving Moody depth that he is not used to at the position.

"We utilize their strengths to put us in good situations," Moody said.

Playing on the road is not unusual for the Crimson Lions. They played their home games in 2017 on the road and finally returned to Lion Stadium after the Little Rock School District renovated the venue's grass field.

Since the start of the 2017 season, McClellan has played 16 games away from Lion Stadium. Tonight's game marks 17.

"We have a little more experience playing on the road than anybody else," Moody said. "Traveling is not a problem for us. Sometimes, we play better on the road.

"The biggest, baddest guy on the line of scrimmage will win the game. We're looking forward to it."

The 7A-Central Conference schedule has not been kind to Cabot.

Cabot (2-4, 0-3 7A-Central) started 2-0 but is on a four-game losing streak, including three consecutive losses in 7A-Central play to Little Rock Catholic, Fort Smith Southside and Conway.

The Panthers' three losses have come by a combined 14 points and came down to either the final minute in the fourth quarter or overtime.

Catholic defeated Cabot 15-13 in a game that started Sept. 21 but was completed the next day because of inclement weather. Rockets quarterback Jordan Eddington threw a 26-yard touchdown pass to Cole Plafcan with 10 seconds remaining.

Southside held off Cabot 30-24 on Sept. 28. Taye Gatewood threw a game-winning touchdown pass to Tyrese Solomon with one minute left.

Conway earned a 34-28 victory in overtime Friday when Jovoni Johnson scored from 2 yards out. Cabot had an opportunity to take the lead on the first series of overtime, but TJ Rogers was stopped at the Conway 1 on fourth and goal from the 3.

Coach Mike Malham, who has been at 299 victories since a 27-7 victory at El Dorado on Sept. 7, couldn't believe the Panthers' luck down the stretch in their first three league games.

"I don't know you can come as close to winning all three of them like we have and come out on the wrong side of them," Malham said. "But that's life, man. There's nothing you can do about it."

The Panthers host Little Rock Central (1-4, 0-3) on Friday. Malham hopes his team can get back into the 7A-Central playoff race. The league takes six of its eight teams to the Class 7A playoffs.

"I told them to keep your head up," Malham said. "If you're a man, you come back stronger. If you let up now, you're a boy, not a man. That's what builds character.

"You're going to have setbacks in life. You can't lay down. You can't quit. You have to keep working and working. Sooner or later, it's going to happen."

For the first time in a decade, Blytheville is 3-0 in the 5A-East Conference.

The Chickasaws (4-2) have conference victories against Wynne, Nettleton and Greene County Tech. They earned a 37-7 victory over Wynne in their league opener Sept. 21, which for Coach Ben Fisher was a critical one.

"We could never get over the Wynne hump," Fisher said. "Beating them showed the kids that they have the mentality to deserve to be on the field.

"Sometimes in the past, you felt the kids were uptight. Did we belong on the field with those guys? It showed that we can compete."

Blytheville is led by junior running back Jermel Woods, who finished with 100-yard rushing performances in the past two weeks.

"He's seeing the holes, not trying to do too much and getting behind the offensive line," Fisher said.

The Chickasaws host Valley View (4-2, 2-1) on Friday night. In the fourth week of the conference season, the Valley View-Blytheville game is the most important so far, a departure from past seasons in the 5A-East.

"There's a little more parity this year," Fisher said. "But it's still a tough league."