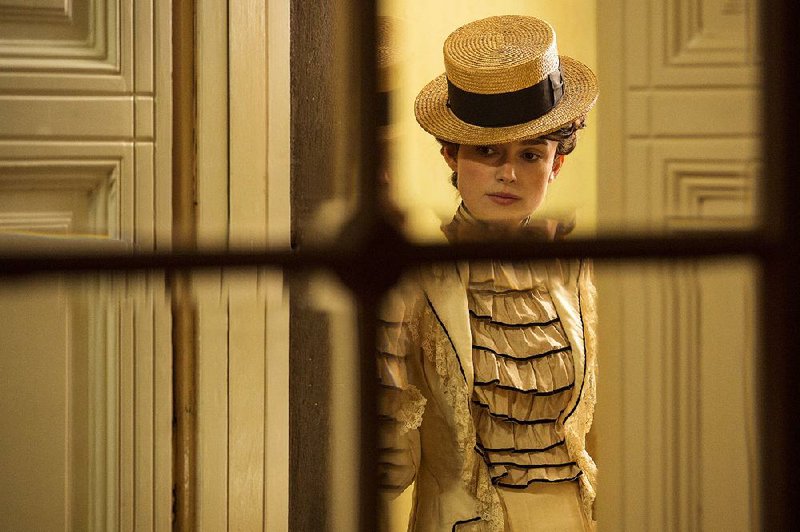 Colette (Keira Knightley) would go on to become one of France’s greatest writers, but first she had to squirm out from under the thumb of her first husband and the patriarchal assumptions during La Belle Epoque. Wash Westmoreland dramatizes these formative years in Colette.

Wash Westmoreland's Colette starts out as a thuddingly orthodox literary biopic, complete with obvious music cues and scenes telegraphing the damped fire of our coquettish country heroine. If you are familiar with the broad outlines of the career of French novelist Sidonie-Gabrielle Colette, better known as simply Colette (Keira Knightley), you might feel impatient with the stage-setting, ready to move on to Paris and beyond.

But Westmoreland has something else in mind other than a survey of Colette's life and career. He means to concentrate on a relatively brief (though formatively crucial) part of the artist's life, specifically the years she was married to Henry Gauthier-Villars (Dominic West), a rakish publisher, writer and literary entrepreneur known popularly as Willy.

Rating: R, for some sexuality/nudity

This is the story of her becoming Colette, and despite the conventionality of the first 40 minutes or so, the movie eventually manages to engage us to the point that we might wish for a sequel. It stops before the World War begins -- more than 30 years before she writes Gigi.

She was 20 when they married. He was 34, and introduced her to the smarter set of fin-de-siecle Paris, encouraging her to participate in a kind of open marriage. (The movie indicates that Willy was fine with Colette taking female lovers, but not so cool with her dallying around with boys.) He's a little less liberal-minded when it comes to allowing her to take credit for her work -- Colette's first four novels, which featured a heroine named Claudine (based on Colette) and were (probably) almost completely written by her, were first published under Willy's name, which today we might better understand as a brand. Willy was convinced his public would react negatively to a scandalous roman a clef published under a woman's name. At least that was his story.

And maybe it has merit. Willy employs a stable of writers in a James Patterson-like factory to produce various publications, slapping his brand on all their work while paying them by the piece. They obviously see some advantage in it, and for his part Willy is barely covering his (admittedly lavish) expenses. He provides Colette with a libertine lifestyle among the avant-garde and a country house in which to write. He even provides some tough-love literary mentoring -- when she's blocked, he locks her in a room and refuses to let her out until she's produced some pages.

What's fun about the film is watching as she bristles and strains against Willy's velvet oppression. Colette is a great role for Knightley in part because she needn't suppress her modernity -- her corsets exist to be burst. While a good deal of thought and expense has gone into dressing these characters and these sets, this is no Merchant-Ivory cabinet-of-curiosity prestige production -- there are warm bodies beneath those Renoir-worthy duds. (Costume designer Andrea Flesch took pains to re-create Colette's signature proto-androgynous style.)

That's not to say the movie doesn't occasionally go out of whack, as when Poldark star Eleanor Tomlinson debunks the myth that English actors can handle any sort of dialect by adopting a hair-raising backwoods accent as New Orleans socialite Georgie Raoul-Duval, whom both Willy and Colette manage to bed. And despite all the obvious efforts at authenticity, this is one of those movies where all the French people are speaking English with very proper British accents.

The film wraps up about the same time Colette's marriage to Willy did, upon the first publication under her own name, La Vagabonde (1910), an overtly feminist work about her days working in the theater. By then she was involved in an affair with Missy (Denise Gough), Mathilde de Morny, a wealthy artist of noble blood who habitually dressed as a man, alternately titillating and scandalizing French society. (Not shown in the film; Missy bought Colette a villa near the beach in Brittany on the day her divorce from Willy was final. When the couple split the blanket a year later, Colette kept the house.)

Colette went on to write 30 more novels, most of which drew on her life and offered a sharp critique of sexual politics. She committed some fine journalism during the World War and eventually legally established herself as the author of the Claudine novels. She married again in 1912 to Henry de Jouvenel, with whom she had a daughter (he divorced her in 1924, after she undertook an affair with his son from a previous marriage).

She lived in Paris through the Nazi occupation, producing two memoirs (published in English as Looking Backwards). She was nominated for the Nobel Prize in Literature in 1948, and in 1951, personally selected the then unknown Audrey Hepburn for the lead role in the film version of her novel Gigi.

Colette was, as they say, a pistol. Westmoreland and company do fine by her, as far as they go. It's not a knock to say this Colette feels like a prequel.