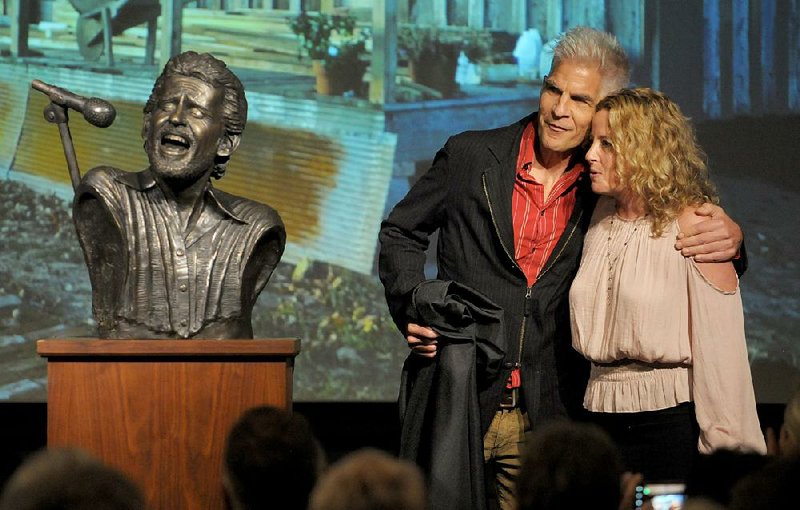 "As an Arkansawyer, as an artist and as a music lover, this is a real dream," said Kevin Kresse, the artist, just before unveiling the bust at the David and Barbara Pryor Center for Arkansas Oral and Visual History in downtown Fayetteville.

The bust was presented to Helm's daughter, Amy Helm, who is also a singer and musician.

She thanked the crowd of about 80 "for being here today and for your heart and your passion and for everybody's intention to honor him in such a beautiful way.

"I know that he would be thrilled with this," Amy Helm said of her father.

The bust will be taken to Marvell for a presentation there Oct. 20, said Joe Griffith, organizer of Levon Helm Legacy Project.

It will reside permanently in or near Levon Helm's boyhood home, which was moved from Turkey Scratch to downtown Marvell. The house was added to the Arkansas Register of Historic Places in July.

Griffith said renovation work on the house should be complete in another six months.

The Band went on to record 10 studio albums of its own. Helm is probably best remembered as the singer of The Band songs "The Weight" and "The Night They Drove Old Dixie Down."

During his solo career, Helm won Grammy awards for his albums Dirt Farmer, Electric Dirt and Ramble At The Ryman.

Helm was born near Elaine, grew up in Turkey Scratch and attended school in Marvell -- all of which are in Phillips County in east Arkansas.

In the 1980s, he lived in Springdale in Washington County, but Helm spent most of his later years in Woodstock, N.Y., where he held regular "midnight ramble" concerts in his barn.