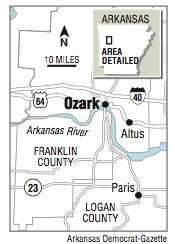 The prosecutor for Franklin County said he will request a special prosecutor to look into an Ozark mayoral candidate's accusations of corruption in city government.

Stephen Whiteaker has accused Ozark City Clerk Sonya Eveld of making personal purchases with the city's credit card; said that one of his opponents, Mayor T.R. McNutt, failed to follow through for two months on a City Council vote for a special audit of the Ozark Fire Department; and said that another mayoral candidate, council member Roxie Hall, violated the Arkansas Freedom of Information Act by exchanging text messages with two other council members discussing city business.

Gibbons said he was requesting the special prosecutor because the deputy prosecutor for Franklin County, Jeff Phillips, also works as Ozark's city attorney. He said Phillips also will become prosecutor for the 5th Judicial Circuit in January after Gibbons' term expires.

"The allegations about the city clerk need to be looked at and because of the timing, it's best to have a special prosecutor," Gibbons said.

Whiteaker said he had uncovered information through city documents sought under the Freedom of Information Act that Eveld had made several purchases online with the city's credit card, then repaid the money.

"You can't rob a bank and then pay the bank back," McCutchen said.

McNutt acknowledged Monday that Eveld had made the credit card purchases but said she paid the money back and that there was documentation to back the repayments.

Whiteaker contends Eveld has not paid back all the money she spent on the city's credit card.

McNutt said the City Council has not discussed Eveld's purchases but would wait for completion of a special audit being conducted by the Division of Legislative Audit.

The city clerk is an elected position in Ozark. Eveld is running for re-election in the Nov. 6 general election against opponent Kristy Miner. The position is nonpartisan.

Eveld was not at work Monday and did not return a message that was left on her home phone seeking comment.

The audit was another cause of complaint by Whiteaker. He said the City Council voted to call for a special audit of the Ozark Fire Department in a June 21 special meeting but that McNutt did not follow through on the council members' vote until August.

McNutt said that after the City Council voted for the audit at the June special meeting, he and council members assumed the audit would begin automatically. It wasn't until he checked with auditors a month later that he discovered he had to contact the legislative audit office to request the audit.

He said the auditors had finished reviewing the Fire Department's records for 2017 last week, and he was told the completed audit could be issued in December. Auditors told him they found some procedural problems but no criminal findings, McNutt said.

Whiteaker said he received information about spending by the Fire Department and Kevin Eveld, who is Sonya Eveld's husband and was fire chief until he resigned effective June 30. Whiteaker said he believed Eveld resigned because of the information he was uncovering about the department's spending.

Minutes from the Aug. 13 City Council meeting contained a remark from Whiteaker: "Steve Whiteaker took the podium and warned the council that a storm is coming brought on by the city themselves and it could not be stopped and the city officials would not survive it."

While he had received some information, such as $300 spent for a conference at The Lodge at Mount Magazine that the chief and his wife attended less than 40 miles from home, Whiteaker said Eveld has not responded to all of his Freedom of Information Act requests involving the Fire Department and the Street Department.

A lawsuit filed by McCutchen against Ozark in Franklin County Circuit Court in July had attached to it 42 Freedom of Information Act requests Whiteaker made to the city.

Some of the responses he received had information that had nothing to do with what he was requesting, he said. At other times, he said, he received larger amounts of documents than were necessary. He said he believed it was an attempt by city officials to make him back off his inquiries.

McNutt responded that Whiteaker had no proof of the allegations he was making about spending in Ozark. The effort to fulfill his almost-daily Freedom of Information Act requests over the last several months had nearly shut down City Hall, McNutt said.

He said Whiteaker's accusations are false and were made for political purposes.

Whiteaker said he would rather not fight to get the city's records and get to the truth of the city's spending. But he said people have signed petitions and encouraged him to keep up the fight and run for mayor.

"It's not your call," Whiteaker recalled one resident telling him. "You stood up and now you have to follow through."

The lawsuit filed by McCutchen also accused Hall and two other council members of violating the Freedom of Information Act by exchanging texts discussing the calling of the June 21 special meeting to respond to Whiteaker's allegations.

McCutchen wrote in the lawsuit that the texting by the officials constituted a meeting under the Freedom of Information Act for which the public and media should have been given notice.

In answer to the lawsuit, Phillips, representing Ozark, wrote that neither the state's Freedom of Information Act nor Arkansas law recognize text messaging as a meeting.

"Defendant states that the sharing of information among council members is a constitutionally protected right which is not a violation of the provisions of the [Freedom of Information Act]," Phillips wrote.

The judge in the case has granted a motion to stay the lawsuit until the Arkansas Supreme Court decides on Fort Smith's appeal to a January ruling in Sebastian County Circuit Court that is similar to the issue in the Franklin County lawsuit.