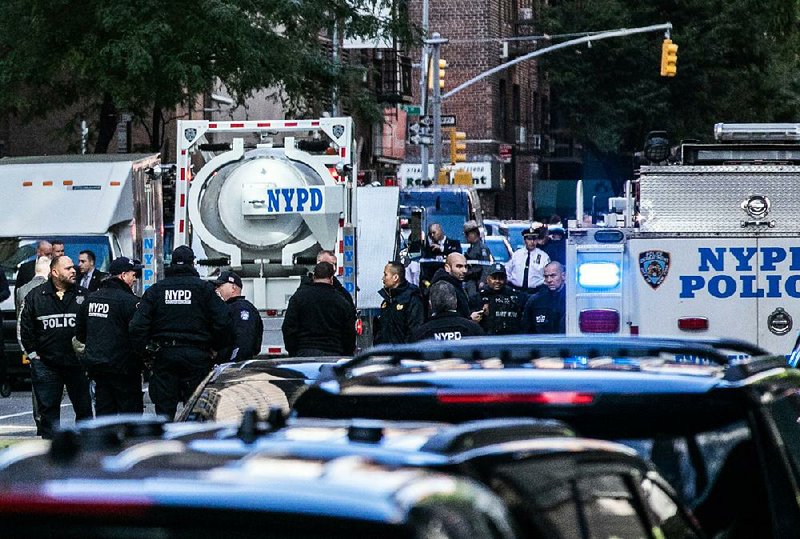 Police investigators gather near a bomb-squad truck Wednesday outside the Time Warner Center in New York, where an explosive device was discovered at the offices of CNN.

THURSDAY UPDATES: Biden package similar to packages that had bombs

Pipe bombs were sent to several prominent Democrats, including former President Barack Obama and former Secretary of State Hillary Clinton, setting off an intense investigation Wednesday into whether a bomber is going after targets that have often been the subject of right-wing ire.

CNN received a similar bomb, addressed to John Brennan, a career intelligence officer who served as Obama's CIA director. The discovery of the device caused a mass evacuation of the Time Warner Center in Midtown Manhattan, where CNN is located.

Later Wednesday, the FBI said two additional packages addressed for Rep. Maxine Waters, D-Calif., had been intercepted and that they were similar in appearance to the ones sent to Clinton, Obama and CNN.

None of the devices harmed anyone. It was not immediately clear whether any of them could have exploded. One law enforcement official said investigators were examining the possibility that they were hoax devices.

The FBI said in a statement that the devices were similar to one found Monday at the home of George Soros, the billionaire philanthropist and liberal donor. Investigators were seeking to determine whether they were sent by the same person or people.

Coming less than two weeks before the midterm elections, the discovery of the pipe bombs reverberated across a country already on edge, stirring anew questions about whether political discourse has grown too vitriolic.

Clinton, Obama, Soros and CNN have all figured prominently in conservative political attacks. President Donald Trump has often referred to major news organizations as "the enemy of the people" and has shown contempt for CNN.

Trump, speaking at the White House on Wednesday, described "suspicious packages and devices mailed to current and former high-ranking government officials," and urged the nation to come together and send "one very clear, strong, unmistakable message that acts or threats of political violence of any kind have no place in the United States of America."

"We're extremely angry, upset, unhappy about what we witnessed this morning, and we will get to the bottom of it," he said.

But Democratic Senate and House leaders Charles Schumer of New York and Nancy Pelosi of California said such words "ring hollow" when coming from Trump. They noted the president's recent praise of a GOP congressman who body-slammed a reporter, among other Trump statements.

"We want all sides to come together in peace and harmony," he said. "Any acts or threats of political violence are an attack on our democracy itself."

He added: "The media also has a responsibly to set a civil tone and to stop the endless hostility and constant negative and oftentimes false attacks and stories."

White House press secretary Sarah Huckabee Sanders said in a statement, "These terrorizing acts are despicable, and anyone responsible will be held accountable to the fullest extent of the law."

Jeff Zucker, the president of CNN Worldwide, contended that there was a "total and complete lack of understanding at the White House about the seriousness of their continued attacks on the media."

"The president, and especially the White House press secretary, should understand their words matter. Thus far, they have shown no comprehension of that," he said.

All the packages were mailed in manila envelopes lined with Bubble Wrap and bearing return addresses with the name of Debbie Wasserman Schultz, a Florida congressman and a former Democratic National Committee chairman, the FBI said. The mailing labels were computer-printed and six first-class stamps were affixed to all of the envelopes.

A device sent to Obama's attorney general, Eric Holder, was apparently misaddressed, and because Wasserman Schultz's name was on the return address, it was delivered to her district office in Florida, the FBI said.

"We will not be intimidated by this attempted act of violence. This appalling attack on our democracy must be vigorously prosecuted, and I am deeply disturbed by the way my name was used," she said. "Today, my staff and I will hug each other and our loved ones tightly, and tomorrow get back to work serving the people I was elected to represent."

The package sent to CNN's offices was delivered by courier, a law enforcement official said. However, it also had a half-dozen first-class postage stamps on it.

Investigators believe the bomb sent to Soros' home was dropped off in his mailbox.

Clinton, speaking Wednesday to about 200 Democratic donors in Florida, said: "It is a troubling time, isn't it, and it's a time of deep divisions and we have to do everything we can to bring our country together."

Speaking at an event in Austin, Texas, Brennan called the spate of pipe bombs "a very unfortunate turn of events," particularly if he and others are being targeted for their public comments.

"Unfortunately, I think Donald Trump, too often, has helped to incite some of these feelings of anger, if not violence, when he points to acts of violence or also talks about swinging at somebody from the press, the media," Brennan said.

Politicians of both parties condemned the mail bombs.

In New York, Mayor Bill de Blasio, a Democrat, called the attempted bombings "an effort to terrorize" and vowed that the city's residents "won't allow terrorism to change us."

Rep. Steve Scalise of Louisiana, who was severely wounded in a 2017 shooting that targeted Republican members of Congress on a suburban baseball field, wrote on Twitter that he had experienced "first-hand the effects of political violence" and said that as a nation "we must agree that this is a dangerous path and it cannot become the new normal."

The first inkling that there might be a serial bomber came Wednesday morning when the Secret Service revealed that it had "intercepted two suspicious packages addressed to Secret Service protectees," who were Clinton and Obama.

The device addressed to Clinton in Westchester County, north of New York City, was found late Tuesday by a Secret Service employee who screens mail for Clinton, the statement said. The package addressed to Obama was intercepted early Wednesday by Secret Service personnel in Washington.

Shortly after the Secret Service made that announcement, the Time Warner Center, a major office complex, was evacuated when a similar device was discovered to have been sent to CNN's offices there.

A senior law enforcement official in New York, describing the bomb sent to CNN, said it was intercepted in the basement mailroom and resembled the others: "Same package. Same device."

That device was constructed from a piece of pipe a little longer than 6 inches and wrapped in black tape with what appeared to be epoxy on the ends, according to a person who had seen a photograph of it.

What could be a timer was attached to the side of the pipe, and wires were visible at both ends.

The pipe bombs were packed with powder and shards of glass, said a law enforcement official who viewed X-ray images and spoke on condition of anonymity to discuss an ongoing investigation.

Like the bomb sent to Soros' home, the envelope it arrived in measured roughly 5-by-8 inches and had a printed white address label and half-a-dozen first-class postage stamps affixed to the outside.

On Wednesday afternoon, New York City's police commissioner, James O'Neill, said the CNN bomb was "a live explosive device" and that it would be rendered harmless and sent to the FBI to be analyzed. The package that contained the device also included white powder that police were testing to determine if it was toxic, he said.

Some bomb technicians who studied photos of the device that circulated on social media suggested that the bomb sent to CNN had hallmarks of fake explosives -- the kind more typically depicted on television and in movies, rather than devices capable of detonating.

An LCD clock was taped to the middle of the pipe, a feature that experts say is typically shown on fictional bombs in a bid to ratchet up dramatic tension, but unnecessary in real life.

FBI Director Christopher Wray issued an appeal for the public's help to catch the culprit and warned people not to touch suspicious packages.

Malcolm Brady, a former Bureau of Alcohol, Tobacco, Firearms and Explosives official who spent decades investigating bomb suspects, said federal agents are carefully poring over the packages for any clues they may hold as to the identity or location of the sender.

"You have to be extremely careful when you examine this stuff, because a piece of tape could have a fingerprint on it," said Brady.

Most mail-bombing suspects are "loner types," said Brady, who added that he doubts that this bomb-maker made a mistake when he used a bad address for Holder.

"That looks like an intentional manipulation of the system, to try to get it to go to [Wasserman Schultz]. I strongly suspect he wanted that package to go to her. That suggests he's really focused on her," Brady said.

As news of the homemade bombs spread, authorities vowed to ramp up security measures. The New York Police Department increased patrols in areas linked to public figures and at media offices.

The Senate sergeant at arms sent a message to senators and their staff members advising them to be cautious when handling mail and reminding people not to carry unopened mail or packages from outside into their Senate offices. 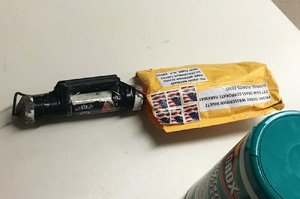 Photo by Courtesy of CNN via The New York Times
The device was addressed to former CIA Director John Brennan. Similar bombs were sent to former President Barack Obama, former Secretary of State Hillary Clinton and other prominent Democrats. 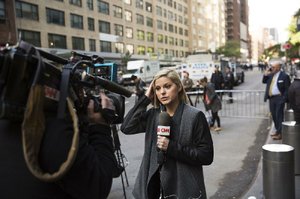 Photo by AP/KEVIN HAGEN
CNN correspondent Kate Bolduan reports Wednesday from outside the Time Warner Building in New York after the cable news network’s offices and the rest of the building had to be evacuated because of the discovery of a pipe bomb. 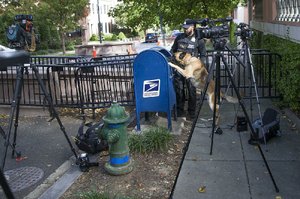 Photo by AP/ALEX BRANDON
A uniformed Secret Service officer and his dog conduct a search Wednesday near the home of former President Barack Obama in Washington. 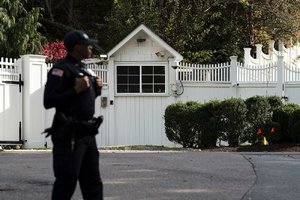 Photo by The New York Times/KARSTEN MORAN
A police officer stands guard Wednesday outside the home of former President Bill Clinton and former Secretary of State Hillary Clinton in Chappaqua, N.Y., after an explosive device addressed to Hillary Clinton was found late Tuesday by a Secret Service screener.
RELATED ARTICLE